More people than ever want to live on the wild edges of Western cities, despite the risk wildfires pose to their homes. A recent study by researchers at the University of Nevada, Las Vegas, found that wildfires drive down real estate prices only in the immediate aftermath of a disaster. Home prices in burned areas typically rebound to pre-fire levels within one to two years. 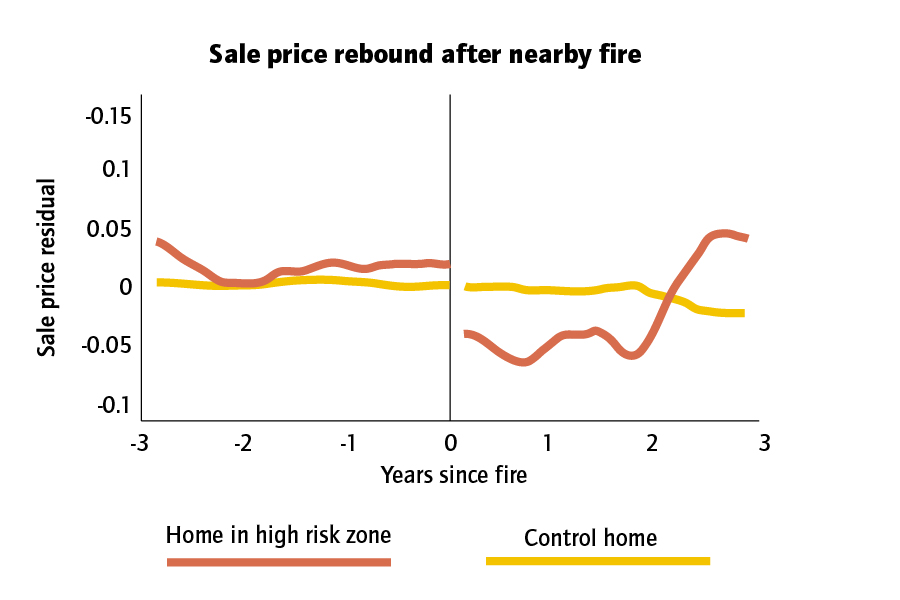 High-risk zones are defined as having high probability of a wildfire based on the physical attributes of the terrain surrounding each property. Homes in these zones see a drop in price following a fire, but quickly rebound and spike less than three years after the incident. Shawn J. McCoy and Randall P. Walsh.

The finding illuminates a troubling trend: Some of the West’s most fire-prone areas — densely forested, scenic, mountain landscapes that are conveniently close to cities — are also some of its most desirable. When more people move into these areas, the cost of fighting fires rises because there is more to defend — more lives and property at stake. On top of that, because people unintentionally spark many wildfires, the overall risk increases when the woods become more populated, as does the potential destruction these fires can cause in terms of property damage and loss of life.

Yet developers will continue to build in high-risk areas as long as there’s a demand. Residential growth in forested areas across the United States has exploded in recent years, from an estimated 12.5 million housing units in 2000 to 44 million by 2010. “We should be worried about that,” said University of Nevada, Las Vegas, research economist Shawn McCoy, who led the study. “The societal costs of wildfire will increase, because people continue to develop there. They know that those homes will sell regardless of the risk.” 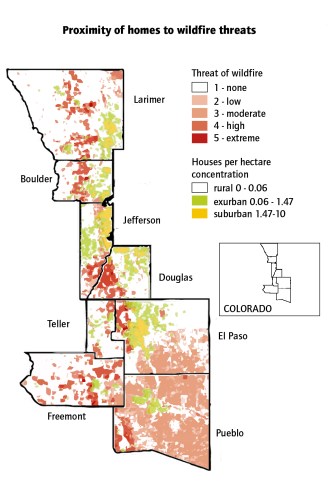 Many homes are in or border zones with the threat of wildfire. As the price of homes in wildfire zones only drops for a short period of time after a fire, there is still high demand for homes in such areas. Shawn J. McCoy and Randall P. Walsh.

McCoy and his team analyzed real estate data from nearly 360,000 properties across eight Colorado Front Range counties, which experienced 18 severe wildfires between 2000 and 2012. They compared the prices of similar houses located in high- and low-risk burn zones before and after wildfires. And they considered the relative risk of homes within those zones, their proximity to recent wildfires, and residents’ views of the burns and their aftermath.

The researchers found that the value of homes within sight of burn scars did dip after a fire and was slower to rebound. But even there, homebuyers’ awareness of fire risk didn’t impact their willingness to invest in those properties. Overall, housing values in the high-risk zones dropped in the year following a wildfire, but rebounded to pre-fire prices in one to two years.

The study area — part of the so-called “wildland-urban interface” — is one of the West’s fastest-growing urban areas. In Colorado alone, nearly 7 million acres fall within it. As more people pack into these areas, the federal dollars needed to fight fires will continue to increase. Already, wildfire suppression accounts for 52 percent of the Forest Service’s budget; by 2021, it’s projected to increase to 67 percent. “We have so many homeowners living in fire-prone areas that we have to come to terms with that,” McCoy said. “How do we protect those people?”