You need to see how this teen greeted Trump’s U.K. visit 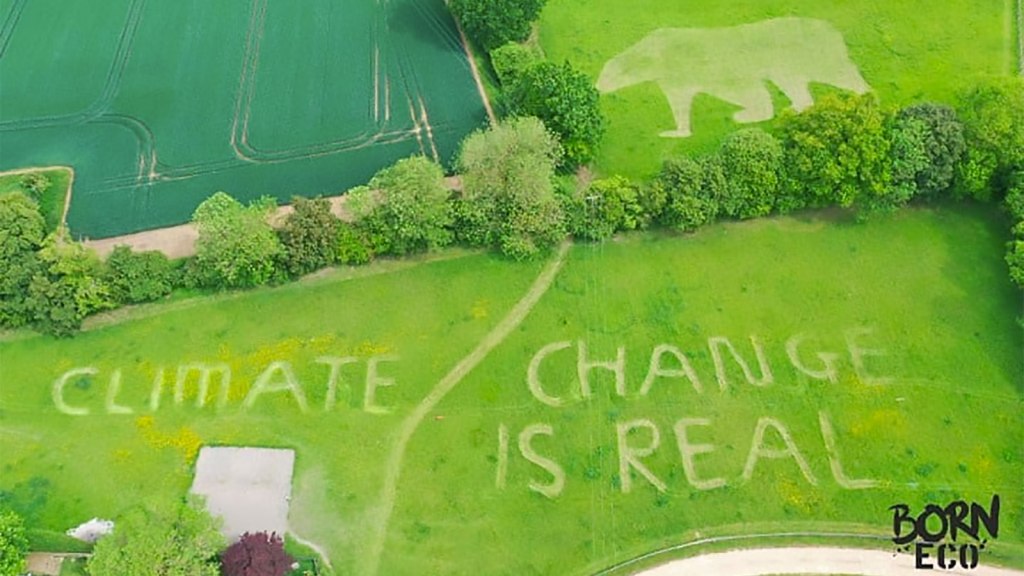 You need to see how this teen greeted Trump’s U.K. visit

How did you spend your weekend? As President Trump and the Royal Family prepared for the president’s highly publicized visit, a British teen was pretty busy getting ready, too.

Ollie Nancarrow spent part of both Saturday and Sunday mowing his mother’s lawn. But this was no ordinary teen chore. The field is reportedly directly in the flight path to London Stansted airport, where Trump landed at 9 a.m. Monday morning, and Nancarrow had a message for the American president that, well, really speaks for itself.

It’s easy to get distracted by the rudeness of his protest, but don’t miss the second half of his message: the words “Climate change is real” accompanied by a large, lawn-sized polar bear.

“Donald Trump and his denial of climate change are not welcome and I want him to be fully aware of that when he flies in to Stansted on Monday,” Nancarrow, an 18-year-old student told his local paper the Bishops Stortford Independent.

Many on Twitter praised the teen for his bold message. However, as we’ve reported here at Grist again and again, the whole ‘save the polar bears’ argument is an older, whiter type of climate activism that is actually pretty ineffective now. What’s most effective? Talking about human health, extreme weather, and the cost of the climate crisis.

“For all of the millions of Americans who have [polar bears] come to mind, none of them live on the shores of the Arctic Ocean, in Antarctica, or next to a glacier,” Anthony Leiserowitz, coauthor of the analysis and director of the Yale Program on Climate Change Communication, has told Grist. “It reinforces the sense that this is far away.”

Still, we also don’t see how Nancarrow could’ve mowed someone dying from air pollution into a lawn, so A+ for effort.

Though many news outlets focused on the phallic nature of his protest, Nancarrow later tweeted, “This is not an anti-Trump message. This is a message about climate change, and his denial of climate change.”