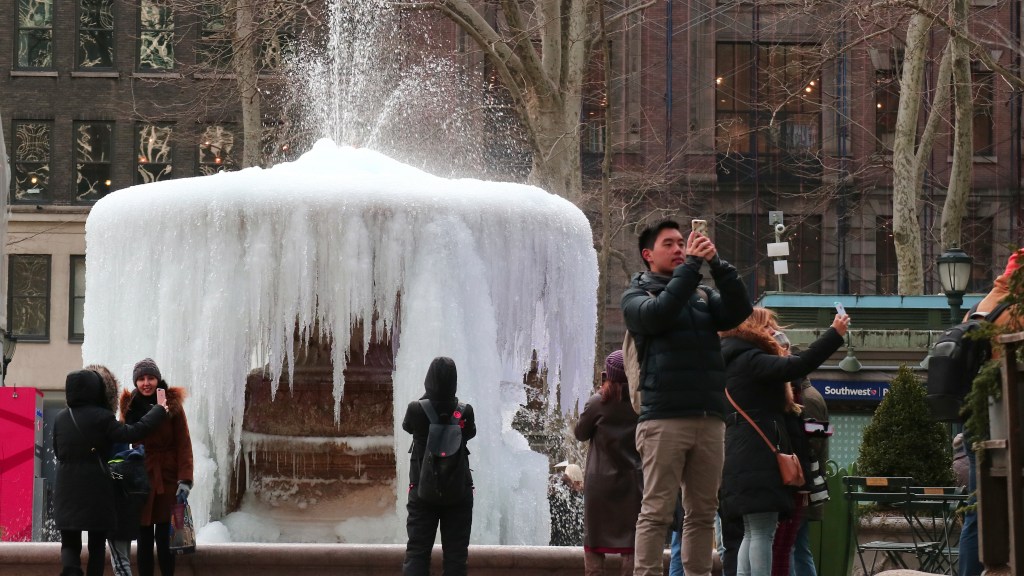 Every time someone in a position of power (for example) says that a cold snap in winter proves that climate change is not a thing, a dutiful chorus responds with a familiar refrain: Weather is not climate. Weather happens on the scale of days or weeks, over a distance relevant to cities or states. Climate happens over decades, centuries even, to an entire planet.

The problem is, guess what timescale and space-scale people live on?

The question of what can make human beings understand climate change is literally an existential one. It’s complicated by humans’ pathetically short lifespan and their attention-span, roughly akin to that of a cat in a laser-pointer QA lab. How can anyone expect people to grasp the planetary, millennium-encompassing implications of their half-remembered actions? There’s bad news on that front, and as is customary with bad news, it comes from Twitter.

From a database of 2.18 billion tweets sent by 12.8 million people in the continental U.S. — stripped of all identifying information except for date and location — a team of climate researchers isolated the ones that talked about the weather. Specifically, they looked for tweets talking about whether it was hot or cold. And then they compared the volume of those tweets to the “reference temperature” for the county where they originated; which is to say, they looked at historical data for whether that county was seeing an unusual number of hot or cold days over time.

In one respect, the researchers found what you might intuit. People bitch about the weather when the weather’s bad. But then, curiously, they stop. What used to seem extreme starts to seem normal. “If you have a recent history where you have abnormally warm or colder temperatures, that reduces the probability you’ll tweet about the weather,” says Fran Moore, an environmental scientist at UC Davis and lead author of a paper about this in the current Proceedings of the National Academy of Sciences.

It’s not that people get used to that new normal, though. They just get sort of blind to it. Moore and her colleagues ran the non-weather tweets from their Twitter corpus through two different automated systems for sentiment analysis, the Valence Aware Dictionary for sEntiment Reasoning (VADER) and the much less cool-ly initialized Linguistic Inquiry and Word Count. Sentiment analysis is still a field where smart people could disagree on whether it works, but even so, both analyses of the emotional content of these tweet streams showed the same thing. “People stop tweeting about these unusual temperatures,” Moore says, “but as best we can tell, the temperatures are still making them kind of miserable.” Yes, miserable even for Twitter.

It has been about a century since people began pumping greenhouse gases into the atmosphere in earnest. Climate researchers rely on millennia-old data like tree rings and ice cores to show change. But, Moore says, it takes just about five years for people to forget what used to be normal. The cartoonist Randall Munroe had it right in a 2013 XKCD strip: “What used to be normal now feels too cold.” And that worries scientists like Moore, because it might mean that people essentially get amnesia when it comes to climate change. The variation is too subtle for anyone to notice or do anything about — until it’s not, when it’s too late. Which, arguably, is now.

Broadly this idea is called “shifting baseline syndrome.” As happens a lot when it comes to ecological disasters, the ocean researchers noticed it first. As commercial fisheries fall apart, what constitutes a “large catch” gets defined downward, as the marine biologist Daniel Pauly wrote in 1995. As the overall climate takes on the quality of non-stationarity — where past performance no longer predicts future events — memory gets shorter and shorter. It’s not historical, nor generational, nor even extending as far back as childhood; all we’re left with is now.

Or maybe not. Don’t panic. “It’s an important finding to see what they call the remarkability, the noticeability, of these unusual weather conditions tends to decline over time,” says Peter Howe, a geographer at Utah State University who studies people’s understanding of climate. “The effect they’re finding is real. What it poses are some interesting questions about how that relates to perceptions and opinions.” In Howe’s own work, which uses survey data as opposed to the clever expediency of social media, people in 89 different countries have been able to tell when the overall temperatures were going up.

Weirder still, the weather didn’t change people’s minds about climate change as much as the other way ‘round. People who understood that human activities were warming the planet were more likely to perceive weather events as being related to climate change. Those who didn’t, didn’t. And people’s opinion about climate change correlates with nothing so highly as their political affiliation. “Our pre-existing belief about the issue, driven by political factors and other things, shapes what we think we’ve experienced,” Howe says.

Yet even that baseline is shifting. Data from surveys conducted by the Yale Program on Climate Change Communication show a marked change over the last five years. Since 2013, the number of Americans who are worried about climate change has gone up 16 percentage points, to nearly 70 percent overall. The number who think it’s human-caused has gone up 15, to 62 percent. Those trends hold across the survey — and across political leanings, as well. So, sure, 95 percent of self-identified liberal Democrats are “very” or “somewhat worried” about global warming. But so are 32 percent of conservative Republicans, up from just 14 percent five years ago.

The quinquennial National Climate Assessment and the Worldwide Threat Assessment of the National Intelligence Community emphasized the present, ongoing dangers posed by human-caused climate change, from extreme weather to deaths from heat to disease outbreaks to displaced persons. More than a fifth of all the corn planted in the U.S. is genetically modified to be drought-tolerant, suggesting that no matter what farmers think about climate change, they know the climate is changing. Even petrochemical companies acknowledge in court, on the record, that climate change is real, dangerous, and human-caused (while continuing to pump out of the ground and sell the chemicals that cause it — arguably their fiduciary duty, genocidal though it may be).

Despite the mnemonic frame-drag suggested by Moore’s Twitter research, most of the country is on board with getting something done about climate change, whether it’s a Green New Deal or some other attack on the problem. As a climate scientist (herself something of a skeptic) observed to Andrew Revkin in National Geographic, the last bastion of disbelief is the White House — which is, let’s be honest, one hell of a bastion.

The next step, then, is to figure out what makes people believe humans are changing the climate even as their own baseline shifts. “We’re not trying to say that this result means that no one’s going to believe in climate change, because people’s own experiences of weather are not the dominant piece of information they use,” Moore says. “What you could say is that you can’t expect people’s experience of weather alone is going to passively convince them.” So next she’s going to try to figure out if events other than temperature change might have more of an impact — wildfires, hurricanes, or coastal flooding. Weather definitely isn’t climate, but extreme weather may still change some minds.