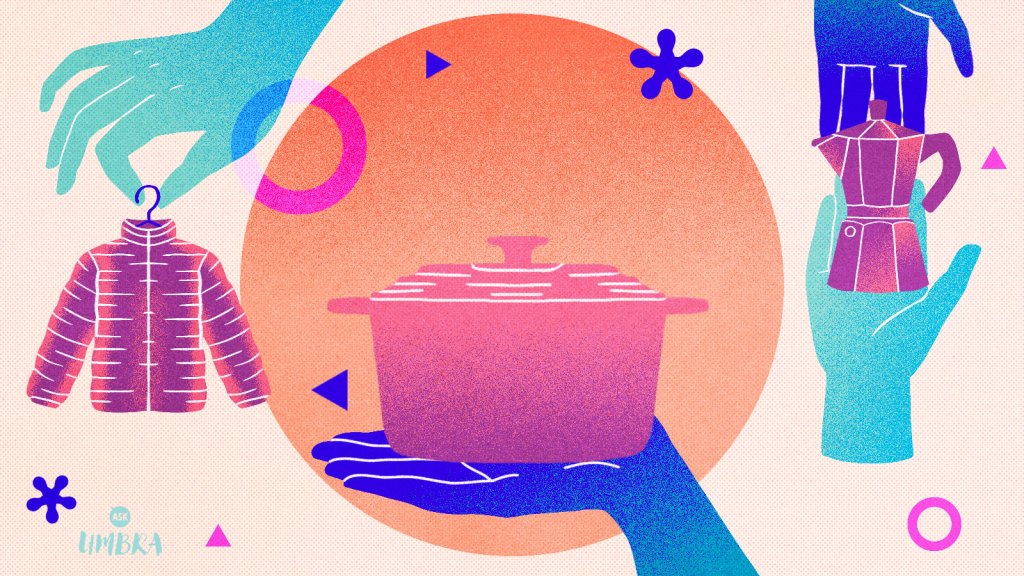 Grist / Amelia Bates
That Was A Freebie

How do I tell who is really deserving of giveaways in my Buy Nothing group?

— Reducing Our Belongings Is Nice

First of all, kudos to you for being part of your local reduce-reuse-recycle crowd. For those unfamiliar with the Buy Nothing Project, it’s a network of neighborhood-specific Facebook groups where people can offer up or ask for items without exchanging any cash. The environmental benefit of these groups is twofold: The giver isn’t chucking their discards into the landfill, and the receiver isn’t buying something new unnecessarily. And there’s a socially sustainable angle too: By sharing resources, you’re strengthening community bonds

But as Buy Nothing veterans know, giveaways can get rather, well, competitive. Here’s a familiar scenario: You have a fairly desirable item to give away — a Le Creuset casserole dish, a seldom-used espresso maker, a Patagonia ski jacket that doesn’t fit anymore — and you post it to your local Buy Nothing group. Ten minutes later, you have 100 people clamoring for it in the comments section. Who deserves it?

This dilemma unearths — as you seem to suggest in your question — a whole litany of thorny social issues, starting with the very concept of “deserving.” If we interpret “deserving” to mean the highest degree of desperation, that brings up the unsavory prospect of asking people to outdo each other in demonstrating their need — on a non-anonymized public forum, no less.

But assessing need is wrapped up in the very definition of sustainability, at least according to a 1987 report from a United Nations commission. That group interpreted sustainable development, specifically, to mean something that adequately serves people alive today without compromising the needs of people alive in the future. “It contains within it two key concepts,” the document reads, “the concept of ‘needs’, in particular the essential needs of the world’s poor, to which overriding priority should be given; and the idea of limitations imposed by the state of technology and social organization on the environment’s ability to meet present and future needs.”

Great, so in essence, there are a finite amount of resources in the world, they’re not evenly distributed, and we should first and foremost focus on meeting the needs of those with the least access to those resources. One could definitely argue that the purpose of Buy Nothing groups very much lines up with that general ethos, until you get to that whole “those with the least access” part. Many groups leave it up to individual members to choose a “winner.” Some givers go with a “first come, first serve” approach, which can help them get rid of stuff in a timely manner. Others — like yourself, it seems — are willing to wait in order to get items to those with more need. But in the context of giving away your unneeded or unwanted possessions, how are you supposed to tell who falls into that category?

I believe in your good intentions, but I can’t see a way to execute them that isn’t at least partially problematic. In American culture, there’s an enormous amount of shame associated with being in a position of need. Some people equate need with some kind of moral failing, i.e., “you must have done something wrong somewhere along the way to not have enough to take care of yourself and your family.” Obviously, anyone aware of the United States’ many disparity-laced systems — healthcare, student debt, and lending practices, to name a few — understands that this is not the case, but emotions are not necessarily tied to fact.

The shame tied to not having enough is actually part of the origin of the whole Buy Nothing Network, according to Rebecca Rockefeller, one of its co-founders. She started the first Buy Nothing group about seven years ago when she found herself single-parenting on Bainbridge Island in western Washington. She had very little money, and found the various processes that she had to go through to obtain government benefits “endlessly demoralizing.”

“The system was designed to make me focus on how little I had, and it made me just feel like I was being judged as a bad person because I had these economic circumstances out of my control,” she said.

Rockefeller set up a Saturday free market where she and her neighbors could bring what they had to exchange, and she was able to barter food for her family with things she had grown or made. She described the experience of being in a position to give something to her community, as opposed to being wholly dependent upon them, as transformative.

“We need to be able to be generous and expect generosity, and that’s part of living in a community with people where you’re not put on these different hierarchical levels of power, but where compassion and generosity are a flat field,” she explained. That’s why she says the Buy Nothing community tries to frame every exchange as a gift from one person to another, rather than a transfer of wealth from haves to have-nots.

That being said, Rockefeller said it’s natural for some Buy Nothing members to fall into a “scarcity mindset,” fearing that if some undeserving people are benefiting too much — say, one particular person seems to hover over the high-value giveaways — then somehow the larger group will suffer for it. This is where, she suspects, your qualms about your giveaways going to the “right” person come from.

It all comes back to the U.N. definition of “sustainability” as being grounded in limited resources. There are clear examples of situations where a “scarcity mindset” is appropriate. For a painfully current example, see many cities’ highly chaotic rollouts of COVID-19 vaccine. When it comes to life-saving and limited resources, it does make a lot of sense for them to go to the people who need them most, which is why there are “tiers” of recipients.

But most American communities — not individual households but communities as a whole — do not suffer from a lack of stuff. Just because your unwanted toaster oven did not go to the “worthiest” candidate does not constitute a moral failing. In Rockefeller’s words: “All giving is good giving and it’s all equally important”

You are not solely responsible for efficient redistribution of wealth; you are, instead, building a culture of generosity that will inevitably better serve those who really need it. And by growing closer with the people in your community, you’ll become better aware of their needs, including those they might not feel comfortable sharing on an online forum. After all, a real, “sustainable” giving economy can’t rely solely on isolated transactions!