Will breaking up with my long-distance girlfriend help save the planet? 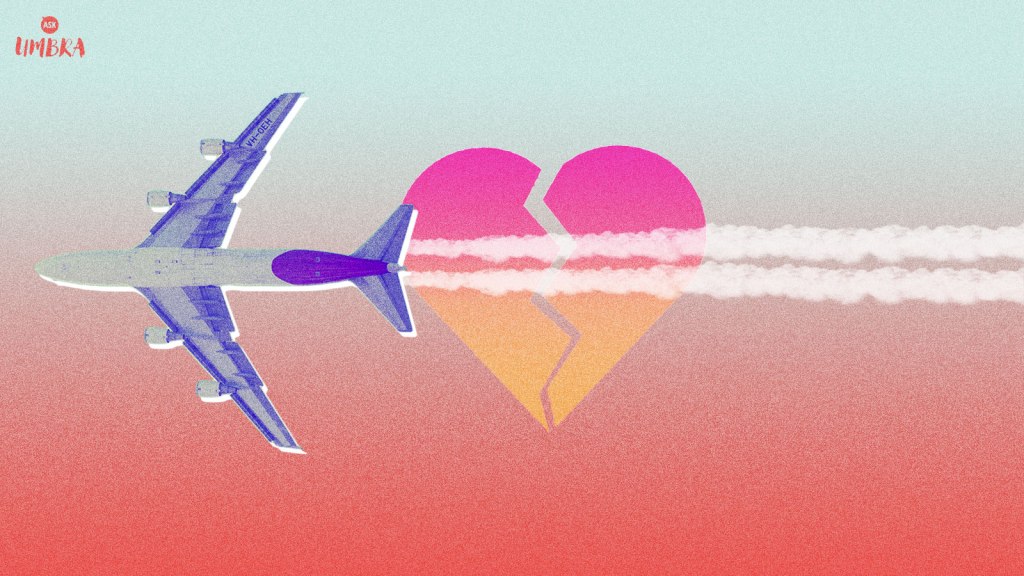 Will breaking up with my long-distance girlfriend help save the planet?

Q.My girlfriend lives overseas, so I have to fly to see her, but I feel guilty about climate change. Is breaking up better for both of us?

You’ve hit upon a new twist on an age-old question: Does absence make the heart grow fonder, or just help the climate grow warmer? Well, you’ve come to the right place. Your timing, however, could use some work given that (1) it’s Valentine’s week, and (2) our resident Umbra aka Eve Andrews is on a well-deserved vacation this week, leaving you with a Substitute Umbra whose main qualifications for answering an advice column question about transportation are tweeting a lot about bike lanes and having no patience for un-self-aware car movies. Oh, I also read advice columns obsessively and collect my favorite letters in a weekly round-up for Digg, which is either a qualification or a symptom of deeper psychological problems. Regardless, I, Grist’s news editor, am here to channel the spirit of Umbra in the service of addressing your question!

Putting matters of the heart aside for a moment, let’s start by acknowledging that green commercial air travel is, at the moment, a fantasy. Electric planes? Hampered by feeble batteries. Biofuels? Still too expensive to compete with conventional jet fuel (and also maybe not great for the environment). Carbon offsets? Worse than nothing, according to some climate researchers. Unless you have a friend with a solar-powered yacht and several weeks’ travel time to spare, each overseas trip is basically guaranteed to add a ton or two of carbon dioxide to the atmosphere.

However, I want to distinguish between the relative carbon footprint of flying and the absolute carbon footprint of flying, since the difference tends to get elided in conversations about flygskam. Yes, flying is the single most carbon-intensive activity the average person can do. But that doesn’t necessarily mean that cutting out —or cutting back on — flying is the biggest step you can take to reduce your personal carbon footprint. The average American adult only makes 2.1 round-trip flights a year. If you drive a combustion-engine car 30 miles to and from work every weekday, then switching to a bus or commuter train —or changing your life so you live close enough to your job to walk or bike to work —could make a bigger emissions dent than eliminating 2.1 round-trip flights. If you eat beef three times a week, switching to beans could make a bigger impact than eliminating 2.1 round-trip flights.

What I’m trying to say is that when you’re thinking about your carbon footprint, you have to take into account not just carbon-intensity but also frequency. You haven’t told me how many miles or how frequently you and your girlfriend travel to see each other, LONG DISTANCE, but it’s possible reevaluating other habits could have a bigger impact on your joint carbon bank account than, say, breaking up.

Then again, there’s a Kantian argument for flying as little as possible —or not at all. Globally, commercial air travel still only accounts for 2.4 percent of humanity’s greenhouse gas emissions. That doesn’t sound so bad, right? Unfortunately, the U.N. says that scanty figure is projected to triple by 2050 —and independent researchers say that air travel emissions are actually rising 1.5 times faster than the U.N.’s estimate. The reason commercial air travel’s overall carbon footprint is so small today is that most people in the world can’t afford to do it. If everyone in the world flew as frequently as the average American, we’d be looking at a global catastrophe.

I think it’s reasonable to limit personal behaviors that would result in disaster if everyone did them. “Convenience for me but not for thee” is not a great look on anyone. But I also think some reasons for flying are more justifiable than others.

Business travel, in my book, is the least justifiable reason to fly. In the year of our Lord 2020, email, phone calls, and teleconferencing can suffice for 98 percent of business communications needs. If you simply must get on a plane once a year to see remote colleagues face-to-face or to attend the preeminent conference in your field, I’ll allow it. But if you’re getting on a plane every other week to meet clients, I humbly suggest that your company’s business model could use some updating.

Traveling for vacation, or to “see the world,” is only a moderately better reason to combust tens of thousands of gallons of jet fuel than business travel. It’s not that the benefits of vacation aren’t important — everyone deserves the opportunity to enjoy a change of scenery, take a break from the daily grind, meet new people, learn new things, and appreciate the beauty of nature. But, as Real Umbra has argued, no matter where you live, you can almost certainly obtain those benefits by traveling to a destination nearby enough to reach by bus or train.

The highest purpose of air travel, as far as I’m concerned, is traveling to see someone you love.

I’ve never been in a long-distance relationship, but the main reason I won’t commit to giving up air travel is that it would basically mean never seeing my sister, who lives 1,500 miles away from me. (Well, maybe someday the stars will align for me to spend four days and $1,300 to travel from New York City to Houston round-trip via Amtrak, but it hasn’t happened yet.) Phone calls and Skype and Facetime are better than nothing, but they are quite simply no substitute for being in the same room as one of your favorite people in the whole world.

Never seeing my sister in person again is, quite simply, unthinkable to me. And yes, I know that people who don’t have the money to pay for plane tickets have to go without seeing their loved ones all the time, and my heart breaks for them. I want everyone to be able to hug and stare into the eyes of and share a meal with the people they love every once in a while, no matter how far away those people live!

The whole reason you and I and (I assume) your girlfriend are fighting to save our planet from an incendiary future is that we want to preserve the things that matter, right? At the end of the day, nothing matters more than our relationships with the people whom we love and who love us. I want to live in a world where most people don’t have a car, where most long-distance travel happens via high-speed train — and where people still get on commercial airliners every once in a while to reconnect with faraway family and friends. (Hopefully, electric plane battery technology will be better by then.)

So if you love your girlfriend, if never seeing her again is simply unthinkable to you, then no, you shouldn’t break up with her. Instead, you should do whatever you can to reduce the carbon impact of the travel required to see each other.

If one of you currently flies to see the other once a month, could you cut back to once every other month instead, and maybe prolong each trip by a few days to make up for lost time? I know, I know; work and other obligations make long trips difficult, but if remote work is a possibility for one or both of you, you should take advantage of it! Could you always fly nonstop instead of choosing trips with layovers, even if it’s more expensive? Since most of the emissions associated with flying occur during takeoff, it’s more climate-friendly to take one long flight than multiple short flights. Could you buy economy tickets instead of business or first class? Packing people in like sardines is more fuel-efficient than giving them space to fully extend their limbs. Could you make a donation to a group or a politician fighting for policies that will radically reduce carbon emissions over the next decade — even knowing that those policies might make your plane tickets more expensive in the future?

I also urge you to consider making a serious plan to live in the same place in the next year or two, if you don’t have such a plan already. Carbon emissions aside, it’s too painful to live hundreds or thousands of miles away from the person you love with no end in sight. I may not have been in a long-distance relationship myself, but I know enough about them to assert that the long-distance part usually needs to have an expiration date.

That’s my advice for if you love your girlfriend, DISTANCE. But … do you love her? You haven’t given me much to go on, but I think there’s a non-zero chance you are looking for a reason to break up with her and have landed on climate change as an ironclad excuse. If that’s the case, please be honest with yourself. It’s OK if you don’t want to be in this relationship! But when you break up with your girlfriend, don’t tell her it’s because of climate change; tell the truth and say it’s because the relationship isn’t working for you. And do it over the phone (not text!) before your next scheduled trip to see each other.