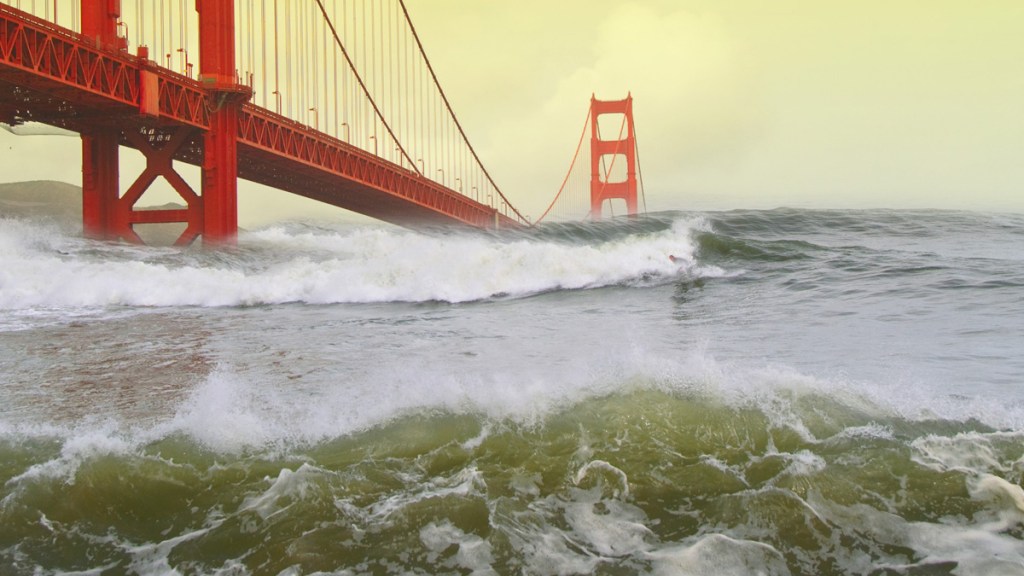 Close your eyes and imagine yourself at your favorite beach. Swells rise around your tanned hips. A bottle of beer and a joint are held safe and dry above your head. You’re sporting a revealing little bathing suit over a younger version of your hot self, airbrushed to perfection using the power of imagination. And there are no cops around to spoil the fun.

Now imagine what that beach would look like if the water was 15 feet higher. Your beer and your ganja are now full of saltwater, and you’re struggling just to keep your head above the waves. Unless your favorite beach is at the bottom of a cliff, nearby buildings are under water, taken over by invasive communities of pineapple-dwelling, square pants-wearing sponges.

That’s not some outrageous scenario dreamed up by liberal scientists with global warming agendas. (The sponge bit was admittedly outrageous, but you can blame me, not the scientists, for it.) No, it’s where sea levels were 120,000 years ago: 15 feet higher than they are today.

Fast forward to 20,000 years ago, when the world was nearing the end of an ice age. Vast stretches of today’s oceans were ice cubes, and as a result, sea levels were 400 feet lower than they are today. What now are tropical near-shore islands back then were frigid hills.

The seas rose again between 20,000 and 6,000 years ago. Then they started rising again early in the 19th century. (Whatever else was happening during the early 19th century, hmmm? A little polluting something called the Industrial Revolution, perhaps?) The seas have been rising ever since, and as a result, land is losing territory to the seas, which are eight inches higher now than they were in 1870.

Scientists can’t be sure how quickly or how badly the world is going to flood, but they have published a variety of estimates based on the amount of pollution we pump into the atmosphere in the coming years. All the scenarios are pretty apocalyptic, though we’ve factored out the possibility if sudden ice cap collapse, which would create an even more dramatic deluge. So what the hell: Have a little fun on the way down and choose your own adventure!

Adventure No. 1: If you decide to quickly switch from fossil fuels to renewable energy …

We’ve already pumped so much carbon into the air that some continued sea-level rise is inevitable. In a June paper in Nature Climate Change, scientists led by researchers from Germany’s nonprofit Climate Analytics estimated that if all human carbon emissions were halted by 2016, the seas would still rise 23 inches between the start and end of this century. (They’ve already risen 1.5 inches since 2000.)

Two feet of flooding could wipe out beaches, inundate sewage systems and waterfront power plants, and draw storm surges into coastal cities. But it wouldn’t be end of the world. We could prepare and adapt as the seas rise, retreating in some places and using marshes as wave surge barriers in others. In some flood-prone places we might want to build homes on stilts like they do in New Orleans. New freeways and rail lines could be elevated or built well inland.

The rate of sea-level rise would peak in 20 years at a third of an inch annually, slowing to about its current rate by the end of the century. We could slow it even further if we manage to do something about all that excess carbon filling our air, such as replanting forests, restoring wetlands and marshes, and injecting carbon dioxide into empty oil wells.

Adventure No. 2: If you decide to gradually switch to renewable energy…

This is the mediocre goal pursued (half-heartedly, so far) by most of the world’s governments, which agreed at the 2009 Copenhagen climate talks to limit global warming to less than 2 degrees C, or 3.6 degrees F. Under this scenario, the Nature Climate Change paper estimates that seas would rise by 30 to 32 inches this century.That might not sound like much, but that additional seven to nine inches of water (above the levels in Adventure No. 1) would lead to substantial additional flooding, leading to the evacuation of more homes and the destruction of more coastal infrastructure, including levees built in the coming decades to protect cities such as New York and San Francisco.But the biggest difference between the first and second scenarios would be the rate at which the seas would still be rising at the end of the century. If we choose Adventure No. 2, the seas will still be rising by close to a half an inch a year in 2100 — and, barring major reforestation and other carbon “sequestration,” they will continue to rise until 2300 and beyond.

Adventure No. 3: If you decide to go with the flow and accept the status quo …

Continue the way we’ve been going, and we could see an increase in global temperatures of 10 degrees F by the end of the century, resulting in 55 inches or more of sea-level rise, according to models used by the National Research Council. To see what your city would look like under that much water, head over to NOAA’s website and use their nifty mapping tool.Here’s a map of what San Francisco would look like:

Piers all around the city and low-lying coastal roads are under water. Treasure Island and the Port of Oakland are largely inundated. And not shown on this map: Because nearly half of California’s rain and snowmelt eventually drains into San Francisco Bay, inland storms and melting snows would lead to regular flash flooding throughout the region.

All of the city’s coastal neighborhoods and the harbor islands would flood, as would most of Fort Point. Storms such as Sandy would lead to deep flooding at Quincy Market, the New England Aquarium, and scores of other landmarks.

And that’s just the beginning. In this adventure, the seas just keep on rising.

Adventure No. 4: If you decide to burn, burn, burn until all the glaciers and ice caps melt …

Just how far could this go? To peer into the long-term future of unmitigated fossil fuel burning, it helps to look back 65 million years, when the planet was so warm that it bore no ice. At that time, sea levels were 250 feet higher than they are today. Among other things, 250 feet of sea-level rise would fully submerge the Roosevelt Island Tramway in New York City and the deck of the Golden Gate Bridge. Storms would be intense and their surges would deluge inland areas that are currently miles from the coast. The heat would be intense and the weather in many places would be intolerable.And if the seas ever do rise by 250 feet, your descendants living this misadventure may find themselves living cramped lives with other climate refugees on a shrinking continent in what once was a hilly inland city, complaining about that damned heat. They may even find themselves envying the underwater lifestyle of Spongebob Squarepants — that is, if ocean acidification hasn’t already wiped him and his pineapple home from the bottom of the rising seas.