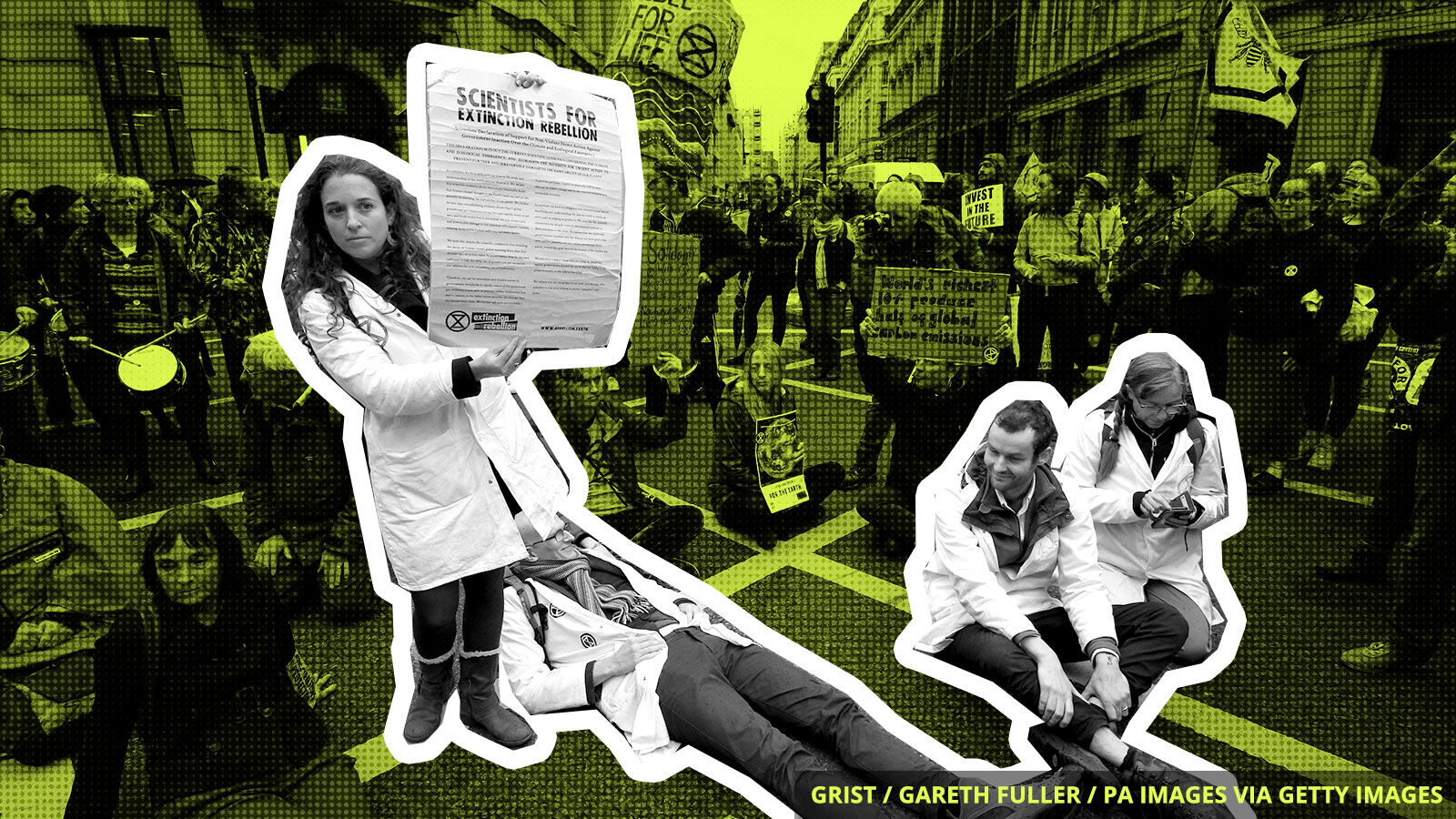 Extinction Rebellion — a climate activist group based in the U.K. — launched a mass civil disobedience campaign last week in 60 countries worldwide, including the Netherlands, the United States, and China. The group took over roads and bridges, prevented planes from taking off, and splattered fake blood over the Charging Bull on Wall Street, all to put pressure on governments to slash greenhouse gas emissions.

More than 900 climate scientists and experts (and counting) have pledged their full support for the movement, adding their signatures to a declaration stating that government inaction “justifies peaceful and nonviolent protest and direct action, even if this goes beyond the bounds of the current law.” Some of these scientists, wearing white laboratory coats, gathered outside London’s Science Museum on Saturday to read aloud the declaration. Although they tend to avoid taking a political stance, scientists now feel that it is their “moral duty to take radical action,” one of them told Reuters.

The signatories include climate experts who contributed to the U.N.’s Intergovernmental Panel on Climate Change, or IPCC, which has released report after report emphasizing the drastic consequences of the climate crisis if we fail to take concrete action.

Guess the London police didn’t get the memo. On Monday, the Metropolitan Police issued a citywide ban on Extinction Rebellion protests. Anyone who fails to follow the ban will face arrest and prosecution, the Met said in a statement. Given that getting arrested is an explicit part of Extinction Rebellion’s strategy, it’s safe to say the movement isn’t going anywhere.

As part of the Trump administration’s ongoing effort to undermine the work of government scientists, Bureau of Land Management staffers who assess the environmental effects of major projects on public lands will be split up and assigned to new posts out West, according to internal documents obtained by the Hill. “Staff is being scattered so they can’t work together efficiently and effectively,” said a former BLM official who worked at the agency for almost 40 years.

Warming temperatures are contributing to “alarming” levels of hunger in five countries, according to this year’s Global Hunger Index. Despite a global decline in poverty and an increase in funding for food security, extreme weather events like drought and heat waves are threatening food production, and the problem will only get worse, according to researchers.

Exposure to high levels of air pollution during pregnancy increases the risk of first-term miscarriage, according to a study published Monday. The study looked at miscarriage rates for more than 250,000 women living in Beijing, where air quality is notoriously poor, between 2009 and 2017.

Are you itching to learn more about the future of climate policy in the Emerald City? Please join Grist, Chief Seattle Club, 350 Seattle, and more for a city council candidate forum about the Urban Indian Experience and What a Green New Deal Means for Seattle. Happening this Friday, October 18th, from 6:30-8:30pm at KEXP in Lower Queen Anne. The best part? It’s free with RSVP!

California says no to drilling