“It’s not easy being green” is a tired cliché, but it’s still particularly true if you are a giant technology company. Even Apple, Facebook, and Google — the best of the bunch, according to a new report from Greenpeace — will have to put in serious additional effort to fully shift to clean energy, especially in terms of lobbying at the state and local level. And the industry laggards, which include Amazon and eBay, have that much further to go. 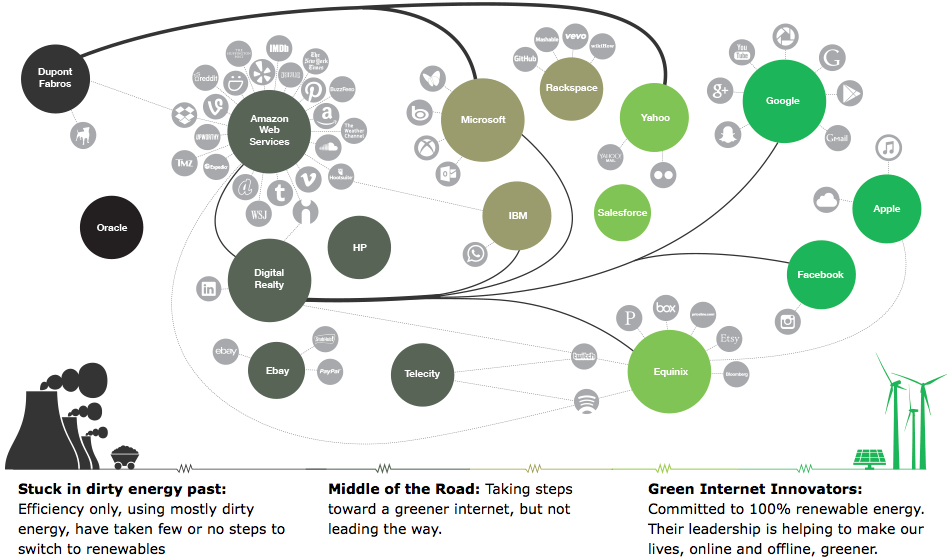 Energy efficiency in traditional appliances keeps improving, but our demand for energy is boosted by new technologies. In particular, companies that manufacture mobile devices and provide services like email, social networking, cloud storage, and streaming video have to contend with constantly escalating demand for data storage.

At the same time, being eco-friendly is important to many of those same companies — or at least important to their public image. Google, Facebook, Yahoo, and Microsoft all dropped out of the American Legislative Exchange Council (ALEC) last year because of bad publicity around the right-wing corporatist group’s opposition to action on climate change. But tech giants will need to do a lot more than quit dirty lobbying groups, Greenpeace argues; they’ll need to actually get involved in the political sphere on behalf of clean energy solutions.

First, the good news is that some tech companies are making respectable efforts to power their operations through clean energy sources. Google has invested heavily in solar energy, and Apple announced just yesterday that it’s expanding its renewable programs to manufacturing facilities in China. But in many cases, the issue is not whether companies have good intentions but whether clean energy is available to them.

Here are a few key quotes from the Greenpeace report:

And here are some challenges the report lays out:

The underlying problem in many cases is that dirty energy–dependent utility monopolies are providing the electricity for massive, and growing, data centers. If these utilities use coal or natural gas, then by extension so do the tech companies with data centers in their service areas. Meeting data-storage demand without burning more fossil fuels will not be easy. Greenpeace writes:

Big data’s massive growth is expected to continue with the emergence of cheap smartphones: nearly 80% of the planet’s adult population will be connected to the internet by 2020, and the total number of devices connected to the internet will be roughly twice the global population by 2018. Internet traffic from mobile devices increased 69% in 2014 alone with the rapid increase of video streaming to mobile devices, and mobile traffic will exceed what is delivered over wired connections by 2018.

There are different ways to increase renewable energy supply at data centers. The first, of course, is simply to generate clean power on site with solar panels or wind turbines. Apple is already doing this and other companies are following its lead. But data centers require so much energy that they won’t generally be able to cover most of their needs that way. Other free-market approaches include power purchase agreements, in which the tech companies can make a deal with a clean energy supplier, and “green tariffs,” in which they agree to buy 100 percent clean power from the local utility at a price premium.

To get all their energy from renewables, though, will require tech companies to engage in policy debates. Greenpeace writes:

Greenpeace argues that tech companies particularly need to get engaged in state and local politics, forming an effective counterweight to the fossil fuel and right-wing interest group money that has swayed state legislative races and outcomes in recent years. Last year, Facebook and Microsoft submitted comments to the Iowa Utilities Board in favor of distributed electricity generation, but that was a relatively isolated event. That sort of activism needs to become routine.

In North Carolina, for example, Greenpeace notes that it’s illegal to buy renewable energy from a third party instead of buying whatever dirty energy is offered by state monopoly Duke Energy. The same state legislature that is offering tax incentives to attract data centers is considering changing that law. Tech companies should tell North Carolina that doing so is a precondition to getting any data centers located there, Greenpeace argues. Similarly, Virginia has a harsh cap on third-party clean power purchases, and the State Corporation Commission is due to review that rule this year.

You can be sure that the utilities, the Koch brothers, Art Pope, and Americans for Prosperity will be involved in these fights. If clean energy supporters are not, they will be over before they have begun. To really be green, tech companies need to put their muscle into this fight.

Correction, 13 May 2015: Because of an editing error, this article originally stated that Twitter was one of the industry laggards named in Greenpeace’s report. In fact, Twitter was not evaluated in this year’s report, though Greenpeace did give Twitter bad grades in last year’s report.