One recent Friday morning in Oakland, Calif., Alexis Shusterman rode the bus to the end of the line and walked up to Montclair Elementary School carrying a backpack full of tools: a tiny computer screen, a keyboard, and a light-up extension cord that she uses to test whether an outlet is live or dead. When you install and maintain atmospheric testing equipment on the rooftops of strangers, you quickly come to cherish a good outlet.

Here’s how I wound up with Shusterman that day: A few months ago, I wrote an article about Aclima, a company that was trying to generate more fine-grained, location-specific air quality maps by networking together a lot of low-cost air quality sensors, generating tremendous amount of data, and then writing programs that comb through that data, looking for patterns.

It all sounded impossibly cool, but except for a few flashy demos, the results were strictly private data, collected for private customers. The company didn’t want to reveal any specific findings. What, I wondered, what would an open-source version of this kind of research look like?

There are a few examples out there. Safecast, for example, has crowdsourced radiation data from around the world ever since an earthquake damaged the Fukushima nuclear power plant in 2011. Measuring air quality is more difficult. When Congress exempted oil and gas from the Clean Air and Clean Water Acts, funding for air quality monitoring and research virtually disappeared in many states. Air pollution is tougher to quantify than radiation — the equipment needs a level of calibration, maintenance, and analysis that is difficult (and expensive) for the average person to manage. Still, different citizen science groups have carried out their own projects with low-cost sensors over the years — but mostly as a way of calling attention to pollution in a specific location.

So when I heard about Shusterman, and the BEACON project (which was founded by Ronald Cohen, a professor of Earth & Planetary Science at UC Berkeley), I wanted to learn more. Like Aclima, BEACON uses both low-cost and expensive monitors — particularly to measure CO2. (This is why BEACON also sometimes goes by the visually impressive, but more difficult-to-pronounce name of BEACO2N.)

Unlike Aclima, BEACON makes the data that it gathers public, in the hopes that it will inspire people to get creative. BEACON also encourages fans of the project to host their own sensors. That sounds like a citizen science project — but here the sensors are built and maintained by grad students.

Montclair Elementary’s mascot is the otter. This is not hard to figure out — there are otters everywhere. Inside the administrative offices, the furniture in the waiting area is tiny and child-sized, and the ventilation duct running along the length of the ceiling has been painted so that it looks like a No.2 pencil. Shusterman has a good rapport with the school administration, which is important — you don’t want to alienate someone with a nice roof and a working electrical outlet.

At some locations, like Skyline High, Shusterman will actually make guest appearances at science class and talk about what she’s doing. She’ll explain how, on the roof of the school, there’s a backpack-sized metal box with an air monitor inside that is measuring the amount of C02 in the air. 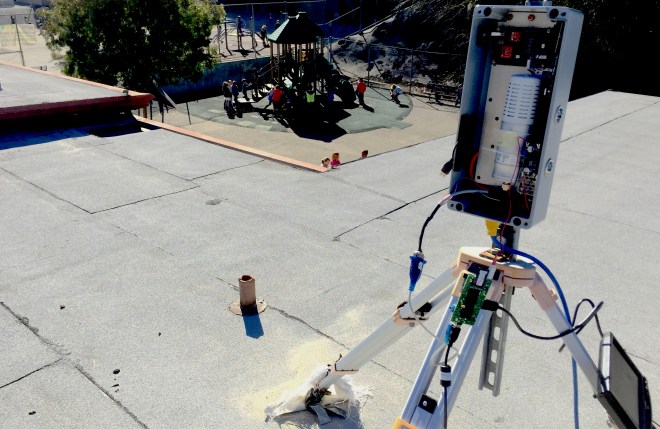 And she’ll talk about how the box is filled with a grab-bag of other sensors: the very cheap but good, like the $20 particulate sensor, which so far correlates with the findings of more proven, more expensive machines; the more expensive and good, like the electrochemical sensors for O3, CO, NO, and NO2; to the very cheap but dubious, like the $8 ozone sensors, which work by registering changes to metal oxide. Ozone changes the resistance of metal to the passage of electrical current; so does heat, water, and just about everything else. But because the devices cost so little and take up no space, BEACON keeps adding them, on the off chance that they might generate some interesting data.

One of Shusterman’s goals today is to scale the top of Montclair’s recently constructed annex to see if that’s a better site. It has a fancy new green roof, and Shusterman is curious about whether the plants might affect the sensors’ readings.

But when we climb up the metal ladder and up through a hatch in the roof, it becomes clear that the best possible spot for a monitor installation is also way too close to the school’s ventilation system. The entire area smells faintly of pizza, and this could be a sign that the air being pumped into and out of the school might skew the data. For example, at one site, particulate matter levels — and only particulate matter levels — drop dramatically right after midnight. The school’s maintenance staff insist that the school’s boiler room is on all the time, but Shusterman suspects something is up — maybe a system rebooting somewhere deep in the HVAC system.

So we abandon the roof, climb back down the ladder, go back through the hallways — past their rows of tiny backpacks hanging on wall pegs — and climb up another maintenance ladder back to the roof of the original building, where the sensor is now. Shusterman pulls the keyboard and monitor out of her backpack, and plugs them into the box — there’s an Arduino/Raspberry Pi setup inside that has turned the box, more or less, into a very simple computer. 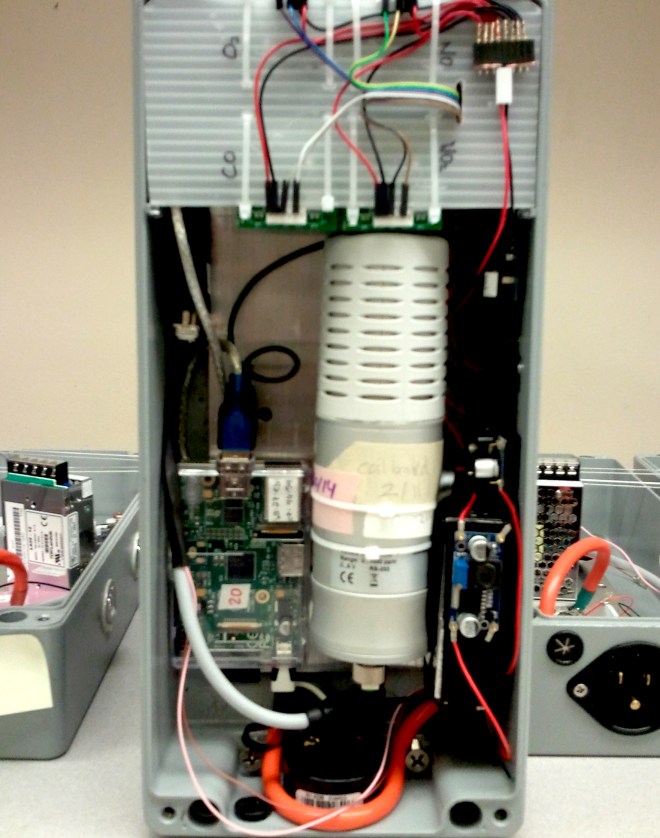 The BEACON project is still in the early stage, but it has seen a few signs that it’s on the right track. For instance, the BEACON team can look at the data and see when school is and isn’t in session — emissions around the building drop dramatically when there are no parents driving their kids to and from school. But the sensors also have been picking up other things — like when the Bay Bridge was closed to traffic because of bridge construction.

She checks on the screen to see if the box has been gathering data — it has — and then downloads the contents onto a hard drive. A few of BEACON’s sites — Chabot Science Center, Port of Oakland Headquarters, Lawrence Berkeley National Labs, Stone Edge Farms, and the Exploratorium — have ethernet cables that go up to the roof, which means that the data can be delivered to the team in real-time. Shusterman has some test parts for a wireless network blinking away in her apartment (the group got T-Mobile to cut them a deal because of the relatively small amount of bandwidth BEACON uses between its 40 SIM cards — they only transmit text, not video or pictures. But for now, the safest way to collect data is by hand. “The hardest part of this project,” says Shusterman, “is making sure that things actually work.”

Most of Shusterman’s friends from her undergrad days are working in San Francisco, at tech companies, eating free lunches and collecting impressive salaries. Shusterman probably could do that too — she talks about messy data with the same enthusiasm that a mountain-climber might talk about a particular attractive peak. But she also has, as she puts it, “a climate change chip on my shoulder.” Both of her parents were chemists, and environmental science was standard dinner-table talk. She was Environmental Enthusiast No. 4 in “Planet Clean and Safe,” a school play about an alternate planet where people actually used energy responsibly, and her teacher insisted that the entire class know how to pronounce the word “chlorofluorocarbon.”

Also, pay gap aside, these are good times to be in environmental science. “It’s an easy type of research to make a case for,” says Shusterman. “It’s not like, ‘If we do this to understand prime numbers now, we’ll have the internet in 60 years.’”

The Obama administration’s strict Clean Power Plan rules are expected to boost both demand and funding for air monitoring. That’s another reason to hope that the plan holds up in court. It won’t just make the air cleaner — it’s making science better in the process.