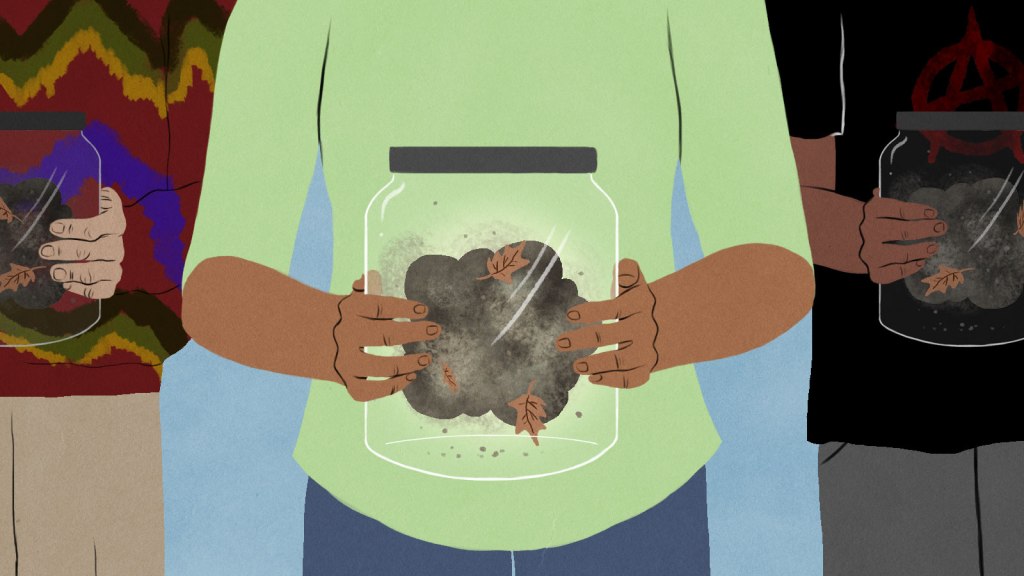 The badges cost $14 apiece. Rebecca Roter walked around the perimeter of the fences surrounding the natural gas compressor facility in her Pennsylvania community, flipping their switches to “on.” The badges had been designed to measure formaldehyde levels in the workplace, so they had a clip at the top that could be attached to a pocket or a shirt collar. The landscape around her offered neither of these, so Roter just clipped them to whatever was nearby: trees, fences. Inside the station, someone — a security guard, maybe? — stood and watched her.

As far as Roter knew, she was gathering the first air quality data that Susquehanna County, Pa., had ever seen. She wasn’t alone. Across the country, everyday people like her have begun stepping into a void created by underfunded or politically compromised environmental monitoring programs — and sometimes, as in Roter’s case, producing data good enough for a scientific journal.

Pennsylvania already had air monitoring stations, but they didn’t monitor much besides ozone, and they were located miles away, in more populated areas. Susquehanna didn’t have enough residents to qualify for their own. “Environmental justice is a very good concept,” Roter said when I interviewed her recently, “but it turns out you need a high population to qualify for justice.”

Roter became interested in air monitoring during a warm summer three years ago, when the air in her neighborhood filled with an incredible stench. “It was like burned rice and plastic,” she said. She followed the stink to a natural gas compressor station in Lathrop, seven miles away. Back in 2008, a group of oil and gas speculators had discovered that Susquehanna County was on top of one of the gassiest parts of the Marcellus Shale play, and Roter began to find her mailbox and doorframe stuffed with notes from people looking to buy oil and gas concessions. At the time, she thought it was a scam.

As drilling and compressor sites multiplied in the area, whatever they were emitting kept getting trapped in an inversion layer over Roter’s neighborhood. She got in touch with the Pennsylvania Department of Environmental Protection (PDEP), but it was not much help. The department was in trouble for withholding water results from people whose wells were being sampled for contamination from oil drilling, and a study released by RAND found that while the state’s average emissions from drilling the Marcellus shale weren’t bad, in counties like Roters, where drilling and prepping natural gas for market were concentrated, emissions of nitrogen oxides were 20 to 40 times higher than the legal limit.

Even if she had somehow been able to persuade the state to put one of its monitors in Susquehanna County, that wouldn’t tell the whole story. Susquehanna is full of rolling hills and valleys that can create inversions, trapping pollution that would normally dissipate. When our air measurement systems were designed, said Michael McCawley, of the department of occupational and environmental health sciences at West Virginia University, they did not have fracking enterprises in mind: “The technologies they were trying to address were steel mills and coal-fired power plants and tall smokestacks that sent emissions high in the air. The pollution was universally dispersed. It didn’t matter where you sampled. Now it takes a little more finesse. And we know a lot more since 1970. We’re not running around in bell bottom pants any more.”

Around the same time that Roter was hanging her badges, a retired cabinetmaker named Frank Finan stood on a patch of ground, holding a bucket. This area usually smelled terrible, and today was no exception, but for scientific purposes, that was the whole point. He took the lid off the bucket and twisted open the intake valve attached to the bag inside, which was made of a heavy-duty laboratory grade plastic named Tedlar, so that it began to fill with the air around him.

Across the U.S. this past summer, dozens of other people like Finan and Roter were doing the same thing. Armed with equipment donated by a nonprofit called Global Community Monitoring, as well as five hours of training and a whole lot of forms, they prowled along the perimeters of production pads, compressor stations, condensate tank farms, gas processing stations, and wastewater holding areas in Arkansas, Colorado, Ohio, Pennsylvania, and Wyoming.

Data collected by volunteers like Roter and Finan usually winds being used as a PR tool or as a lever in backstage negotiations. There usually aren’t enough samples, for one thing. The equipment that Roter and Finan used to gather samples is cheap, but the lab fees to analyze it were still expensive. Lab fees took up most of the budget for the project, period.

Scientific data that is gathered by non-scientists is old hat if you’re an ornithologist — the Christmas Bird Count dates back to 1900. The same is true for astronomy or meteorology — most of the raw data is collected by volunteers. But data on air and water quality are different, because air and water are political. This is why it is unusual — and very scientifically promising — that the research carried out by Roter and Finan and the citizen scientists in Arkansas, Colorado, Ohio, Pennsylvania, and Wyoming, was considered solid enough to get into the Journal of Environmental Health.

“You can certainly say they are activist-type people,” said the lead researcher, David O. Carpenter of the University at Albany in New York. “They were willing to do this work for no salary.” Roter would disagree with the term “activist.” “You can’t choose not to breathe,” she said. “Whether you’re pro-gas or anti-gas — it’s a unifier. One of our goals was to make it acceptable to voice concerns about air quality in the Marcellus because of emissions. And that’s happened … That was not so a year and a half or two years ago.”

In this case, the citizen science approach made a study happen that wouldn’t have otherwise occurred. Truly low-cost environmental sensors are still kind of pie-in-the-sky: Anything that attaches to your iPhone, and anything that promises to monitor your environment continuously, is probably bogus, and anything pitched on Kickstarter probably demands at least some skepticism. Still, technological breakthroughs over the last few decades have made this kind of air-monitoring citizen science more possible for the average person. “When I started gathering data, usually the computer was a mainframe in a building with air conditioning,” said McCawley. “Now it comes on a microchip the size of a dime, and an instrument can do all the internal checks that someone had to do manually.”

But in no small part, citizen science is currently popular in scientific circles because it’s cheap. “It would be better to have professionals doing the sampling,” said Carpenter, of the study, “but that’s just not possible.” When Congress exempted oil and gas from the Clean Air and Clean Water Acts, funding to study the effects of the industry virtually disappeared. The study Roter and Finan participated in cobbled together funding from a variety of small foundations.

“Federal funding agencies are still political agencies,” said Carpenter, and if they compile evidence showing that the oil-and-gas exemption is dangerous, they fear legislators will cut off their funding. Still, he says, “I do think it’s outrageous that studies like this weren’t done the way that we study lead poisoning in children. This should be a large, million-dollar-a-year study funded by the federal government — but the federal government has not funded fracking research until very recently.”

The study found that out of the 75 volatile organic compounds (VOCs) that the lab measured for across sites in five states, eight of them at various times exceeded the minimal risk levels set up by either the Agency for Toxic Substances and Disease Registry or the EPA Integrated Risk Information System standards for cancer risk. Four VOCs — hydrogen sulfide, formaldehyde, n-hexane and benzene — were particularly high, with the Susquehanna site exceeding the safety level for formaldehyde more than half the time.

None of this is illegal, exactly, since the Clean Air Act doesn’t apply to oil and gas drilling. But it does establish some facts about what is happening and provides justification for better monitoring. Which is what Finan and Roter were looking for, anyway.

“I know going through life that the things that I’ve learned that have stuck with me the most were things I figured out myself,” said Finan, when I asked him about why he chooses to spend so much time these days gathering data on the leakage of volatile gases. “I don’t have answers. All I have is questions. I don’t even want to interpret the facts. I just want to make them public.”