Dear Neutrogena: You can't wipe away a drought 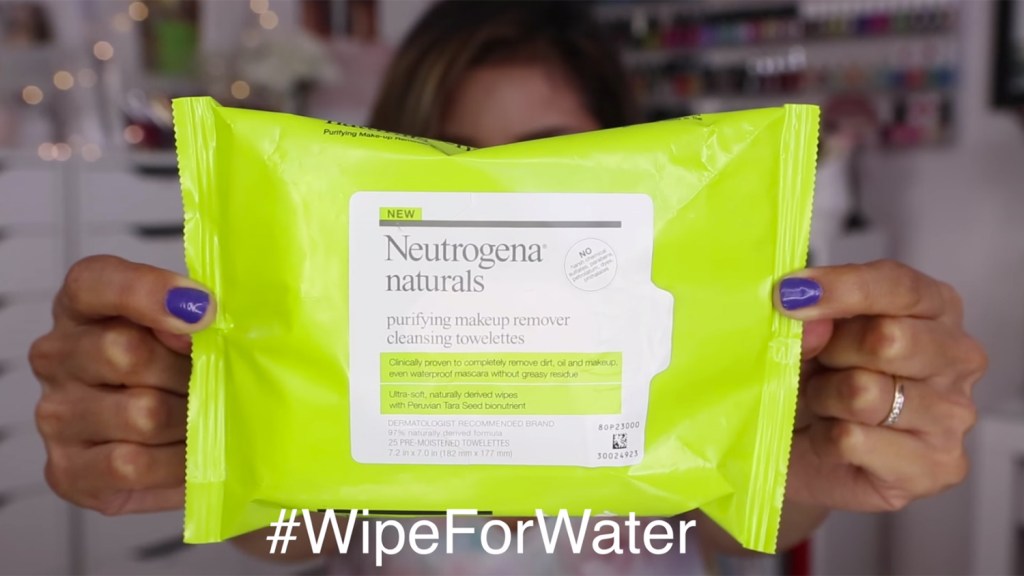 Dear Neutrogena: You can’t wipe away a drought

We know, we know: California is in a severe drought. Consumers here are constantly reminded that every single drop counts — and if ad campaigns don’t reach you, your drought-shaming neighbors probably will.

In the middle of all of this, one company has found a solution in need of a problem: Neutrogena is claiming that we spend up to a whopping five gallons of water each time we wash our faces, and that a disposable wipe will end that waste. All we have to do is buy its product.

Neutrogena calls it the #WipeForWater campaign and donates in its name to The Nature Conservancy. #WipeForWater encourages face washers to ditch the faucet and use Neutrogena’s cleansing wipes instead, which are 86 percent “naturally derived.” The Neutrogena Naturals brand, which sponsors the campaign, settled a nearly $2 million class action in 2013, after admitting that — despite its name — its products contained petrochemicals and other not-so-natural elements.

While the main #WipeForWater page features a video with Kristen Bell, I first came across it through a video with Dulce Candy, a well-known Latina beauty expert:

Dulce Candy appears earnest in her motivation for using the wipes; the result is part beauty review, part well-intentioned water conservation effort. Just like the campaign itself, the video targets women; I’m not sure what you men are doing, but washing your faces is apparently not part of your daily routine.

The #WipeForWater site encourages users to pledge to using the wipes one day at a time for up to one week, and claims that each pledge saves up to 35 gallons of water per week. According to the site, pledges have resulted in nearly 150,000 gallons of saved water since the campaign (which Neutrogena sometimes calls a “movement”) first launched in April. For each #WipeForWater pledge — which must also be shared on Twitter or Facebook, thus creating a plethora of free advertising for the campaign — Neutrogena also donates $1 to The Nature Conservancy.

The Nature Conservancy’s Geraldine Henrich-Koenis said via email that the organization first teamed up with Neutrogena in 2012 to work on water user awareness, and has received $50,000 in connection to the #WipeForWater campaign. Overall, The Nature Conservancy has received more than $300,000 in the last three years from Neutrogena; the organization is known for its corporate-friendly environmental strategy.

In order for the #WipeForWater campaign to make sense, one has to believe that we waste a lot of water washing our faces. In a state like California — or in any state, really — how many people actually use five gallons to wash their face? “To get the five gallons of water, you’d need to be running the faucet the entire time,” says Caitrin Chappelle of the Public Policy Institute of California — something drought-educated residents are decreasingly likely to do.

Promoting water conservation is obviously important, and individual water consumption is part of that — but it’s a small fraction of the water that California uses. Agriculture, for example, uses up to 80 percent of the state’s water for produce that’s consumed both in and out of California. And, when it comes to individual use, outdoor water use for things like landscaping takes up as much water as indoor use. That’s why people have been changing their approaches to outdoor lawns and gardens, sometimes switching over to drought-resistant plants or even eliminating their lawns altogether.

Still, the drought creates a different market in which to peddle a product. But do face wipes actually save water or simply create additional waste with traces of chemicals? Neutrogena declined the opportunity to talk about its wipe campaign. There’s no data on what kind of waste the production, use, and disposal of these wipes create. And it proved impossible to find an expert who would weigh in on the matter.

Neutrogena has built a solid campaign that paints a green veneer on the tragedy of the California drought — and it has raised a good amount of money for The Nature Conservancy doing so. While the campaign may raise individual awareness about water conservation, it fails to give even lip service to deeper problems that have made this drought so extreme. While social media campaigns can certainly help educate people, we’re not going to hashtag ourselves out of a drought by focusing on individual faucet use.