What do almonds, golf, fracking, and Kim Kardashian’s lawn have in common? They’ve all been publicly shamed for their outsized water use during California’s ongoing drought.

But you likely haven’t heard as much about one of the state’s major water sucks: oil refineries, which are estimated to be the second biggest water user of non-ag businesses in the state (after golf).

The plants process more than 80 million gallons of oil per day, turning it into products like gasoline, diesel, and jet fuel. According to the Environmental Protection Agency, each gallon of oil takes between 1 and 2.5 gallons of water to refine, most of which is either dumped into the ocean after it’s used and treated or evaporated as steam. Once in the ocean, the water is unusable unless it’s desalinated.

Because California mandates a specific standard of fuel, most of the output produced by refineries stays in the state, powering the state’s 26 million cars and 1 million trucks. Even though California is the third largest refiner in the nation — after Texas and North Dakota — the Golden State doesn’t collect data on the water consumption of its refineries. So I reached out to the six companies that make up over 90 percent of the state’s refining capacity, asking how much water each California refinery consumes.

Three companies were forthcoming about their water use; ExxonMobil, Phillips 66, and Valero declined to comment. Let’s assume that these three companies use 1.5 gallons of water per gallon of oil refined — an estimate provided by David Kujawski, at the consulting group Refinery Wastewater Associates, and one that matches up with water use of other refineries in the area. That means that at full capacity, the six companies together use about 94 million gallons of water per day in California — more than twice as much as the daily water use of San Francisco homes, or about a third of that of Los Angeles homes. When you’re looking at the chart below, keep in mind that companies often sell products to gas stations with different brands; gasoline that’s refined at the Tesoro plant, for example, is often sold at Exxon, Shell, and ARCO stations. 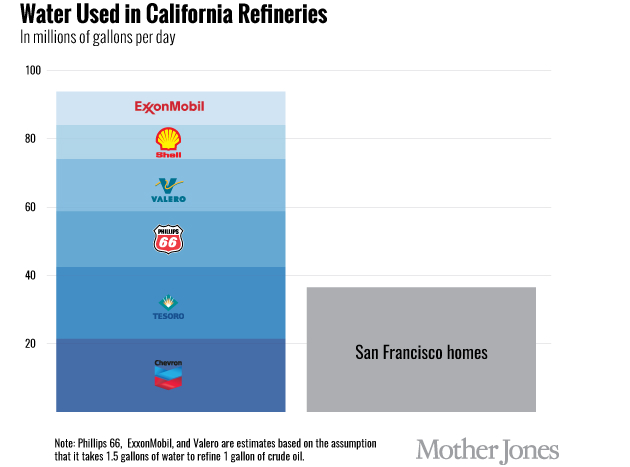 So far, the refineries have largely avoided the water cuts that other industries are facing. Though California Gov. Jerry Brown recently mandated homes and non-agricultural businesses to reduce water use by 25 percent, many oil refineries won’t be subject to the reductions because they have their own wells and use the water indoors. (According to George Kostyrko, spokesperson for the state’s Water Board, the cuts apply to outdoor irrigation for those with their own wells; policy “doesn’t dictate terms for industrial or commercial operations inside the buildings.”)

I won’t go into the details of the refining process (if you’re interested, you can find good information here) but in short, refineries are responsible for taking crude oil — most of which is imported to California from Alaska, Saudi Arabia, Ecuador, and Iraq — and turning it into fuel and other petroleum-based products. (Note that refining is different — and more water intensive — than oil extraction, which includes fracking.) The water that the refineries use varies in purity: Some refineries use mostly freshwater, others run mostly on treated wastewater (the kind of water that would normally be used for irrigation or street cleaning).

Once at the refineries, the bulk of the water is used for heating up the oil and cooling down equipment. Though technology exists for zero-discharge refineries, there are no such refineries in the United States, since water has traditionally been such a low-cost resource.

When refineries are done with the water, some of it is evaporated as steam, but most of it is treated and discharged into local bodies of water — in the case of California, where refineries cluster around San Francisco and Los Angeles, that means the water is dumped into the ocean. Environmental activists also worry about contamination of the ocean and ground with chemicals and heavy metals, including ammonia and selenium.

Kujawski, who worked as an environmental engineer at several refineries in California before becoming a consultant, doesn’t think the water intensity of the industry is going to change without tougher policies that affect the bottom line. “There’s plenty of technology out there” to decrease water use, he says. But “environmentally, they’re going to only do what they’re forced to do.”