It’s a warm Monday afternoon at Seattle’s South Transfer Station – a newly renovated, LEED-Gold certified dump. The self-haul sorting signs are clear, the waste piles are neatly organized, and the place is, quite frankly, gleaming.

But for operations manager Suzanne Hildreth, things are looking a little bit too clean. She glances through a tall window in her office that presides over the garbage mounds below, pursing her lips. “On typical Mondays, we see 1,100 tons of trash,” she says. “Hmmm.” She perches at her computer, pulls up a spreadsheet, and notes that only about 450 have been logged so far.

That could be construed as good news, since Seattle aims to slash its waste stream dramatically over the next few years.

“Well, look at that,” she jokes. “We cut it in half, just today!” Then, with a laugh, she shakes her head. “No no, there’s definitely something wrong. If it’s not here yet, that’s because it’s on its way.”

Sad fact: If you work at the dump, there’s one thing you know for sure, and it’s that the trash just keeps on coming.

And that sad fact matters – to both Seattle and the planet. Cities across the globe are scrambling to stem the trash tide that flows inexorably to landfills (and then to oceans), and not just because it’s tough to find a place to put it. Landfills belch out a huge amount of planet-warming methane, a greenhouse gas with 25 times the climate impact of carbon dioxide. They’re the globe’s third-largest anthropogenic source of methane emissions, and the U.S. contributes way more to that number than any other country in the world.

In Seattle, waste reduction is the third prong of the city’s three-pronged attack on greenhouse gas emissions, per its ambitious Climate Action Plan. That’s partly a nod to landfill-caused methane, partly to the emissions generated in the whole trash-collection process, and, perhaps most of all, to the emissions associated with using virgin resources to manufacture products that we use only once and throw away.

Tim Croll, solid waste director for Seattle Public Utilities, says the city’s Zero Waste strategy is what motivates his team. “What’s our goal for waste?” he asks, rhetorically. “Less. And next year? Less.”

So far, so good, then: At last count, just over 56 percent of Seattle’s overall waste stream gets recycled or composted. (Nationally, that number is 34.5 percent.) The city is gunning for 60 percent by the end of the year, and 70 by 2022.

In the meantime, six days a week, 52 weeks a year, roughly 1,000 tons of garbage get trucked to the South Transfer Station and shoveled into a giant hole in the middle of a concrete floor. With a thunderous screech, two oblong tubes of metal squash the stuff into dense bricks that are loaded into shipping containers, stacked at the nearby railyard, and shipped 600 miles south to a landfill in east Oregon. That’s right: 1,000 tons, six days a week, all year long – at least – for a grand total of more than 300,000 tons of garbage each year.

Compared to other American cities of Seattle’s size, that ain’t half bad. But even if Seattle were to hit its 60 percent waste-diversion goal this year, it’d still remain leagues behind its overachieving peers. San Francisco, for instance, leads the country with a whopping 80 percent waste diversion rate; Los Angeles has hit 76.4 percent; and Portland was already at 70 percent in 2012. 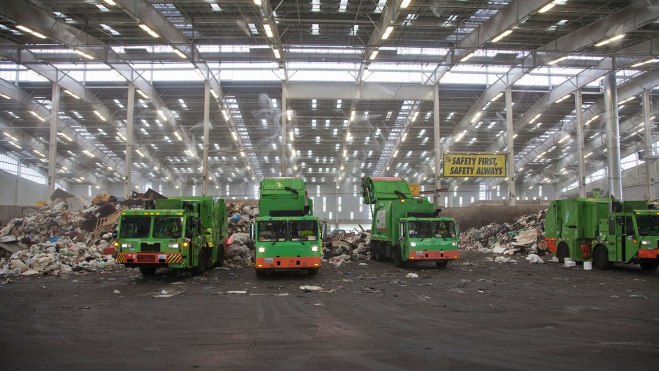 There are major differences in how such rates get counted (San Francisco takes credit for things it shouldn’t, some argue). There are also wildly divergent state recycling laws, which helps explain why all of the top U.S. cities are in California: The Golden State passed a law back in 1989 requiring cities and counties to cut their landfill streams in half; in 2011, the state upped the ante to 75 percent by 2020.

Still, given Seattle’s climate plans, progressive politics, and REI-gear-sporting residents, you’d think it’d be doing a better job. The city’s landfill tonnage does keep going down, despite the city’s booming population, which is remarkable. But over the past few years, it’s been gradually stalling out.

Croll claims the asymptotic effect is just because every new program (banning yard waste from the trash back in 1988, say, or recyclables in 2005) has diminishing returns after a while.

But Seattle has shied away from some simple solutions that have proven wildly successful in other cities. Portland saw a huge leap in its waste diversion rates, for instance, when it made one key change in 2011: shifting curbside pickups so that recycling and compost bins get collected every week, while landfill-bound trash only gets picked up every other week. Stumptown’s residential garbage numbers dropped by a colossal 38 percent in the first year.

When Seattle Public Utilities floated the same idea, residents weren’t buying it. In 2012, SPU launched a pilot program called the One Less Truck Project. For six months, collectors picked up trash just twice a month from about 800 single-family households in four different neighborhoods. In a survey afterward, 63 percent of participants said they were OK with the idea, but the reception in two of the four neighborhoods was chillier, with an approval rate of just 52 percent.

Some participants complained that it was just gross; no one wants trash festering on their property for two weeks (or a whole month, if, heaven forbid, you forgot to put your trash out). But mostly, it came down to money: Seattle residents were not satisfied with the idea that they’d pay roughly the same amount for curbside collection and get less trash collected.

“Overall, the feeling was that it was a reduction in service,” explains Suzanne Hildreth. The project was shelved.

The idea is not completely off the table, but in the short term, it’s not a change Seattle is likely to make. Hans VanDusen, the utilities’ solid waste contracts manager, says that if they propose the idea again in 2019, it’s possible they could offer residents bigger savings, since that’s when city contracts with waste collectors are up for negotiation.

But 2019 is a long way away in climate-goal years. It takes a heck of a lot to shift a waste-diversion rate 10 percentage points. Hence Seattle’s much-lauded new rule: food scraps are now officially verboten in the trash.

Although Seattle has had a curbside compost collection program since 2005, the city estimates that 100,000 tons of what goes the landfill every year is still compostable. So, on Jan. 1, 2015, enforcers began sticking red warning tags on food-filled trash bags, warning that perpetrators would be hit with small fines beginning July 1. Jerks like me joked that Seattle was using a “scarlet letter” to publicly “shame” residents into composting. (They’re actually “hot pink,” says Croll.)

Whatever their color, the tags seem to be working: By April, Seattle had already collected an additional 19,000 tons of compost, half its goal for the year. On Earth Day, Mayor Ed Murray held a small press conference during which he announced, with a good bit of gravitas, “I am suspending today all fines for the rest of 2015.”

Next up: kitty litter (if you extract food and recyclables, says Croll, “almost a quarter of what’s left in the waste stream is pet waste and diapers”), cooking oil, mattresses, carpets, and construction debris. (That last one’s a particularly big deal for a city that’s in the midst of a major building boom.)

Seattle, like many cities, has a long, long way to go if it wants to put its waste-reduction money where its climate plan’s mouth is. Just ask people like Suzanne Hildreth, facing off with the trash mountains, day in and day out. But Tim Croll is candid about how big of a role city operations can play in this stuff. Carpets, diapers, drywall – “If you collect it,” he says, “they will come.”

And if you don’t? Look at Portland. Maybe they won’t.