We’ve noted before the many ways in which solar power is blowing up in the United States: Adding tons of jobs, driving progressive policies, and attracting millions of dollars in investment from major corporations. It’s not slowing down anytime soon: New data from market analysis firm GTM Research finds that 2014 was solar’s biggest year ever, with 30 percent more photovoltaic installations installed than in 2013. Check it out: 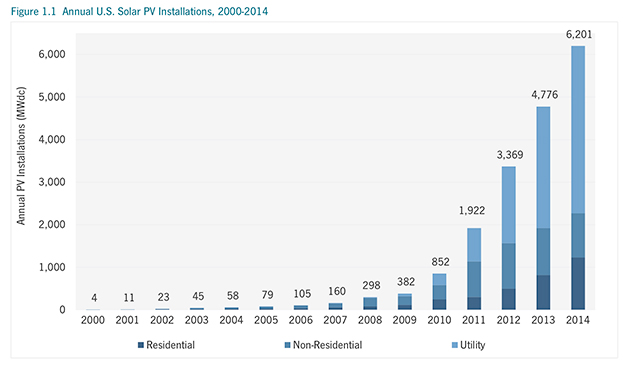 Those numbers are even more impressive when you compare them to other types of energy sources. Even though solar still accounts for a small share of U.S. electricity generation (less than 1 percent), last year it added nearly as many new megawatts to the grid as natural gas, which is quickly catching up on coal as the country’s primary energy source. (Coal, you can see, added almost nothing new in 2014.) 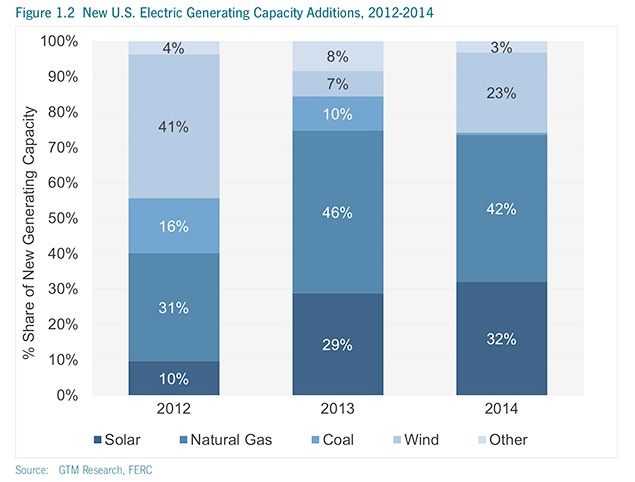 The report points to three chief reasons for the boom. First, costs are falling, not just for the panels themselves but for ancillary expenses like installation and financing, such that overall prices fell by 10 percent compared to 2013. Second, falling costs have allowed both large utility companies and small third-party solar installers to pursue new ways to bring solar to customers, including leasing panels and improved on-site energy storage. Third, federal incentives and regulations have been relatively stable in the last few years, while state incentives are generally improving, particularly in states like California and Nevada that have been leading the charge.

One more chart worth pointing out: Rooftop solar tends to get the most press because that’s where homeowners and solar companies get into tussles with big incumbent power companies and the state regulators that often side with them. And it’s true that a new home gets solar more often than a giant solar farm gets constructed. But on a sheer megawatt basis, utility-scale solar is still far and away the leading source, with a few notable projects coming online in 2014, like the Topaz Solar project in the California desert, the largest solar installation in the world. 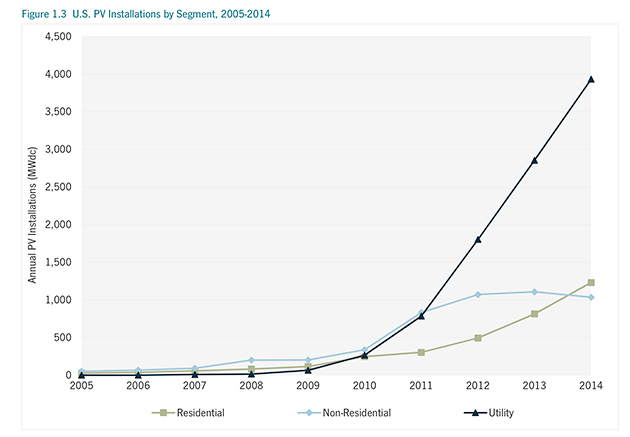