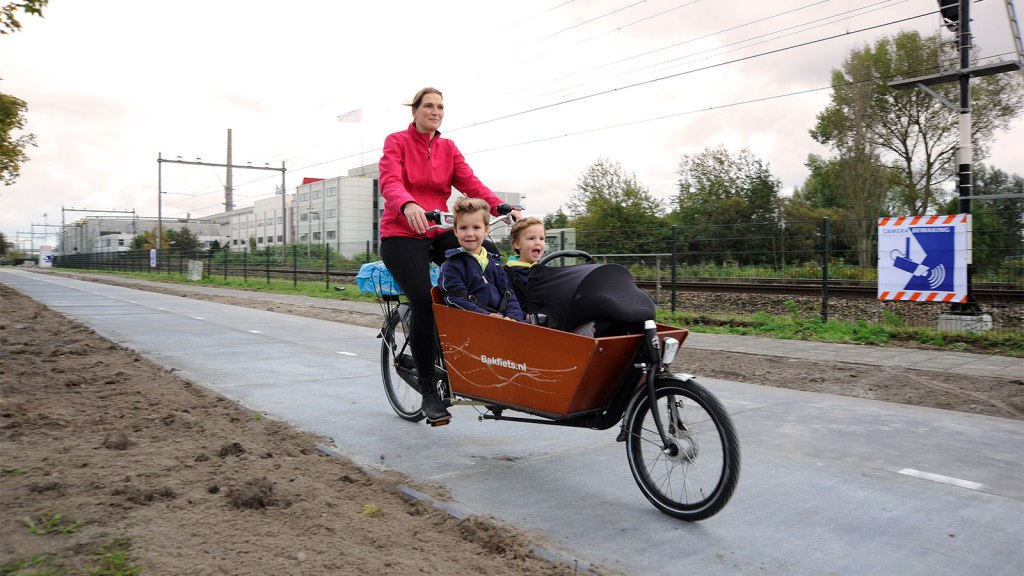 As if the Netherlands wasn’t cool enough already, the Dutch had to go and build a cycling lane made entirely out of solar cells. That’s right, a path for car-free transportation that will eventually generate enough energy to power three households.

So — not that we’re jealous or anything — now might be a good time to mention that, even though the Netherlands beat us to implementation, there IS actually a solar roadways initiative in the U.S. Two engineers in Idaho designed a solar street system that would make future roads look like a scene from Tron, according to this viral video:

Thanks to a successful Indiegogo campaign, solar roadways should begin to pop up in spring of 2015. Yahoo! Of course, a vital difference is that here, cars are still going to be spouting carbon on the U.S. solar roadways. (We’re happy for you, Netherlands, we really are. It’s just … WHY DO YOU ALWAYS MAKE US LOOK LIKE CHUMPS?)

Ahem. The bike path, developed by a Dutch solar company called SolaRoad, has been in the works since 2009 and will officially open on Nov. 12. The path extends 262 feet, but will likely expand more than 30 feet early next year. The path connects two Amsterdam suburbs, Krommenie and Wormerveer, and is used by an average of 2,000 commuters every day. Here’s more from an article in The Guardian:

Costing around €3m (£2.4m) and funded mostly by the local authority, the road is made up of rows of crystalline silicon solar cells, encased within concrete and covered with a translucent layer of tempered glass.

A non-adhesive finish and a slight tilt are meant to help the rain wash off dirt and thus keep the surface clean, guaranteeing maximum exposure to sunlight.

The design was made possible by the Netherlands’ Organization for Applied Scientific Research, and they’re already looking toward potential expansion within the country. More from The Guardian:

Sten de Wit of the institute told the Guardian that up to 20 percent of the Netherlands’ 140,000 kilometers of road could potentially be adapted, helping to power anything from traffic lights to electric cars. Tests have seen the solar panel units successfully carry the weight of heavy vehicles such as tractors.

Sheesh. Is there anything that solar panels can’t do? It all seems so brilliant, so hopeful, so promising. And in the Netherlands, it’s actually a reality! Ah well, doesn’t it make you glad to know that we have so many U.S. politicians on solar’s side?