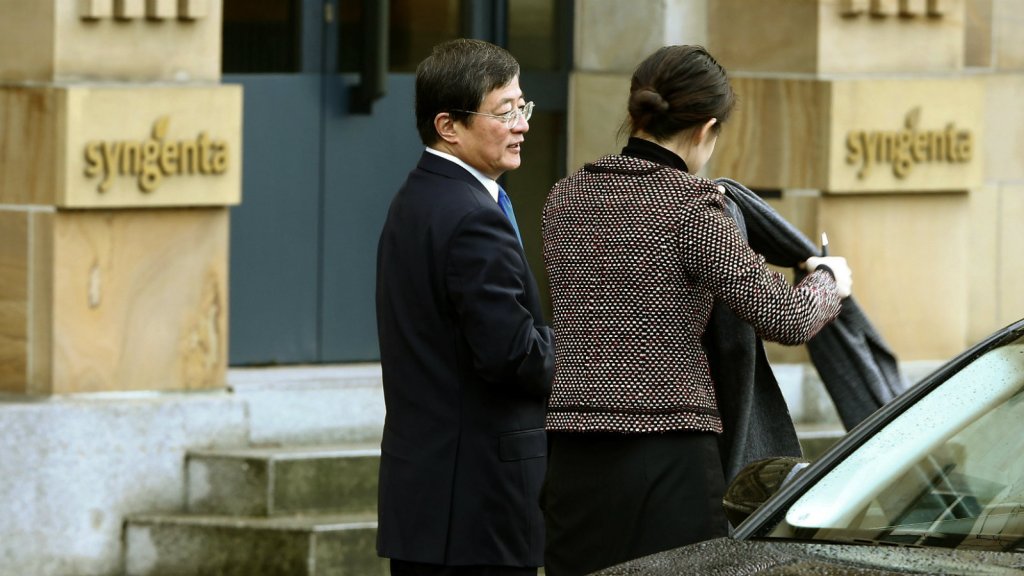 When I think about what’s happening with the world’s largest seed suppliers right now, I imagine six lonely souls making eyes at each other in a dim Midwestern dive. There’s not much time before last call, and no one wants to go out into the cold alone.

They call the giants of agribusinesses the Big Six: Bayer, BASF, Dow, DuPont, Monsanto, and Syngenta. Together, they account for a little more than half the sales of seeds, pesticides, and fertilizers around the world, and they’ve been working Tinder pretty hard. This week, Monsanto rejected a $55 billion bid from Bayer.

Monsanto had previously made a pass at the Swiss company Syngenta, and when that fell flat, Syngenta paired up with an agribusiness from out of town, ChemChina. While Monsanto was trying to drown the sting of rejection, Bayer wrapped a beefy German arm around its shoulders. Meanwhile, Dow and DuPont were canoodling in the corner. And Monsanto recently bought a drink for BASF, another German firm.

Why are all these companies attracted to each other all of a sudden? And if the Big Six turn into the Big Three, what would that mean for farmers and the environment?

To find out what’s going on, I called Bill Buckner, who ran Bayer’s North American operations from 2005 to 2011, and is now the head of the Samuel Roberts Foundation, which does farm research.

Buckner explained that farm supply companies usually head to the singles bar whenever times get hard. Farm prices rise and fall, and when they fall — as they’ve been doing the last few years — investors in the Big Six get nervous. If farmers aren’t making enough money, they may not buy expensive seeds from these companies. When investors start to worry that companies have maxed out farmers’ ability to buy new things, they begin pushing for mergers. If a company can’t make more money selling new things, the logic goes, it should merge with a rival and eliminate similar jobs and projects. So when prices fall, companies begin looking around for partners. Or perhaps a different metaphor is more appropriate here: Eat or be eaten.

What are the consequences?

The danger is that all these mergers will lead to monopoly and monoculture. In a 2014 summit, seed breeders convened by the Rural Advancement Foundation International, found that consolidation of agribusiness had decreased commercial crop diversity and the selection of seeds a farmer can choose from. That lack of diversity makes us all more vulnerable to climate change, and disease outbreaks.

“Fear of monopolization is appropriate in this situation,” said GianCarlo Moschini, an economist at Iowa State University. If there’s not enough competition, there’s little incentive for companies to develop new seeds and pesticides. But, he said, if we keep companies too small, they won’t have the resources to develop those products. Companies have to be big to pour money into a project for years before it becomes profitable. If the government broke up Monsanto into five smaller companies, those baby Monsantos would almost certainly fail, he said. So it’s a balancing act: Competition suffers if firms are too big, innovation suffers if they are too small.

The current wave of consolidation may be a threat to conventional farmers, but Buckner said it could help the new wave of alternative agriculturalists. If the biggest companies become more tightly focused on just a few crops, it will open up room for second-tier and third-tier companies to develop products for this new breed of farmers. “I think this is going to create new markets and opportunities,” he said.

There’s no guarantee that any of these deals will go through. Regulators are examining them all, and the biggest merger, the deal between Monsanto and Bayer, is under special scrutiny from the European Union’s antitrust agency. Whatever happens, we’ll probably never go back to the days when there were thousands of mom and pop companies developing new seeds and farm supplies.

“It’s larger than this specific industry,” Moschini said. “Consolidation is a fact of life in many businesses.” Thanks to globalization, and the ease of long-distance communication, it’s become easier for businesses to find partners and merge.

It’s the job of anti-trust regulators to make sure companies aren’t using their size to drive up prices. But we don’t have regulators to insure that we have sufficient diversity in crops and farming techniques. If we want that diversity, we can’t just leave it to corporations to do all the R&D. Government needs to support basic research.