As scientists model dire predictions of environmental disasters from human-caused climate change, and global political instability in our nuclear-tipped world revives the possibility of that Armageddon, the fantasy that we might someday be able to flee the wreckage and sustain ourselves on some ersatz Earth is increasingly appealing.

Unfortunately, attempts to create a suitable substitute habitat have not yet succeeded. As far as anyone knows now, Earth, abused and getting more damaged thanks to our unsustainable habits, really is all we got.

The urgency and poignancy of this fact was the subject of dozens of talks last month at an environmental summit for young leaders sponsored by One Young World, at the Biosphere 2 outside Tucson. Speakers from academia, business, global diplomacy, and politics came together to discuss climate change tipping points, the fragility of our planet, and the need for sustainable alternatives for food, energy, and other human needs. (I participated as the moderator of a panel discussion on the lack of political action on climate change.)

Among the speakers were an astronaut and two Biosphereans, who described their different experiences living in “closed life support systems.” Such systems fascinate me not only as doomsday escape hatches, but because enclosed spaces with no fresh air freak me out. If someone wanted to get me to confess all, the mere suggestion of an extended period of time in a little unventilated capsule would break me faster than waterboarding. Needless to say, that tic makes me a bad candidate for any experiments like the one that commenced at the Biosphere venue 25 years ago this year, or the space station. 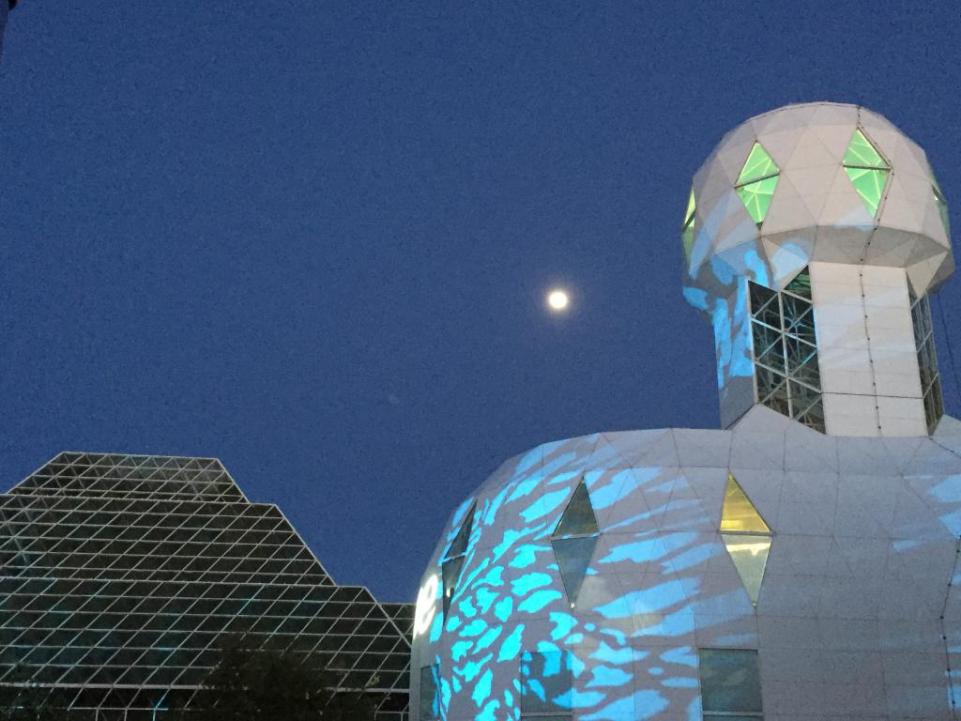 The Biosphere 2 outside of Tucson was an attempt to build a self-sustaining, earth-like environment.Nina Burleigh

The conference included tours of the Biosphere, where a towering bamboo forest still flanks the Olympic swimming pool-sized “ocean” and where ants and roaches still crawl among the cacti in the faux desert — all under glass. I made it through the tour, but even with doors open to the desert outside, the closed atmosphere is oppressive.

In 1991, eight people — four men and four women, dressed in Star Trek-like navy jumpsuits — locked themselves inside the 3-acre, glass human terrarium in the Arizona desert for two years.

Biosphere 2 (the number 2 is there because Earth is Biosphere 1) was the $150 million dream solution to a Texas millionaire’s apocalyptic fears. It contained an ersatz mini-rainforest, savanna, and “ocean” to simulate the Earth’s own interconnected environments, and the goal was to see if the plants and water and humans and soil and insects and animals inside could form a self-sustaining, oxygen-producing, food-growing, earth-like environment within sealed geodesic domes of glass, steel, and plastic.

Our understanding of how all of nature is interconnected dates back to the 18th century naturalist Alexander von Humboldt, who traversed the globe and first identified the vast ecological chain reactions that seem to link all life. “Everything is interaction and reciprocal,” he wrote then. At the time it was a revolutionary theory, because until then philosophy and religion had proposed that nature existed for human use and domination, rather than for itself.

It turned out that a large chunk of Texas oil fortune and some pretty smart people in the late 20th century couldn’t simulate those complex interactions that keep our natural atmosphere habitable. No sooner had the metal doors sealed them in than the Biosphereans’ instruments indicated the system was leaking oxygen. They carried on as best they could, farming sweet potatoes and beans for survival beside the ersatz ocean, in the “wind” created by a complex basement bellows system, but by the 18th month, they were physically suffering for lack of air. The experiment continued for the full two years, but for scientific purposes it ended when oxygen had to be pumped in to keep the Biosphereans alive.

The human experiment has never been recreated but the University of Arizona is transforming part of the site into a “Land Evolution Observatory” — a 10-year, $5 million project to study how vegetation, topography, and other factors affect the movement of rainwater through watershed to drinking water. 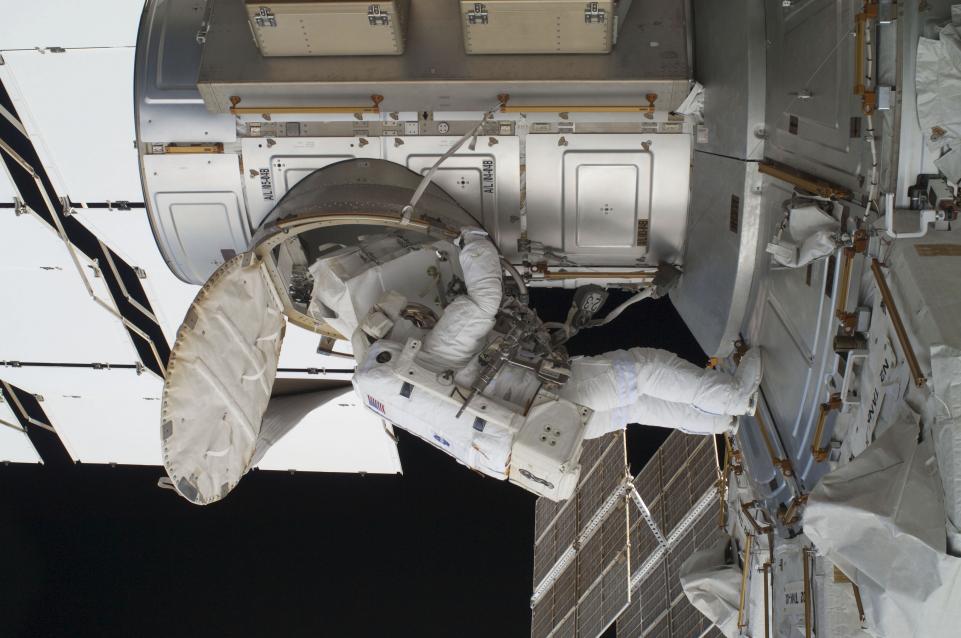 NASA astronaut Ron Garan egresses the International Space Station’s Quest airlock at the beginning of the last spacewalk conducted while a space shuttle is docked to the station in this photo provided by NASA and taken July 12, 2011.
NASA / Reuters

Two of the Biosphereans — Jane Poynter and Taber McCallum — spoke to an audience of about 400 young leaders at the conference. The couple — who married after their “mission” ended — reminisced about daily measuring the components of their atmosphere, tracking the levels of carbon and oxygen in their tiny world. “One of the amazing things about the biosphere is that we knew how much carbon and oxygen was in the atmosphere,” McCallum said.

Today, of course, scientists are doing exactly that with Earth’s atmosphere and finding carbon has surpassed 400 parts per million — a level not seen since the Pliocene era, beginning around 5 million years ago, when the planet had an ice-free Arctic.

“One of the most intriguing personal experiences Taber and I had is that of being viscerally part of our biosphere, really being interconnected,” Poynter said. “Moment by moment, we knew we were dependent on all the plants in this sealed container to survive and that the CO2 that we exhaled was going into all the plants and animals.”

After the Biosphereans told their terrestrial tale, an extraterrestrial took the podium: Astronaut Ron Garan spent six months in the International Space Station in 2011, orbiting Earth at a speed of 17,000 miles an hour, viewing a planetary sunset and sunrise every 45 minutes. Like many astronauts, Garan returned to earth profoundly affected by having seen the planet — our “pale blue dot” — from the dead void of space. He now devotes part of his time to speaking about increased environmental awareness and collaboration.

Spending six months in the tiny closed life support system of the ISS, drinking water made from recycled urine, and conducting experiments with two Russian cosmonauts, Garan said he gained a new perspective on the potential and need for human collaboration on Earth.

At bedtime, before he closed his eyes, he would “say goodnight” to the distant planet out his window.

“I would look back at the Earth and wonder what it is going to look like in 50 or 100 years, and I was routinely hit in the gut with the sobering contradiction between the beauty of our planet and the suffering of so many of its inhabitants. All those woes have a cause-and-effect relationship with our environment. I spent a good deal of time Earth-gazing. I realized every one of us is riding through space on this spaceship together.”

After six months, Garan and his crew-mates plunged back through the fiery atmosphere and landed somewhere in the steppe, where Garan was eye-level with the Earth for the first time in six months. “Out of my window, I saw a rock, a flower, and a blade of grass,” he recalled. “I said, I am home. What was amazing was that I was in Kazakhstan, even though I lived in Texas. Our definition of home has profound implications. We do not have a closed life support system on Earth. What that means is, in our current trajectory, we will run out of resources to sustain life on earth. We have to figure this out.”

Obama and India’s Prime Minister are meeting this week, but there’s a toxic elephant in the room