We’ve come to think of the tech world’s heroes as well-educated, creative people who dream of saving our world with their ideas. In the popular imagination, their stories follow a similar path, one that involves dropping out of Harvard or Stanford to create the next big thing.

Ruben Garcia’s story is nothing like that. Born in Mexico, he grew up as an undocumented farmworker, picking onions when he was just 5 years old, and never attended college. But Garcia’s remarkable innovations are helping to clean up the shipping industry.

“We can make a huge difference,” Garcia says of his company, Advanced Environmental Group, based in Long Beach, Calif. “And we want to make a difference.”

Massive container vessels, like the ones that sail to the Port of Long Beach, are among the planet’s super polluters. One estimate said particulate matter from their exhaust caused 87,000 deaths from cardiopulmonary disease and lung cancer in 2012. The Guardian estimated that the world’s 15 biggest ships belch as many emissions as all of the cars on the planet. 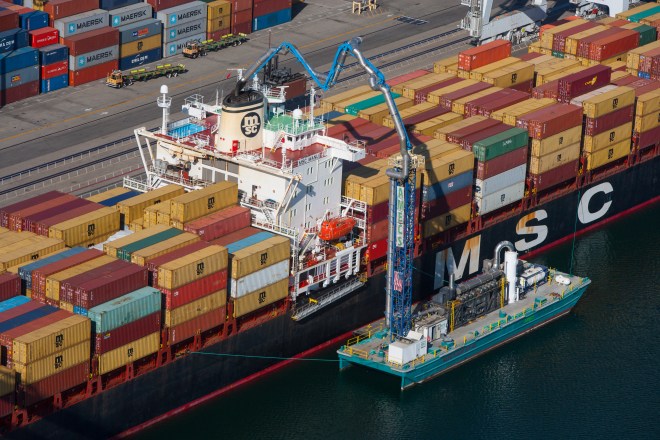 The AMECS connects to an ocean vessel at the Port of Long Beach.Advanced Environmental Group

At sea, their engines run on bunker fuel, the leftover muck at the bottom of an oil barrel. Once ships get 200 feet from a U.S. port, they switch to cleaner diesel, but they’re still polluting. Even at rest, a ship still emits as much diesel exhaust as roughly 12,500 cars. Here’s where Garcia’s company steps in, capturing most of the ship’s exhaust while it sits in port.

Crowded onto a small barge on the Port of Long Beach, Garcia’s crew hooks up a gigantic hose to a ship’s exhaust. “It’s basically a big scrubber,” Garcia says. His engineers always frown at that description, arguing that the technology is much more complicated than that. The integrated emissions-control process, which Garcia has patented, sucks more than 90 percent of the particulate matter, nitrogen oxides, and sulfur oxides out of the ship’s diesel engine.

The Port of Long Beach, one of the busiest in the world, has a green port policy. One of the ways the port hits its benchmarks is by reducing emissions from ships at dock by having them switch off their engines and plug into onshore electrical power. It’s part of a California state law that kicked in two years ago, requiring fleets to cut 80 percent off their 2013 emissions by 2020.

The thinking behind this gradual approach is that a lot of ships can’t simply switch to electrical power immediately; it can take more than $2 million to retrofit a single ship just so it can plug into onshore power.

Garcia’s technology, called the Advanced Maritime Emission Control System, or AMECS, skips what’s known as “shore-side power” altogether. It takes the ship’s regular emissions and makes them nearly disappear. The AMECS idea was impressive enough that the Port of Long Beach put up a $2 million grant to help make Garcia’s first barge a reality. After more than 1,000 hours of rigorous testing, the California Air Resources Board approved the technology as an alternative to shore-side power last fall. There’s one of his barges working the entire port for now, and two more are on their way. Garcia hopes to have about 20 barges eventually. But getting there requires persuading shipping companies that his technology can handle the workload. People in the shipping industry — including regulators — still have their doubts that Garcia’s green tech can scrub emissions from ever-larger ships. “Their first reaction is, ‘if you’re not Elon Musk, we don’t know about you, we don’t know if [your technology] works,’” he says.

The biggest ship to visit the Port of Long Beach is the Benjamin Franklin, owned by CMA CGM, a French company. With the capacity to hold 18,000 shipping containers, the Benjamin Franklin is five times the size of the Titanic. When I saw it docked last month, it looked like a skyscraper city. Cranes moved containers around with Tetris-like precision to get the boxes off the ship, running four days straight to empty the Benjamin Franklin. The massive ship hadn’t been retrofitted to use shore power, so Garcia offered to connect his barge free of charge. He’d only hooked up much smaller ships in the past, so connecting to the Benjamin Franklin was a test for the company’s technology. Workers connected the big AMECS hose to the ship’s exhaust, and soon enough, digital graphs on the control panel showed that Garcia’s barge, a Lilliputian compared to the Benjamin Franklin, was scrubbing the emissions clean.

Equal parts engineer and businessman, you might suspect that Garcia has a degree in both. But the 52-year-old never went to college. When Garcia was a toddler, he came to the U.S. from Mexico with his mother and stepfather. They went to Mettler, a tiny Central California Valley town, where he grew up picking onions alongside his nine brothers and sisters. When he graduated from high school, he connected with his biological father, who owned a small company using vacuum trucks to clean up big spills in Los Angeles. That’s where his interest in environmental services began.

Garcia helped clean up spills at the company for 11 years. After his father passed away, he decided it was time to start his own environmental services company. But he still wasn’t a U.S. citizen.

“Even though I’d been here my entire life, I was always concerned about my legal status,” says Garcia, who didn’t attain U.S. citizenship until 2005. His anxiety over living in a country that routinely deports Mexican immigrants didn’t stop him from making big moves.

California is looking to clean up its ports, and that’s likely to give Garcia’s business a boost. But he cares about more than that. “The people who are being affected by emissions want changes that help them live their lives a little longer,” he says. He counts those people and local environmental-justice activists as allies, bringing them into conferences and meetings, and sometimes provides ferry boat rides so the people of color most affected by pollution from the Port of Long Beach can see first-hand what they’re up against. He also hosts fundraisers for environmental justice groups in his office — the same groups demonstrating against the very companies Garcia works with. His office sits across the hall from PBF, an oil refiner that recently bought ExxonMobil’s big refinery in the Los Angeles area.

“Some people think I’m too close to the community,” Garcia says. But he wants to work with everyone to make a clean port.

Garcia’s big-tent gamble has paid off because he’s stuck to his principles of hard work, local community engagement, and tireless determination. Standards this tech hero learned as an undocumented child, picking the crops that fed the rest of California.

9 figures to help you understand the state of renewable energy