When wine runs dry, these drones have your back - Grist 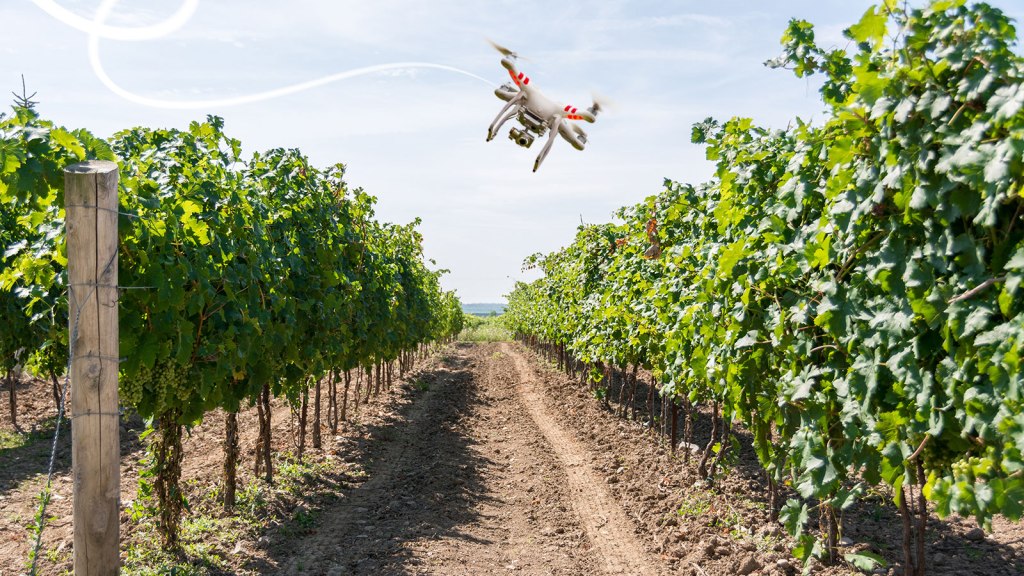 When wine runs dry, these drones have your back

There are plenty of reasons to fret about the havoc that climate change will wreak on global food systems, but none worse than the fate of one Vitis vinifera, if you ask this Italian-ish francophile. But I’ll let someone else whine about the ravages of the Anthropocene; I prefer to wine about it.

Perhaps no one takes this issue as seriously — and creatively — as Australians, whose latest trick to protect their plonk goes above and beyond even their proclivity for applying sunscreen to their crop: Using drones to monitor and treat overheated vines. Here are the deets from Co.Exist:

One solution: Using fleets of drones to take detailed shots of the grapes, analyzing that data with an app, and then using automatic irrigation and fertilization to target specific vines that are suffering in a heat wave or drought. […]

“People used to rely on satellite technology or airborne techniques,” says Sigfredo Fuentes, the University of Melbourne researcher who leads the Vineyard of the Future. “It’s expensive, and low resolution. You don’t get much information, and you can’t afford to do it often. Now with drone technology and multicopters, you can do your own monitoring … .”

The tech bandaid is moving beyond Oz. Growers in California have also started using unmanned aerial vehicles to keep an eye on the inevitable challenges of a greenhouse-gassed climate.

Those challenges put the squeeze on vintners: Grapevines, obviously the most important plants on the planet, are often the first to wilt under the pressure of the higher temperatures, longer droughts, and other unseasonable weather extremes we expect from climate change. We know that this could mean bad, boozier wines, the end of grape production in some of its traditional centers, and a weird beginning in some strange, new ones — Scottish Syrah, anyone?

You’ll forgive this wino if she’s still nervous. While we can hope for a lot of things from the tech of the future, I’m not sure robots telling us where and when to water our plants counts as a foolproof bulwark against a radically warmer, drier, wine-scarce future. Droning growers admit this weakness in their plan:

“The basic idea is to push the regions that are currently producing to the maximum — trying to extend production for another 10, 15 years,” says Fuentes.

“It’s not a permanent solution,” he says. “In the long term, you need to change varieties, or change regions. You’re changing styles of regions that have been characterized for hundreds of years.”

Only 10 to 15 hot, drone-filled years left to drink the last Tuscan wines? Clear my schedule.