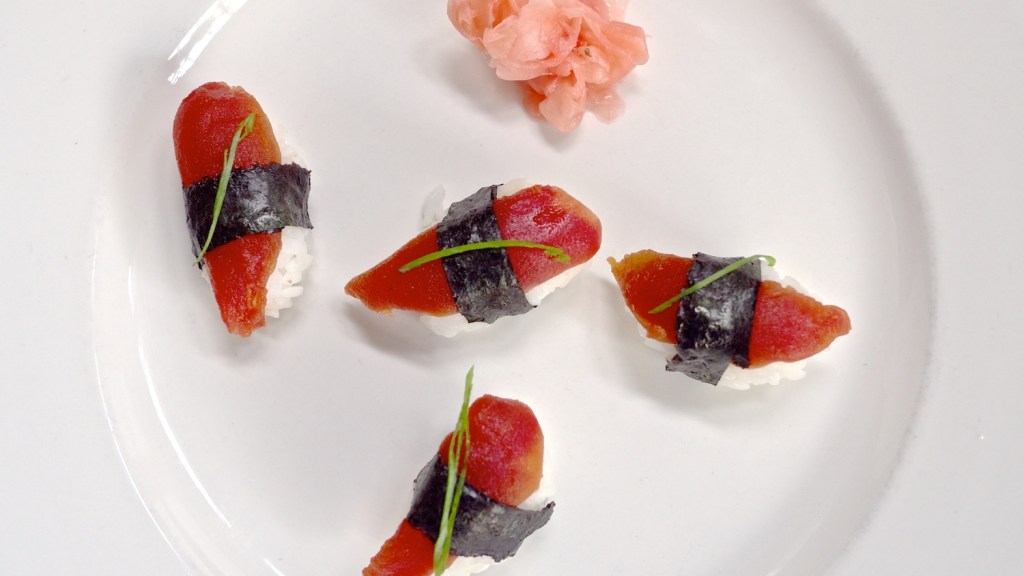 Hate to break it to you again, sushi fanatics, but we’ve practically eaten Atlantic bluefin tuna to extinction. It’s well-known that our insatiable hunger for the species’ delectable ruby flesh has depleted American stocks by as much as 80 percent, yet bluefin still appears on menus worldwide.

In an attempt to bring a little sanity to the timeless appeal of the all-you-can-eat sushi buffet, vegetarian faux-fish (or “vish,” mayhaps? Uggghhh, sorry) is steadily gaining popularity with chefs and meatless protein manufacturers across the country. Think of the seafood alternative as imitation crab’s way cooler, more environmentally friendly cousin — except entirely veg.

“So much of sushi is visual, and using vegetables gives us the opportunity to use so many beautiful colors,” Trenor says. “We have some dishes that feature the bright color of tuna meat. Are we trying to mimic maguro? No. Are we trying to put purple and red into the menu? Yes.”

If you don’t live in San Francisco, you might be in for a wait for vish. The alt-seafood market still has a long way to go before it catches up with the popularity and scope of its meat-, egg- and dairy-free brethren. Behind the scenes footage at factory farms is more prevalent in the media — and more on the minds of consumers — than the world’s fish stocks in crisis. Some food manufacturers are starting to think about fish, though, like Beyond Meat, an L.A.-based company that manipulates the amino acids, fats, carbohydrates, and minerals from soy and pea proteins to recreate meat proteins. The company currently makes vegan ground beef and chicken, but as Bland reports, a tuna alternative looms on the horizon.

A sushi roll draped with a veggie “fish” fillet sounds a little odd, and the jury’s still out as to whether faux fish can trump the beauty and subtle sea tastes of its real counterparts. But hey, faux meat has come a long way from the days of cardboard-esque soy patties, and consumer demand doesn’t lie: Sales from meatless soy products alone top $700 million a year. It may only be a matter of time before fish-less fish catches on, too — hook, line, and sinker.