Who should profit from solar energy? 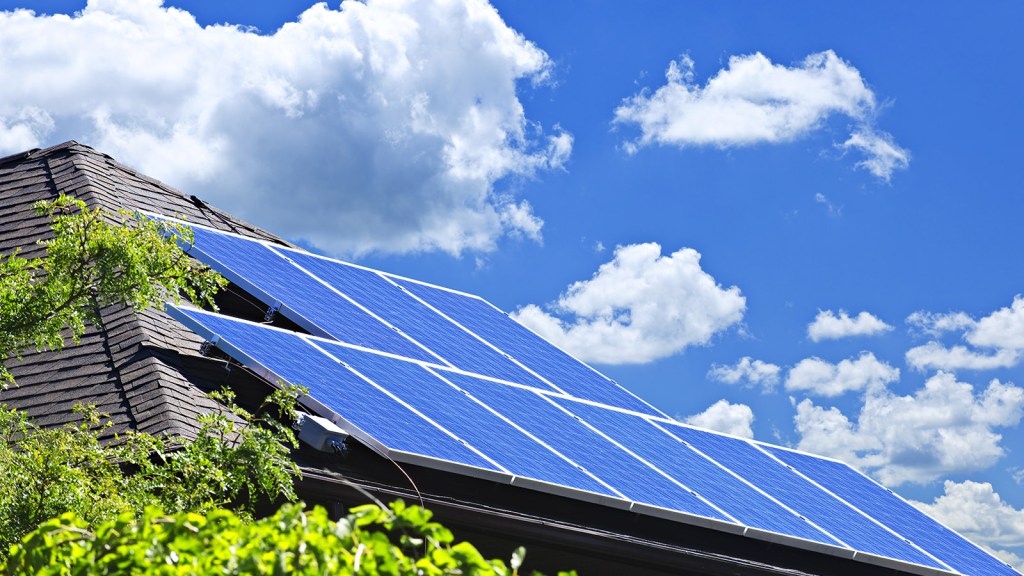 Who should profit from solar energy?

In the ongoing wars over solar energy, one power company is consistently painted as the archetypal, mustache-twirling nemesis of clean electricity: Arizona Public Service. So you might be surprised to learn that this same company is about to become a big new producer of rooftop solar power.

APS is an unlikely solar patron: In the summer of 2013, the Phoenix-area utility launched a campaign to weaken Arizona’s net-metering rule, which requires utilities to buy the extra solar power their customers generate and provides a major incentive for homeowners to install rooftop panels. A few months later, APS admitted giving cash to two nonprofits that ran an anti-solar ad blitz in the state. Early this year, the Arizona Center for Investigative Reporting revealed that a letter criticizing the solar industry’s business practices, sent by members of Congress to federal regulators, was originally authored by an employee of APS. And a couple of weeks ago, APS asked state regulators to let the company quadruple the fees it tacks on to the monthly bills of solar-equipped homeowners.

It makes sense that the company would be worried about solar’s epic takeoff. In many ways, the solar boom poses an unprecedented threat to big electric utilities, which have done business for a century with essentially zero competition. In the first quarter of this year, applications for solar permits in APS’s service area were 112 percent higher than the same period last year, and every one of those is one less customer for APS’s regular power supply, 40 percent of which comes from coal. Now the company thinks it has found a solution to the problem: It wants to start owning its own rooftop solar.

In December, the Arizona Corporation Commission gave a green light to APS to plunk down $28.5 million on 10 megawatts of solar panels, enough to cover about 2,000 of its customers’ roofs. (Tucson Electric Power, another utility in the state, was also approved for a smaller but similar plan.) The idea is that APS will target specific rooftops it wants to make use of — in areas where the grid needs more support, for example, or west-facing roofs, which produce the most power in the late afternoon, when demand is the highest. APS would offer homeowners a $30 credit on their monthly bill, according to Jeff Guldner, an APS vice president for public policy.

The credit essentially serves as rent for the roof, where an APS-contracted local installer will set up a solar array. APS owns the panels, can use the power however it wants, and gets to improve its clean energy portfolio without losing customers to third-party solar companies. Meanwhile, the homeowner gets a lower bill.

Sounds great, right? Apparently, more and more utilities are starting to think so. Power companies in New Hampshire backed a state bill this month that would have made it easier for them to own rooftop solar, but it was killed in committee. San Antonio’s CPS Energy recently put out a call for contracts with local solar installers to develop projects on its customers’ roofs. Nick Culver, the lead U.S. solar analyst for Bloomberg New Energy Finance, thinks the trend is gaining traction and predicts that more utilities like APS will jump into the rooftop solar market.

“It’s all about control,” he said. Utilities “can justify it [to their shareholders] by saying we’re going to profit from this, rather than waiting for other solar companies to take all of the market.”

But independent solar companies and some regulators are concerned that letting big utilities into the rooftop solar market will unfairly squeeze out competition, hurt innovation, and ultimately stick customers with higher costs. The result, they argue, will be that fewer households end up choosing solar power.

“The utilities are using their vast economic resources to encourage people to go with them,” said Gabe Elsner, executive director of the Energy & Policy Institute, a clean energy think tank in Washington, D.C., “What we’re seeing is a monopoly trying to retain its monopoly.”

There are a couple of concerns here. One is that power companies will be able to use their deep pockets and preexisting control of the energy market to undercut smaller third-party companies like SunRun or SolarCity, if those companies aren’t able to offer monthly savings greater than APS’s $30 credit. (Last year, SolarCity told the Arizona Republic that most customers who lease panels from them save about $5 to $10 per month.)

Noncompetitive strong-arming came to a head in Washington state last year, where utilities backed a bill introduced by Democratic state Rep. Jeff Morris that would have banned third-party solar companies from offering leases in areas where a utility company was also offering rooftop solar. That bill was killed, but the potential was enough to spook New York regulators, who decided last month to bar utilities from owning their own rooftop systems except in rare cases. “By restricting utilities from owning local power generation and other energy resources, customers will benefit from a more competitive market, with utilities working and partnering with other companies and service providers,” the state’s Public Service Commission said in a statement at the time.

The other concern is that utilities will be able to leverage their monopoly to make all their customers pay for the panels the company buys.

“We welcome the utilities competing in open markets, but that’s not what this is about,” said Bryan Miller, a vice president of SunRun, a prominent national solar installer. “This is about guaranteed profits.”

Here’s what he means by that: Electricity markets are different than those for other products. In most parts of the country, electric utilities are a monopoly; they get complete control of the market in exchange for having their business heavily regulated by the government. Whereas, for most other products, competition between businesses drives prices down, utilities have always been rewarded for spending lots money on infrastructure like power plants and transmission lines. That’s because utilities are generally allowed to charge those investments back to their customers in the form of higher electric rates. In fact, that’s the fundamental way utilities make money.

The same process would apply to rooftop solar panels, APS’s Guldner said. The next time APS goes before the state’s corporation commission to ask for a rate increase (probably sometime within the next year), they’ll count these rooftop systems alongside power plant upgrades and other infrastructure that should come back as revenue through their customers’ bills.

“The solar resources that come from these systems are going to all the customers,” Guldner said. So, he argues, it makes sense that everyone should chip in for them like they would with any other part of the grid system.

The program will also help get solar onto roofs that normal net metering and solar leasing programs wouldn’t cover. For example, APS plans to target low-income customers, who might not have a high enough credit score to apply for their own solar lease.

APS also plans to target west-facing roofs. The vast majority of solar arrays face south, which usually yields the highest annual power output. That’s ideal for most solar homeowners because with net metering, the more sun you capture, the more money you get. But those panels’ peak production is at midday, so it doesn’t jibe with overall demand on the grid, which peaks in the late afternoon as people come home from work and flip on their lights, TVs, and air conditioners. West-facing panels, by contrast, produce up to 20 percent less energy than south-facing panels overall, but they produce at least 20 percent more in the late afternoon as the sun is setting, according to energy software company Opower. That makes west-facing panels more attractive to utility companies, and with net metering out of the equation, customers shouldn’t care if their panels are a bit less productive.

The debate over whether utilities should be able to own solar panels on your roof is still in its early days. Guldner says APS hasn’t yet built any panels for this new program (they plan to start within a couple of months). And Bloomberg’s Culver said that nationwide, the amount of utility-owned rooftop solar is still so minuscule that there isn’t even any good data on it. But as more utilities compete for their customers’ rooftops, there should be some lessons ahead about how to make the grid more compatible with a solar-powered future.