A year after Sandy, New York City slowly bounces back 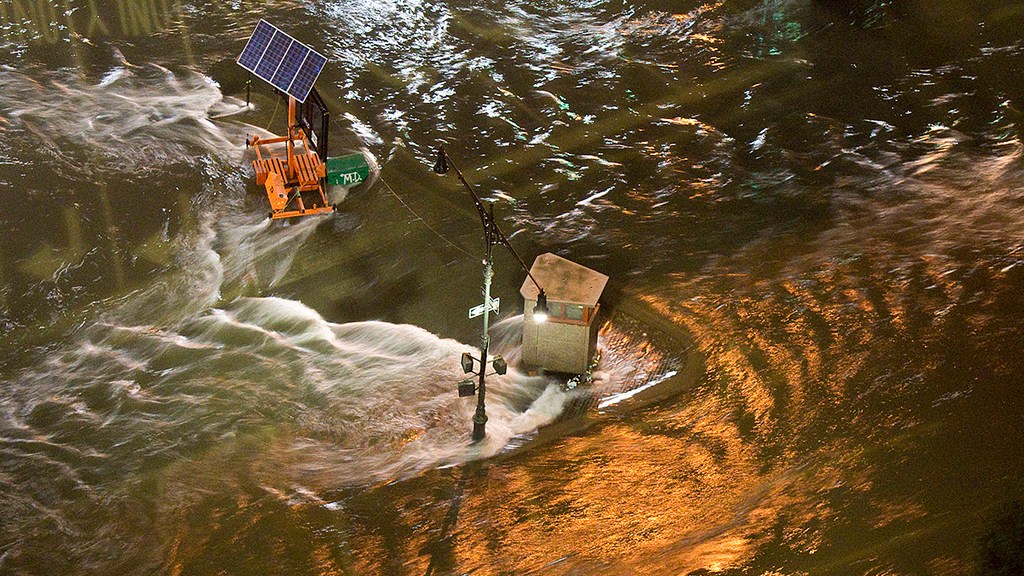 A year after Sandy, New York City slowly bounces back

Sandy didn’t much inconvenience me at the time. There’s a bar just downstairs, and if I wanted to, I could have spent a good part of the storm drinking. But I had more work than usual, since I write about climate change and disaster preparedness, and as the storm started, so did emails from editors. Our power stayed on through the whole storm, and I spent three days straight writing, talking to sources over crackling cellphone connections, feeling lucky that we’d moved, a couple months before, out of the East Village — our old apartment was just a few blocks from that power station that blew — and thinking about friends who still lived there.

Now, Sandy inconveniences me almost every day. It began maybe six months after the storm, when the R train, my subway train, started stopping at random. The conductors kept mumbling something over the intercom about “signal trouble.” One day, I got on the train, and it pulled out of my station — and no farther. You could probably still see the train from the platform, if you stuck your head out and craned your neck. The train stayed there. I’m not sure for how long. It felt like a long time. More than half an hour. Maybe 45 minutes. Long enough that I started to hate the two nattily dressed friends sitting across from me who complained the whole time that this, this was why people didn’t take the subway.

But I couldn’t blame them: We were trapped like hamsters in a box, and everyone was freaking out, a little bit. Finally, finally, finally, we moved to the next stop, maybe a 10-minute walk from the station where I had boarded, and every single person got off the train and transferred to another line. Any other line.

The R gets to Manhattan by going under the East River, through a tunnel that was flooded during Sandy, and though the MTA got the train running again soon after the storm, the wiring was fried. In August, the MTA shut the line down entirely. Earlier this month, the agency released footage of the tunnel, and you can watch the workers jackhammer the concrete off the tunnel walls. No one jackhammers the walls off of an underwater subway tunnel unless they really need to.

If the repairs go according to schedule, the tunnel will open again in October 2014, two years after Sandy hit. Back in June, when he announced the closure, the acting head of the MTA acknowledged that the tunnel repair would “be an inconvenience for many of our customers.” The official number is 65,000 — a small fraction of the 5 million people or so who use the system on an average weekday. And “inconvenient” is the right word here. No one’s stuck. No one’s life is wrecked. Commuters have to transfer to another train — they have to budget maybe 10 minutes extra each morning and each evening, and they might not get a seat on the more crowded train they’re forced to take. Out-of-town visitors are confused. It’s not a tragedy.

Climate and preparedness wonks talk about “resilience” — how quickly can a community recover after a disaster? How tough are the houses, the roads, the subway system? But this what it comes down to, really. How many people will have their businesses damaged, their homes ruined, the course of their lives changed? And how many will be simply inconvenienced?

Without resilience, you’re more likely to have tragedies. And there were plenty of those in New York after Sandy. Displaced families have lived in hotels for months while they wait for their homes to be fixed. In Breezy Point, where more than 100 houses burned down during the storm, and hundreds more were left uninhabitable by fire, rain, and flooding, only a handful have been rebuilt. Just this month, the city’s recovery program bought its first property, from Patricia Dresch, whose husband and daughter died in the storm. Her house is gone now, and the city will keep the property or sell it to someone who promises to build back a more storm-steady structure. There are more stories like these: Over the summer, 22,000 people still hoping for help fixing up their properties or paying for repairs registered for the city’s Build It Back program, which has $648 million of federal disaster aid to dole out.

In a resilient city, things would be different. With resilience, you just have inconvenience. You’re annoyed. You spend longer on the subway. The people who are stuck there with you are also annoyed. (And sometimes annoying, too.)

What will it take to get us to resilience? To the point where we’re annoyed, not destroyed? One of the challenges of toughening up a city like New York against hurricanes, or any other climate-driven disaster, is that a lot of people live here. The Bloomberg administration says there are more than 400,000 people living in the 100-year-flood plain. That’s more people than live in Minneapolis or in Cleveland, and it’s only about 5 percent of the city’s population. Four hundred thousand people are not going to move; it’s going to take time and money to flood-proof these people’s houses, and they’re probably going to complain about it — sometimes it’s hard to see that inconvenience now can prevent tragedy later.

But facing inconveniences is pretty much what life in New York is about. We deal with long waits at our favorite restaurants, terrible traffic, overcrowded bikeshare stations, subway delays, romantic competition, high rents, the smell of rotting garbage, and the dangers of living on the Atlantic Ocean as the sea level rises — and we complain about them, knowing all the while that we’ll do whatever we can to stick it out here, anyway. So what if it’s going to cost tens of billions of dollars to storm-proof the city? We’ve already decided that New York is worth the investment.