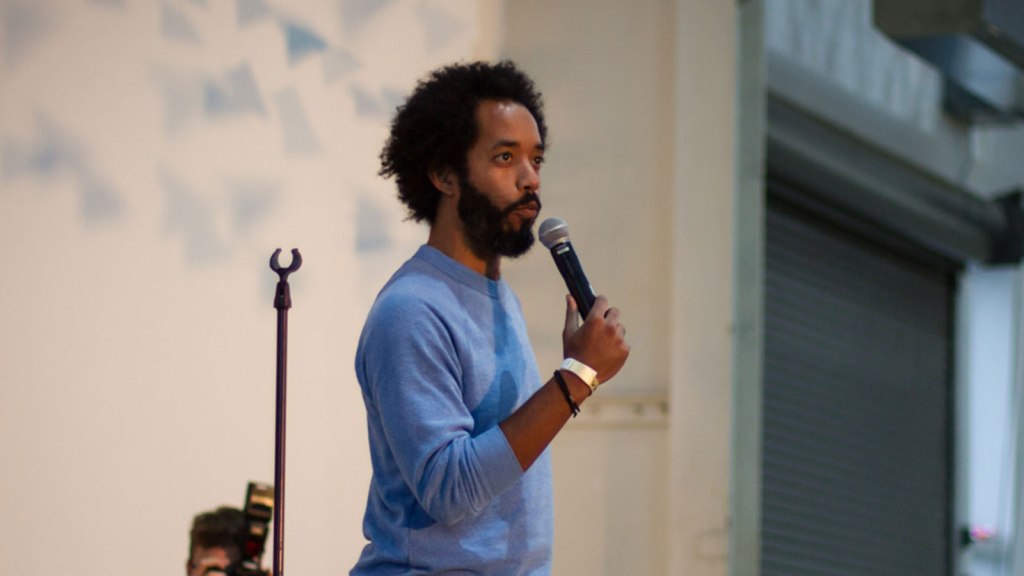 You might know comedian Wyatt Cenac from his time at the Daily Show, where he played one of Jon Stewart’s correspondents. One of his classic sketches on the show was about Turkey Creek, Miss., a town founded in the late 19th century by emancipated African Americans that today has been fighting off land grabs from developers, when it’s not fighting through disasters like Hurricane Katrina and the BP oil disaster.

In Cenac’s sketch, he bemoans the fact that when Turkey Creek residents’ own pleas to preserve their community failed, it took the Audubon Society’s discovery of unique bird habitat there to protect the neighborhood — the punchline being that birds were afforded more protection than actual people, as much of a sucker punch as that was to the residents.

The issue of black people losing their community to invasive species is one Cenac also explored as the lead character of the 2008 movie Medicine for Melancholy, set in Oakland, Calif., and which deals straightforwardly with concerns around gentrification.

It’s a third-rail issue that rarely seems to end productively, or with adequate resolve, when discussed publicly, given that racism and classism are intricately intertwined in the topic. And yet Cenac had the courage to visit it again in his new Netflix special, Brooklyn, where he uses comedy and puppets (!) to discuss the many ways in which the New York City borough is changing.

Native Brooklynites have been displaced to make way for a new NBA stadium, kids toy stores and what Cenac jokingly terms “ironically named pet grooming stores like Pup, Pup and Away!” But nothing seems more troublesome to Cenac, in his new special, than the existence of a new mayonnaise store, which he calls, “probably the most cartoonish, stereotypical sign of gentrification” he’s ever seen.

Cenac is currently on tour, through the end of November, but he made time to talk about some of these uneasy topics with me by phone yesterday. We did not solve gentrification in our discussion, but just in case you want to hear a little about our struggles with it, here ya go:

Q. So we gotta start with one of the toughest issues to talk about: mayonnaise. Why is there a mayonnaise store in Brooklyn?

A. For me personally, I’ve never been a fan of [mayonnaise], but it’s a very strange thing to see a mayonnaise store — like a store that only sells mayonnaise. Not that I would be happy to see a ketchup or a mustard store, but mayonnaise can be a divisive thing. The fact that you can afford to buy real estate and devote it solely to a mayonnaise establishment, that seems to suggest that you have a lot of money that you’re willing to throw around, because [mayo] doesn’t seem like a hit with everybody.

Q. Have you heard about the mayonnaise beef? The disruptive mayo company that’s currently whipping the Mayonnaise lobby?

A. I do not want to get involved in that, that sounds like some East Coast-West Coast rap level rivalry there.

Q. When I think about a mayonnaise store growing in Brooklyn, I can’t help but think that perhaps there’s some black person nearby who probably has the bawsest BBQ recipe, but probably couldn’t get a BBQ sauce store opened, for a lot of reasons.

A. Right — I remember walking through Fulton Mall, and I saw maybe three or four black hair salons all basically next door to each other. And to me it said two things: [One], when you hear politicians talk about entrepreneurs and small business owners, very rarely does it feel like they’re talking about the hair stylist who went to hair school, worked her way through the studio, saved up her money, put together a business proposal, then went and got a bank loan, started her thing on her own and is making it work.

Two, I don’t know if it’s due to economics, but there’s something interesting about the fact that here there are four hair stylists who dared to dream, and that that’s the safest dream for them — and that they all wind up having the same dream. Perhaps they don’t have the kind of financial safety net where they can say, “You know what? I’m gonna go all in on a mayonnaise shop.”

And that’s not to take anything away from the mayonnaise shop people — the last thing I want is them throwing mayonnaise at me, because I really do not like the taste of it. But, it just says something to me about the idea that you’re more willing to take a risk when you have a little cushion behind you.

Seeing those hair salons all together, those are people who are taking risks, but they’re taking a safer risk because they have a hell of a lot more to lose. They maybe aren’t going to venture out and say, “Yeah, I’m gonna go all in on BBQ sauce,” because if it fails, you lose everything, because you put everything into it. Going to hair school is safe. Everybody’s gonna need a haircut. Not everyone is gonna need BBQ sauce.

Q. Let’s move to an easier topic to discuss: Gentrification. You hit this topic in both your standup Brooklyn and also in Medicine for Melancholy. Is this a real sore spot for you, or is it just coincidental that your material keeps returning to this topic?

A. It’s probably a little of both. I didn’t write Medicine, but part of what drew me to that film was the fact they were having these conversations in the film about a real thing that exists in a lot of cities.

With gentrification, there’s the kind that is wealthy people moving into a neighborhood and adding themselves to the neighborhood. That can be a net positive, if wealthier people move into a neighborhood and then use their clout to effect change. If I’m a politician and I know that there’s money in that district, I’m going to try to lobby those people with money. So those people, if they are part of the neighborhood, will say, “OK, if you want my money, my donations, you have to do things that help all of us. You have to make the schools here better for all of us, because I want my kids to go to school across the street.”

Then there’s the other kind [of gentrification] that’s more often than not what happens: You have wealth come into your neighborhood and it winds up pushing everyone else out. They don’t inject themselves in the neighborhood. They don’t care about the school across street, because they’re going to put their kids in private school, miles away. So the school across the street suffers as a result of that. As that schools suffers, then maybe it becomes less safe, because maybe the kids in that school end up dropping out, because they’re frustrated. Those kids maybe get involved in things that are a little less savory, and so now these wealthy people are saying, “We need a police presence to protect us from these people.”

But “these people” lived in the neighborhood before you, and now you’re just slowly moving them out and making them feel unwanted. That, to me, feels like the negative side of it. Wherever you live, what’s important is that you have a sense of neighborhood and community, that you know your neighbors, and you are aware of each others lives. You’re realizing that you all have to work together to make your street whatever you want it to be. To me that seems like that’s what everybody wants, but that’s what we’ve gotten away from.

Watch this clip from Medicine for Melancholy where Cenac’s character, Micah, takes in San Francisco with his love interest, Jo, played by Tracey Heggins:

Q. Has anyone ever accused you of being a black gentrifier?

A. Oh, fuck yeah. Part of the weird push and pull for me with my comedy special is this notion that I am both the gentrifier and the gentrified. I physically look like the type of person who is getting moved out of a neighborhood, even though I’m moving into the neighborhood. It’s a neighborhood that I have a connection to, because I used to spend a lot of time in Brooklyn with my grandmother who lived here. I was here as a little kid staying with my grandmother in the summers, but the rest of the year I was living in Texas.

[Today], I can’t sit here and try to terraform the neighborhood. What I try to do is be a part of it, and try to be involved in a way where I’m not the person pushing people out, but rather, if I can do things to help those people stay, then that’s the goal.

Q. Do you ever worry or feel guilty that approaching these issues through comedy might be reductive to some people — since we’re talking about people’s lives?

A. To me, its not a thing of making someone who’s losing their home the butt of the joke, but if it puts it in people’s minds, then that’s maybe one avenue to get a conversation going. Better that it can come from a positive place and a creative place, than being bombarded with the horrible reality of it, because some people end up tuning out to the horrible reality of things.

I saw the movie Dear White People, and I thought one of most interesting things was in the closing credits, when they showed this montage of news stories [of racist college Halloween parties] that inspired the story of the film. What’s so bizarre when you see it, is there is just story after story after story, and you begin to realize that we probably just got numb to the story.

So, if anything if a movie winds up finding a new way to have the conversation, because the news coverage isn’t doing it, then maybe that helps to at least raise the conversation to another place. If you’re just shitting on somebody, then yeah, you can feel guilty about that. But if you’re causing people to talk, then maybe there’s something to it.

You and I are having a conversation right now about gentrification for publication, and we might not have been having that conversation otherwise. And maybe there’s somebody who might get to this article because they were just Googling to find stupid pictures of me … there are a lot of them.