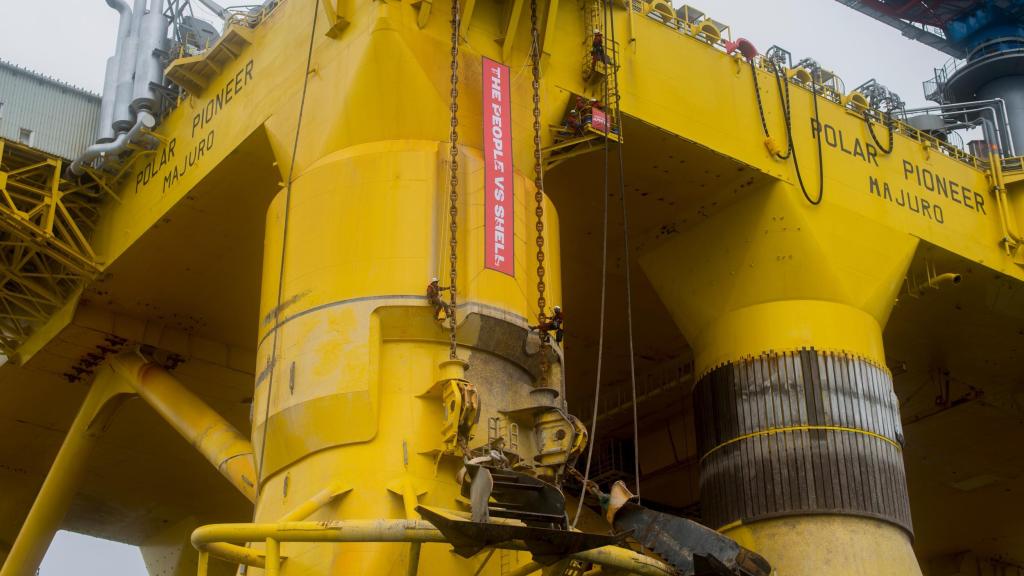 As a Shell drilling rig advances ever closer to Seattle, activists from the city and beyond are hell-bent on foiling the oil giant’s plans.

Shell is preparing to drill for oil off the Northwest coast of Alaska this summer, undaunted by its notorious botched drilling attempts of 2012. The company plans to use the Port of Seattle as a staging ground for its operations up north, and is currently shipping the Polar Pioneer rig across the Pacific Ocean to Washington state waters. The rig and its carrier ship are set to arrive at the end of this week in Port Angeles, 60 miles northwest of Seattle, and could be docked there until May for inspections and other preparations, reports Seattle alt-weekly The Stranger. After that it will move on to Seattle ­– if activists don’t stop it first.

Though Seattle port commissioners approved Shell’s plan in January, that decision is not sitting well with many residents and leaders of this eco-conscious city. The mayor and city council members have launched an investigation into whether the port commission’s decision was legal. Meanwhile, grassroots activists are preparing to meet the Polar Pioneer in a flotilla of kayaks when it nears the city — a very Seattle form of protest.

Activists from Greenpeace International recently staged a showy protest of their own. Last week, six of them scaled and attached themselves to the Polar Pioneer while it was moving through the middle of the Pacific. They camped out on the underside of the main deck for nearly a week to protest and raise awareness about Shell’s plans. Shell responded by filing for a restraining order against Greenpeace. But before a judge could rule, the activists decamped over the weekend when the waters became too rough.

“I might be climbing off this oil rig, but this is merely a transition into the next step of saving the Arctic,” said Aliyah Field, one of the Greenpeace activists. “I can’t wait to join the millions of voices, the volunteers in Seattle, and all Americans who believe we deserve better, safer, cleaner forms of energy.”

A temporary restraining order was granted after the Greenpeace team vacated the rig. In future demonstrations, Greenpeace activists must stay 1,000 meters away from the Polar Pioneer and the drill ship Noble Discoverer, which is also on its way to Seattle, while the vessels are moving. In a separate decision, the Coast Guard announced on Tuesday that other protesters, like those would-be kayakers, will have to stay 500 yards away from the vessels while they’re moving and 100 yards away while they’re stationary.

Activists are also fighting Shell in court. Environmental organizations including Earthjustice, the Seattle Audubon Society, and the Sierra Club filed a complaint against the port in King County Superior Court last month. The complaint alleged the port violated its own terms by leasing out Terminal 5 as a homeport, rather than its intended use as a cargo lane, said attorney Patti Goldman, who is working on the suit. The port tried to get the case thrown out, but on March 20 the court decided to allow it to proceed.

“When we won the first round [of the lawsuit], that made us feel optimistic. Unfortunately, other parties have been stymieing us from moving forward. Hopefully we can break that soon,” said Goldman. She and her allies are crossing their fingers that the court rules in their favor before Shell’s drilling rigs arrive in Seattle.