There are about 120 million shipping containers around the world at any given moment, doing what they were designed to do, which is to encase the oddly sized things that people enjoy (crop tops, frozen fish fillets) and then be completely interchangeable with each of their 120 million relatives — and thus able to be stacked on a boat, train, or flatbed truck without unpleasant surprises.

Depending on who you talk to, shipping containers were also designed to replace unionized longshoremen with non-unionized cranes. Whatever the original impetus, the planet has acquired a lot of them since the first few were built in the 1950s, with one unintended effect: They’re irresistible to architectural design competitions.

It’s not hard to see the appeal. Shipping containers look exactly like building blocks, which is the primary medium (other than dirt) that most architects started working with. You can buy used ones for about $1,600 a pop, which seems like a steal for housing. Doing that also feels very environmentally conscious, because you’re taking something that already exists and reusing it for a different purpose. For these reasons, architects in particular are drawn to the idea of using shipping containers as housing for poor people — as is the case with this plan for a skyscraper made of them, which just won a design competition for low-income housing in Mumbai. 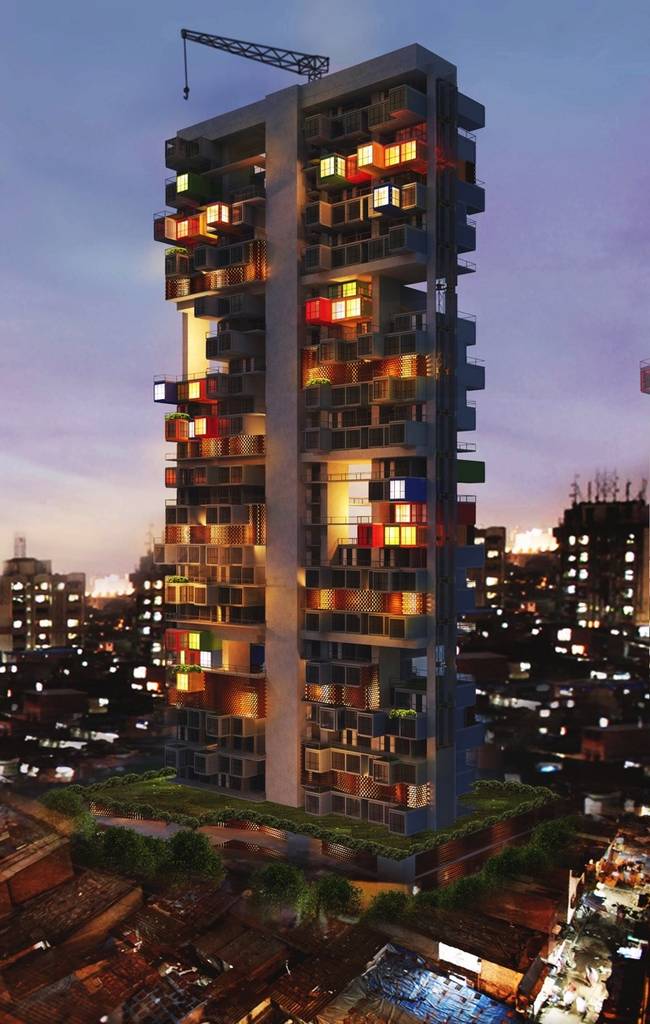 For one thing: A building made of corrugated steel is going to be a miserable residence, especially in a place as hot as Mumbai. You could add insulation and a ventilation system — but that would make a box that already has awkwardly low ceilings even smaller. You could add windows — but that would require cutting through steel walls, which takes specialized equipment, and a contractor who knows how to use that equipment.

In fact, implementing the above design would take a lot of hidden help, in the form of bracing and structural reinforcements, because shipping containers only work if they are stacked neatly on top of each other. Get creative, and they’ll collapse from the unevenly distributed weight.

Relatively untrained people can build a room that size of simple wood framing in a day without needing to rent a crane or learning how to weld for about the same cost (or less) than buying a used container.

Add to that the fact that many shipping container projects are actually built with new containers, because of the risk that old ones may have carried toxic materials, and the whole “green” advantage disappears, too.

Which isn’t to say that shipping containers can’t be creatively reused — it’s just best done in a temperate climate, with access to good welding equipment. When all is said and done, the best use for old shipping containers is probably what they were designed for in the first place: storage.