Earlier this summer, we found out that some polar bears like to skip hibernation in order to snack all year like spoiled little divas (blame Coca Cola). So naturally, we took it upon ourselves to fire them from their role as humanity’s climate change mascot — could you imagine the PR nightmare we’d have on our hands if we had gluttons as the face of a sustainable future? Unfortunately, it looks like the polar bears are taking the news a little something like this:

According to the BBC, a group of polar bears has camped out next to a weather station in northern Russia and is preventing scientists at the station from leaving in order to do their work of taking daily ocean measurements. The scientists tried to scare the bears off with flare guns to no avail. The standoff has been going on for about a week now, and authorities are reportedly on their way with more protective gear. 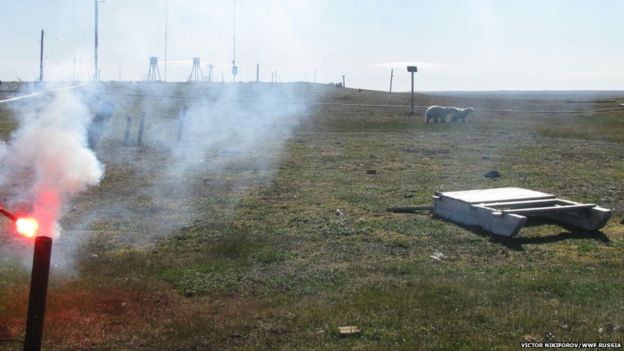 Polar bears don’t usually attack humans, the BBC reports, but that’s mostly because they’re not around humans very much. As climate change brings the bears closer to civilization, attacks are becoming more common.

Listen — we get it, guys. You’re upset. But this is ridiculous. The BBC says you started fighting over some food, and now you’re not even afraid of flare guns. Frankly, we’re starting to worry about you. Pull yourselves together, and give us a call. Maybe we can work something out.

Grey swans are extremely rare, damaging storms. How will climate change affect them?