Dozens of traffic lights in central Vienna have been programmed to show male or female gay couples with hearts — in red for stop and green for go — replacing the usual single, gender-neutral figure.

The campaign is intended to present Vienna as an open-minded city and also to improve traffic safety as the unusual symbols attract the attention of drivers and pedestrians, a spokeswoman for Vienna’s city lighting department said.

The city of Vienna will then collate data to see whether the campaign has indeed helped traffic safety, she added.

Really, Vienna? I’m as into traffic safety as the next person. But what about all the lonely gay traffic-light people who aren’t in happy and committed traffic-light relationships? Are you trying to tell them that their lives aren’t worthy of depiction in Vienna’s urban infrastructure?

What are you going to give them? Little traffic-light stick figures with broken hearts? Traffic-light stick figures with broken hearts and little cocktail glasses in their hands? Singing “I Will Survive” at the karaoke bar? Eating dinner alone at the counter of the cool new restaurant, reading a good book, and feeling smug because they’ve just realized that one great thing about being alone is never having to wait to get a table?

Are you getting what a slippery slope this is, Vienna? What about when the light turns red, Vienna? Does your approval of gay love reverse into a total homophobic freakout until the light turns green again?

The cool thing about stick figures is, the less detail an illustration of a person has, the more people identify with it. I’m all about inclusivity. But has there ever, in the history of the world, been a gay person who looked up at a traffic light and thought, with a heart full of rage and sadness, “You don’t represent me”? Gaying up previously neutral traffic infrastructure is cute, but it feels a little weird — like those rainbow crosswalks in San Francisco’s Castro district. 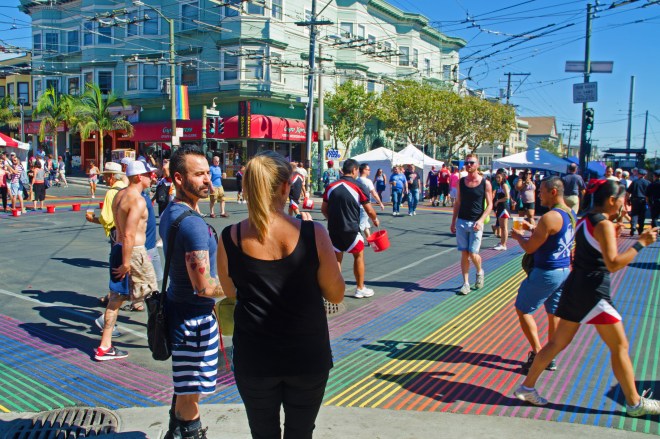 Call me old-fashioned, but I like gaying up my city the old fashioned way — by naming things after local gay activists. When I moved to San Francisco, I didn’t know much about the city’s history — I found out who  Tom Waddell was while I was doing some reporting at the Tom Waddell Urban Health Clinic. I found out who Del Martin and Phyllis Lyon were after a friend recommended I go to a women’s health clinic named after them. About a year ago, I was locking up my bike outside of the Harvey Milk Memorial Branch Library (right off of Jose Sarria Court) and saw a man standing in front of the statue of Milk out in front, bouncing a baby on one hip. “That’s Harvey Milk,” the man cooed to the baby. “Do you know who Harvey Milk is?” My heart melted, the way that it will never melt for a gay crosswalk.

Memorializing distinct (and super gay) individuals is at the other end of the spectrum, ease-of-personal-identification-wise, from gaying up universal symbols. But it also feels more honest, given how recent most gay rights victories really are in many places,  including Vienna. Gay marriage, for example, still isn’t legal there (couples have “registered partnerships” instead).

It’s not hard for a city to celebrate itself for embracing ideals like tolerance and justice and diversity. I’d rather celebrate those specific, difficult people who actually make a city live up to those ideals.