Does San Francisco need another private bus? Well, it's got one. 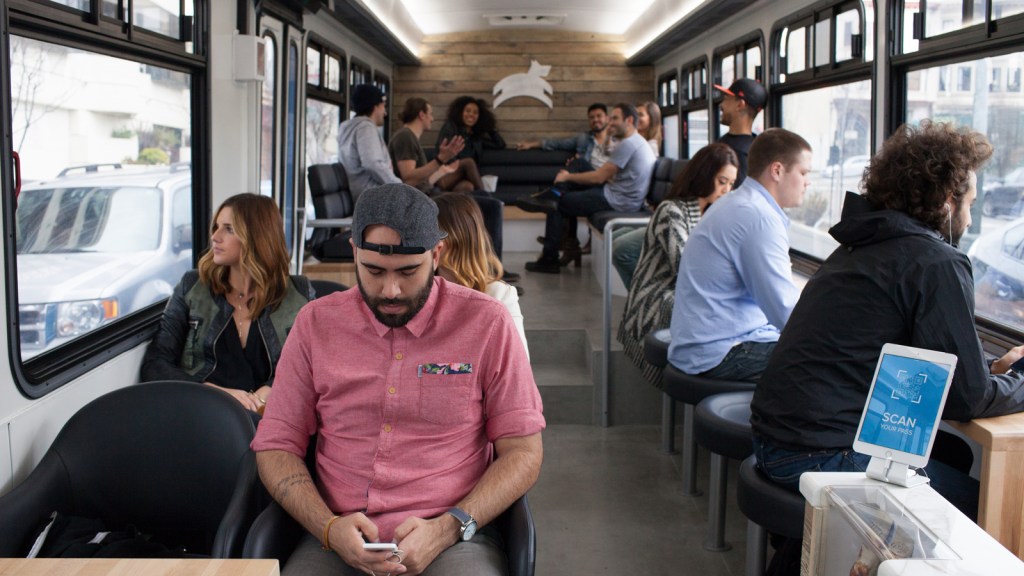 Leap Transit
Finally! A bus as pretentious as you are!

Leap, which just launched this week, is adding yet another private transportation service to the array of options available to the commuters of San Francisco — and most especially those commuters who live along the lucrative route of the Muni 30x line. Leap isn’t the first shuttle startup to occupy this space; there’s also Chariot, which costs $4 per one-way ride to Leap’s $6 — and Loup, which has been described as “the lovechild of Uber and a bus” and which charges between $2.50 and $6. A one-way fare on the Muni 30x line is $2.50. But none of the aforementioned provide the distressed-paneling, fresh-juice-sold-on-board experience.

People who take Leap can make their profile visible to other people riding the same bus — as, I guess, an enabler of networking and/or cruising. Uber and Lyft also have ridesharing apps, and when I interviewed a Lyft driver earlier this year, she told me that the Marina route was a popular one for her in the mornings, and that she had noticed that many Lyft Line users in the area seemed to be using it for DIY speed-dating. It is a truth universally acknowledged in San Francisco that everything that can be used for cruising will be used for cruising, and the Marina/Russian Hill neighborhood has a decades-long reputation as a yuppie meatmarket — exhibit A being the Marina Safeway.

This smorgasbord of new transit options feels new — but it’s very, very old. Like, 19th century old. The first public transportation in San Francisco was a privately owned horse-drawn omnibus that began hauling people between downtown San Francisco and the Mission Dolores in 1851. It cost 50 cents — which would be about $7 today — and a dollar on the weekends, but once competition emerged, the fare dropped to 10 cents. In the early 1900s, these private transit lines began to be acquired by a company called United Railroads of San Francisco, and then, in 1944, the whole shebang fell into the hands of Muni.

One of the questions in Leap’s FAQ section is “Do you use Muni stops?” The answer is: “We do not use any Muni stops and we actively try to stay out of Muni’s way.” An earlier iteration of Leap, which ran for several months in 2013, did use Muni stops, which brought down the wrath of city officials. Muni itself is hard to love — it’s slow, it’s late, it’s crowded — but every Muni alternative has had a hard time staying away from Muni’s infrastructure. The city was already fielding complaints about the congestion caused by shuttles operated by Google, Facebook, Apple, Electronic Arts, and Yahoo, which negotiated the ability to use them years ago.

Leap cofounder Kyle Kirchoff recently told a reporter for the San Francisco Business Times that Leap Transit has been working closely with the San Francisco Metropolitan Transit Authority and the California Public Utilities Commission (CPUC) to make Leap entirely legal — but that the company doesn’t actually have a CPUC permit yet.

“There’s a lot of gray area in all this,” he said. Which is true. A startup called Night School, which would have provided much-needed late-night transit between San Francisco and Oakland, spent most of 2014 trying to get a permit from the CPUC. It folded before driving a single person anywhere.

Will Leap get that permit? Odds are good. Leap, along with the other startups working in the space formerly occupied by jitneys, can afford to hire the kind of legal team that can break through political obstacles. Leap is backed by $2.5 million from Andreessen Horowitz, Index Ventures, Slow Ventures, and Salesforce CEO Marc Benioff. Loup raised $1.5 million from Twitter co-founder Evan Williams’ Obvious Ventures.

It’s noteworthy that all of these startups have limited themselves to the most lucrative routes and the most lucrative times. Unlike Muni, which still provides the bulk of transit services to the city, Leap doesn’t have bike racks, or handicap accessibility, and it doesn’t allow riders under the age of 18. Are babies allowed? Unclear. When I contacted Leap’s PR office, they said they would get back to me on it.

For this reason, Leap is already a target of critics who say it’s yet another startup in San Francisco that doesn’t so much do something new as provide a small, well-off subset of the population with a slightly nicer version of something that already exists. As Dan Hon, content director for Code for America, wrote recently in an email newsletter:

Leap isn’t for everybody. It’s for commuters. It’s for “getting to work.” It’s not for going to the doctor or dropping your kids off at daycare or trying to get to the vet or picking up groceries or getting downtown to sign up for benefits or meeting a court date.

The bigger issue, Hon continues, “is that this is a bunch of capital going in to fix a specific problem for a small class of people, and that public transit in San Francisco is just generally not in a good state and that maybe the entire system needs to be invested in so that it works for *everyone* and so that not insignificant amounts of capital are wasted on short-term solutions for small groups of people. In other words: Hey, if there’s anyone from Leap is reading? I’m calling you out. If You Don’t Mean Everyone, Don’t Say Everyone.”

Until the 1970s, a system of private jitneys filled much the same role that Leap, Loup, Chariot, Uber, and Lyft are all jostling for in the present. Then, in 1972, the city stopped issuing new licenses in order to protect Muni’s revenue. A few years later, voters passed a law banning the sale of licenses from one jitney driver to another, and insurance rates for commercial drivers began to rise to the point where driving a jitney didn’t make much financial sense anymore.

They vanished, except for one — the man they call Jess Losa, who runs a circuit between Caltrain and downtown and charges $2.25. Losa has decidedly mixed reviews, but he’s been on the road for 43 years now, occupying a niche that the city could have closed years ago. It remains to be seen whether any of the new startups manage to hold on for that long.