The next Google headquarters — or Googleplex, as the company calls it — will be a collection of modular buildings that can be shifted around underneath a collection of giant glass domes that perch over the landscape like jaunty little sun hats.

Cars will be relegated to garages deep beneath the earth, but people can run or bike on a ground-level track that runs along the base of the biggest dome. Aboveground, people can pick fresh fruit from the trees. The landscape will be “re-oaked.” Wetlands will be enabled.

The Googleplex is more than just a headquarters. It is, we are told, a gift to the 80,000 residents of Mountain View, Calif., where Google has been based since it had 12 employees working in the Bay Area instead of 20,000.

“A motivator for the work that we do now is to be generous,” says Thomas Heatherwick, one of the architects, in the glossy promotional video that Google released to accompany its renderings of the new complex. “To make buildings that allow the public as well as employees to move through them — to create places where you would go for a walk with great pleasure.”

If you think Google has something that it wants very, very badly from the city of Mountain View, and that it is putting these drawings into the world the same way that a bowerbird builds a little nest out of sticks and does a courtship dance in front of it, you would be correct.

Google is promising a lot to the city of Mountain View if it signs off on this new Googleplex. It’s promised to help fund a new network of bike paths connecting Mountain View and other suburbs. It’s promised two new pedestrian bridges over Highway 101, which currently separates the Googleplex and its neighbors from the rest of Mountain View. It’s also promised a new public safety building, two new parks, an educational science center, a major expansion of the free shuttle system that Google started running in Mountain View this summer, and $1.5 million in scholarships for local high schoolers.

Why such generosity? We’ll get to why later. Right now, let’s look at the sticks. Architectural drawings are their own fantastical art form, and much of what is happening in these images may never see the light of day — like the yoga on a platform three stories in the air with no visible safety barrier. 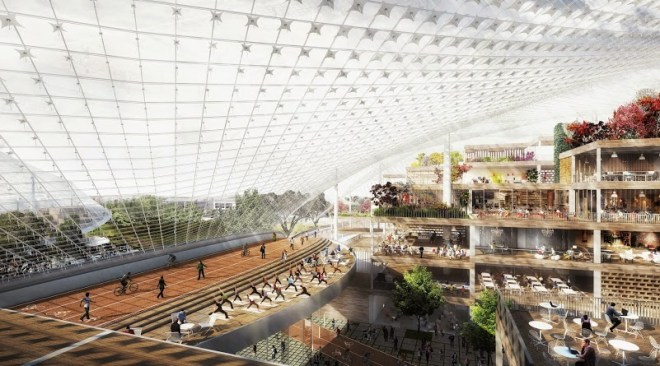 But one feature that probably will come to pass is the ground-floor retail development — not something you commonly find in a suburban office park.

“Our idea for the Google campus is to give it the diversity, the liveliness that you find in an urban neighborhood,” Heatherwick explains.

It is true that, in cities, office buildings often have stores and restaurants at ground level, for the same reason that they rent out surplus office space in their own buildings — the place is convenient for plenty of other people, not just them, and so it’s a good way to bring in some extra cash. In Google’s case, the land the company is occupying, North Bayshore, is isolated from the rest of Silicon Valley on all sides by either freeways or the Bay. No one is going to be passing through the Googleplex on the way to somewhere else. How many of Mountain View’s residents — even those who live fairly close by — are going to be patronizing these businesses after work hours, or on the weekends?

A few, probably. But the real reason that Google wants to urbanize the complex of suburban office buildings that it moved into back in 1999 is to serve the part of its master plan that doesn’t show up on the renderings: the 5,000 units of housing that it wants to build around the Googleplex.

That 5,000 is the magic number for Google — it claims that this is the number of households that are necessary to support a grocery store. It’s also not that many units of housing in light of what the area needs. In 2007, a detailed report developed by The Institute for Metropolitan Studies at San Jose State declared that Silicon Valley would need 90,000 new units of affordable housing over the next 20 years to meet growing demand. In 2011, Mountain View’s own Environmental Impact Review for its new general plan found that building higher and more densely than its current standards of single-family homes and one-story strip malls was sound environmental policy, because Silicon Valley workers would be able to live closer to where they worked.

But in 2012, when Mountain View adopted the plan, it removed permission for 1,100 units of housing near the Googleplex. The Mountain View Voice reported on the meeting that removed the housing allowance:

“Housing by companies went out with the mining towns,” said council member Jac Siegel. “That just went away a long time ago. This is not a university. People need to grow up and they need to go out” of where they work.

Is this true? Is Google’s fancy new campus just a factory town in disguise? And is that such a bad thing? Stay tuned.

Next: Where did the office park come from, anyway?

8 bright ideas for a cleaner future