In part 1, we explore Google’s plan to reinvent the office park.

I used to drive my mom to work, sometimes, to her job at the General Motors Technical Center. To get inside, I had to drive through a dense cordon of trees, then a guard booth, and then an enormous parking lot glittering with cars. Inside, the place looked like your average office complex — just low-slung boxy modernist buildings and flat green lawns. But it was so large that ordinary laws of space-time didn’t seem to apply. If you got lost, you were lost for a long time. When it formally opened, in 1956, LIFE magazine had called the Tech Center “The Versailles of Industry.” To me, it felt like the Area 51 of mom workplaces.

All the offices and factories along the way to my mom’s office were smaller versions of the same thing — set back from the road, behind deep rectangles of rolling green lawn, no sidewalks. Sometimes clusters of begonias added accent marks, or regimented little bushes pruned into spheres or squares. Walking off the path and onto the lawn didn’t usually go well — the land had once been freshwater marsh, and you could sink several inches down into the mud. Even if there was a restaurant just a few buildings down, it easier to just pile into a car and drive there.

I thought about this recently when I went driving through Silicon Valley, because I was surprised at how similar it was to the neighborhoods that I had grown up in. Not that it was an exact replica: The light was different. It had that syrupy, peach-gold light that, before I moved to Northern California, I thought only existed in posters that you bought at the mall. The ground was in no way soggy; many of the lawns had little signs stuck on them claiming that they were fed with recycled water. There were a lot more bicyclists than I had ever seen in Michigan.

But the architecture was the same — the same low-slung buildings, set back from the street by parking lots, each complex its own self-contained bubble, separated from the road by a row of trees. At this point, I had lived in the city, and I’d lived in old factory towns. This two-dimensional sprawl was utterly different from everything that preceded it.

Just where had the office park come from, anyway? 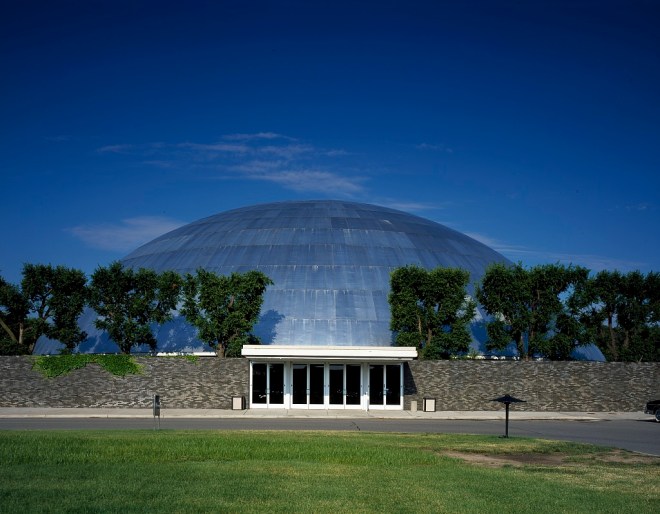 In the olden days, a large company had two options: the downtown office or the factory town. Often, a company had both. The downtown office was close to the bankers and the insurance companies and transit hubs. Handled right, the building itself could make money — the ground floor was rented out to retail, and a company often overbuilt so that it could rent out to other companies.

The factory town was a way to keep employees close by and — often — exercise your own overbearing theories of how people should behave. In the case of companies like Pullman, which ran its own town in the late 19th century in what’s now known as Chicago’s South Side, working for the company meant renting from the company town, and following company town rules, which banned all booze except at the company hotel, where visiting businessmen were permitted to drink it.

Like baby boomers, the office park was a new thing, created out of the hubris, ardor, paranoia, and epic cashflow of World War II. Bell Labs built what was arguably the first office park in 1942, while American involvement in the war was fresh. The company bought up 213 acres of New Jersey countryside and then, when the neighbors freaked out at the idea of a corporation moving into their bucolic landscape, Bell went on a charm offensive.

This was not some regular office complex. This was like an office university. Only the most educated workers would work out there — top executives, and their staffs, maybe a few scientists. The grounds would be designed by the firm founded by Frederick Law Olmsted, the man who landscaped Central Park.

One of the advantages to being out in the countryside was the opportunity to build something that was more like a fortress than a skyscraper — a long driveway leading into a complex would provide ample opportunity for any guards to scope out a potential intruder, as would guard houses at the end of those driveways.

Like many American companies at the time, Bell Labs was working for the war effort — and after that, the Cold War effort. It was a different time. The draft still existed and every man of a certain age either had been in combat, or running support for it. It did not escape many of them that World War II was following some new rules, and those rules involved bombing any cities that had factories in them to rubble, whether or not those cities also happened to have civilians or not.

When the war ended in 1946, America settled into a bifurcated existence — the world where it was a benevolent industrial superpower that gave cars and tractors to the world, and another shadow world where, every evening on late-night television, space rays and aliens and atomic-age monsters trashed the living shit out of the American dream.

In the excellent Pastoral Capitalism: A History of Suburban Corporate Landscapes, Louise Mozingo writes about a land acquisitions expert in suburban Westchester County who describes consulting with 22 corporations interested in moving to the area in the postwar era. Each privately revealed that it was trying to stay away from any potential target areas. In 1942, the architect Eliel Saarinen wrote a master plan for the Detroit metropolitan region, which encouraged the development of suburban business centers because “In the event of future aerial bombardment, such planning would provide a ‘dispersion factor.” Saarinen later went on to plan the General Motors Technical Center — it wasn’t a coincidence that it moved the company’s engineering facilities out of Detroit and into the sleepy suburbs of Warren, Mich. 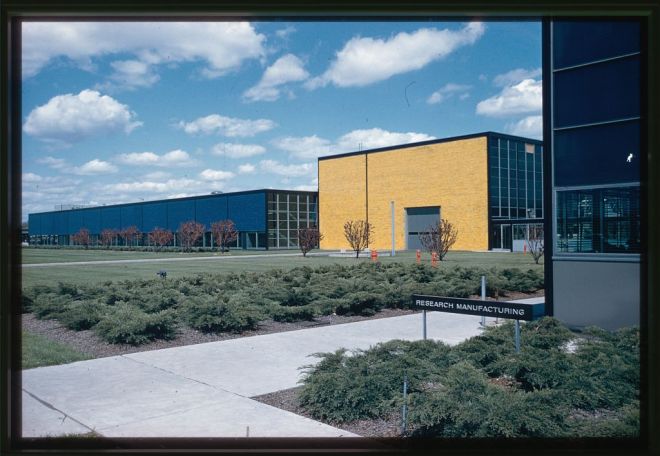 If you could go back in time and tell the 1950s that no major American city would be attacked for decades — and that when one finally was, it would be by some guys hijacking a passenger plane with zip blades — they’d never believe you. Was there not a Soviet Union? Did it not have nuclear warheads, pointed straight at America?

That said, Cold War paranoia wasn’t the only reason that companies left cities for the suburbs. Cities had changed. The great migration of African Americans from the South to anything that wasn’t the South had made northern cities much more diverse than they’d been. Cities were also filling up with refugees from the war — and they were strongholds of union activity. Most of the big companies already had unionized factory workers, and janitors, and sometimes even food workers. But there was one group that hadn’t yet unionized — secretaries and receptionists. Moving those secretaries out to the suburbs would keep them out of the reach of union organizers.

But still, according to Mozingo, the move from the city to the suburbs didn’t come easily. Employees were not thrilled about the increased commute times. That’s where the landscaping came in. The “park” part of the “office park” is what sold the entire concept to everyone from workers to executives to reluctant city councils. Who doesn’t love a park? Who wouldn’t want to work in one?

A successful office park could also make a suburban neighborhood financially sustainable. Suburbs were finding that building at low density didn’t give them enough of a tax base to support things like schools. Mozingo describes the relationship that developed between office parks and residential neighborhoods as a “suburban grand compromise”: “It was based on a clever leveraging of public funding for suburban expansion through mortgage subsidies and infrastructure financing, especially roadways, attraction of new business enterprises compatible with a suburban aesthetic, and restrictions that ensured race and class segregation.”

There were problems, of course. The swooping curved roads and cul-de-sacs that Olmsted designed for Central Park were adopted by many suburbs and office parks, but they had originally been designed for meandering, not for getting to work. They were frustrating as hell when you were just trying to get from here to there. Olmsted knew this — he had made sure to dig tunnels under Central Park to allow cross-town traffic to cut straight through — but designers imitated the most visible aspects of the park.

My mom remembers visiting the General Motors Technical Center as a little girl. “It looked like the future there,” she said. “I mean, the future we had then.” But the complex struggled with its own success. There were so many people working there that the problem of getting them in and out of the center every day had to be mitigated by staggering everyone’s work schedule. One group was told arrive at work at 9 a.m., one at 9:05, one at 9:10, and so forth. A shuttle service drove people from building to building.

When my mom worked there later on as an adult, she could still look out the windows and see trees, as Saarinen had intended, but she couldn’t actually open the windows. The complex was supposed to be able to handle the weather on its own but, practically, things broke down a lot. In the summer, the city would call General Motors and tell them to turn their lights off, so that their air-conditioner use didn’t overload the grid. When the recessions hit and GM’s fortunes waned, it was hard for the company to rent out excess space. Entire buildings were left abandoned. Weeds began growing up through the concrete.

Office park space may not be easy to recycle or reuse, but it happens, particularly in places like Silicon Valley, where too many companies chase too little space. All of the biggest tech companies have nested in space that was abandoned by other ones. Facebook is in the former Sun Microsystems complex in Palo Alto. Google is in the space previously occupied by Silicon Graphics (SGI) in Mountain View. Both companies, along with Apple, which long ago outgrew its two-decade-old headquarters, are now building entirely new complexes — places like the Tech Center, Versailles for their industry. All of the projects feature superstar architects and epic ambitions — these are buildings that are meant to reflect their images, at the peak of their power, to the world, in much the same way that General Motors did 50 years ago.

Facebook is building a 435,000 square foot angular shed thing designed by Frank Gehry. Apple pulverized the old Hewlett-Packard complex and used the dust to make new concrete to build out the frame of an enormous glass donut that can hold 15,000 employees. Google is building a bunch of domes. All of them have numerous environmentally conscious building features like solar panels and recycled water.

Looking over the plans and scale models, though, it’s noteworthy just how … park-like they are. Apple has plans to stock its glass donut with fully grown trees. Google is “re-oaking” the campus. The entire roof of Facebook HQ is a park.

Compared with past waves of office-park construction, the aesthetics are different this time around: a little more native, a lot less controlled and geometric. But the overall impression is the same — that of a fantasy cloister that can survive as a microcosm, detached from a bigger, meaner world. Kind of like Frances Hodgson Burnett’s The Secret Garden if it were written by dudes in hoodies.

Today, though, the Russians aren’t about to bomb us — which leaves us to wonder what these companies are hiding from. What’s the purpose of such splendid isolation?

Next: Mega-office parks without mega-traffic jams? Dream on, Silicon Valley

So Roundup “probably” causes cancer. This means what, exactly?