It is a given among environmentalists and planning professionals that higher density reduces carbon emissions from transportation. Denser communities allow for more walking, biking, and transit use. And even when you drive, a shorter trip burns less fuel. So we can assume that vehicle emissions per capita will drop as a city grows denser, but we’ve known very little about exactly how much — until now.

According to a new study by Boston University environmental scientists, published in the Proceedings of the National Academy of Sciences, climate pollution drops dramatically when very sprawling places become more dense and when already-dense places become denser still, but there’s much less of a pollution drop at the places in between. In the words of Conor Gately, the study’s lead author and a PhD candidate in earth and environmental science at BU, the relationship between density and emissions is “nonlinear.” That’s scientist-speak for a wiggly curve rather than a straight line.

Gately and his coauthors, BU professors Lucy R. Hutyra and Ian Sue Wing, examined the data on transportation emissions and residential density in American cities since 1980. “What we found is that at really low densities you get a lot of improvement in per capita emissions with increasing density, and then it flattens out,” says Gately. “There’s a zone between a few hundred and 1,200 or 1,300 people per kilometer at which emissions decline at a much slower rate than before. And then it speeds up again.”

This makes some sense if you think about the way communities are organized. At super-low densities — imagine a farming or ranching area — everyone needs to drive dozens of miles just to go to a grocery store. Moving from that to a small town, where you have an agglomeration of businesses on a Main Street or in a shopping mall, allows people to drive much shorter distances. “You get the best per capita emissions reductions between total rural landscape and small town with a lot less driving than in, say, rural Montana,” says Gately.

As you move up the density ladder, though, you then reach a sort of plateau at the sprawling low densities at which many suburbs and Sun Belt cities are built. Going from, say, 400 to 800 people per square kilometer still doesn’t change the fact that everyone is driving everywhere. But once you get into higher urban levels of density, doubling the density again can make a huge difference because you reach the level at which people start switching from driving to other ways of getting around. For example, Denver and Detroit both have around 2,000 residents per square kilometer and both have more than twice as much vehicle emissions per capita as cities with around 4,000 residents per square kilometer, such as Boston, Chicago, and Washington, D.C. (All this data is for just the city itself, not the metro area.) Really sprawling cities like Atlanta, Phoenix, and Houston have more than four times as much vehicle emissions per capita as Chicago or D.C. (New York City, of course, has the highest density and lowest transportation emissions.) 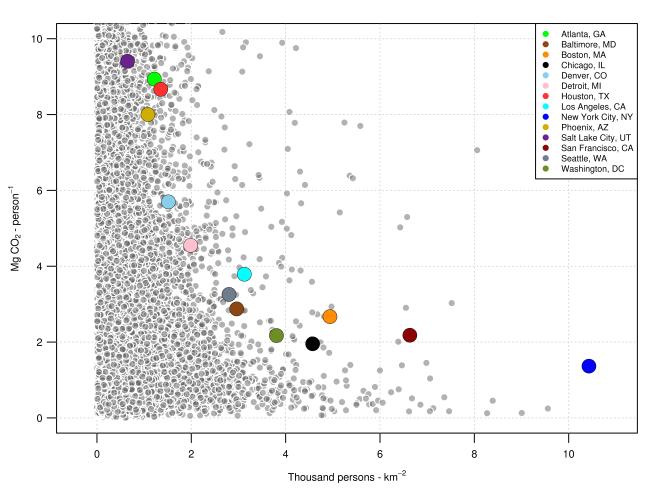 Per capita CO2 emissions from vehicles versus population density for U.S. cities in the year 2010. A selection of major cities are represented by colored dots; all other cities are grey points.

There’s another important finding, one that we already knew but benefit from having a quantitative measurement for: Density alone does not determine transportation emissions. City design and street layout also matter. Los Angeles is surprisingly dense, with more than 3,000 residents per square kilometer. But much of L.A. is designed for cars rather than people. L.A. has higher transportation emissions than more pedestrian-oriented cities of comparable density like Baltimore and Seattle. “L.A. isn’t designed to be walkable and get [Angelenos] into alternate modes of transportation, despite being relatively dense,” says Gately. Another possible problem is excessive segregation of uses. Even relatively dense residential areas sometimes lack interspersed stores that allow for shorter shopping trips to be made on foot.

Gately readily admits that the data he used has limitations. It only measures cars on the road and divides them by the number of residents within the city. But many drivers in cities are coming in from the suburbs, and big freeways going through cities bring through-traffic. So when you look at a growing low-density metro area like Salt Lake City, you arrive at the odd finding that the city proper saw its auto emissions per capita double between 1980 and 2010 while the city’s density hardly changed. That’s because, as CityLab explains, Salt Lake’s suburbs grew and sent more drivers into the city.

That speaks to the monumental challenge of reducing driving. You need not just density in the city, but density in the suburbs, mass transit, and job concentration in the urban core. Otherwise, as Gately notes, “Densifying downtown Salt Lake won’t affect the behavior of people in the suburbs.”

But these behaviors must change if the U.S. is to meet its own goals of massive carbon emissions reductions. As the paper notes, “The United States, with 5% of the world’s population and 30% of the world’s automobiles, emits 45% of global transportation CO2 emissions. Nationally, the on-road sector represented 28% of total fossil fuel CO2 emissions in 2012 and is responsible for almost half of the growth in total US emissions since 1990.”

A price on carbon, like a carbon tax or cap-and-trade program, would help solve these issues by making driving more expensive and creating market demand for denser areas and transportation alternatives. Aggressive action by local and regional governments is needed too, to build up transit, reorient streets, and fix zoning problems. As the data shows, much denser urban communities are what get people out of their cars, so that’s what we need to be developing.