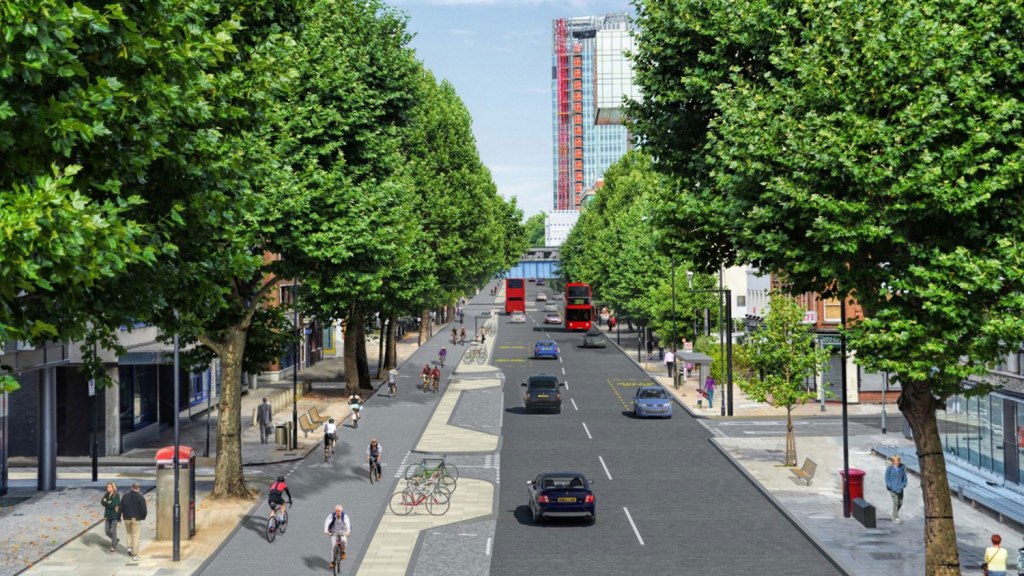 Something seriously newsworthy is happening in London — and no, it has nothing to do with Lady Cora’s affair with that creepy art critic, sorry. Yesterday, London mayor Boris Johnson approved what is said to be Europe’s longest “segregated” bike lane.

Segregated bike lanes — what we here in the states would call “protected” lanes — are anything but unequal. The idea is basically to give motorists and bikers proportionate breathing room. It is designed to offer a safer alternative to auto-dominated roadways after a number of cyclist casualties along city roads in recent years. Here’s De Zeen with a word from London’s transport chief:

“Cycling is clearly now a major transport option in London, with over 170,000 bike journeys now made across central London every single day,” said Peter Hendy, transport commissioner for London. “These projects will help transform cycling in London — making it safer and an option that more and more people can enjoy.”

The lane will extend from east to west London, with another north-south route in the works as well. According to The Guardian, the project is part of a larger citywide initiative for biking that will cost upwards of a billion dollars (£900 million) over the next 10 years, and will stretch approximately 18 miles directly through the center of London. Other segregated bike paths have popped up near London in recent years, but a route of this magnitude in an urban environment is unprecedented. The Guardian‘s bike blogger, Peter Walker, visited other segregated bike lanes to report on their effect on the community:

The effect is humanizing, civilizing, relaxing, enchanting. It makes the city immediately more appealing. Beyond all that it also rebuts the perennial complaint that the push for London bike routes is the niche hobby horse of a small coterie of middle-class, male cyclists. The whole point is that if you create safer cycling you necessarily create more inclusive cycling.

The route will be another step toward declogging London’s roads. Twelve years ago, the city implemented a congestion pricing tool to limit automobiles in certain areas, charging a fee for access. (Other cities, like NYC back in Blomberg’s day, have tried to jump-start similar programs, but most have crashed and burned.)

“Getting more people on their bikes will reduce pressure on the road, bus and rail networks, cut pollution, and improve life for everyone, whether or not they cycle themselves,” Mayor Johnson told London 24.

The proposal is currently awaiting approval from Transport for London, which will hopefully come during a Feb. 4 meeting. If it’s given the green light, construction will get rolling April, and the lane will open spring of 2016. We’d drink (tea) to that.