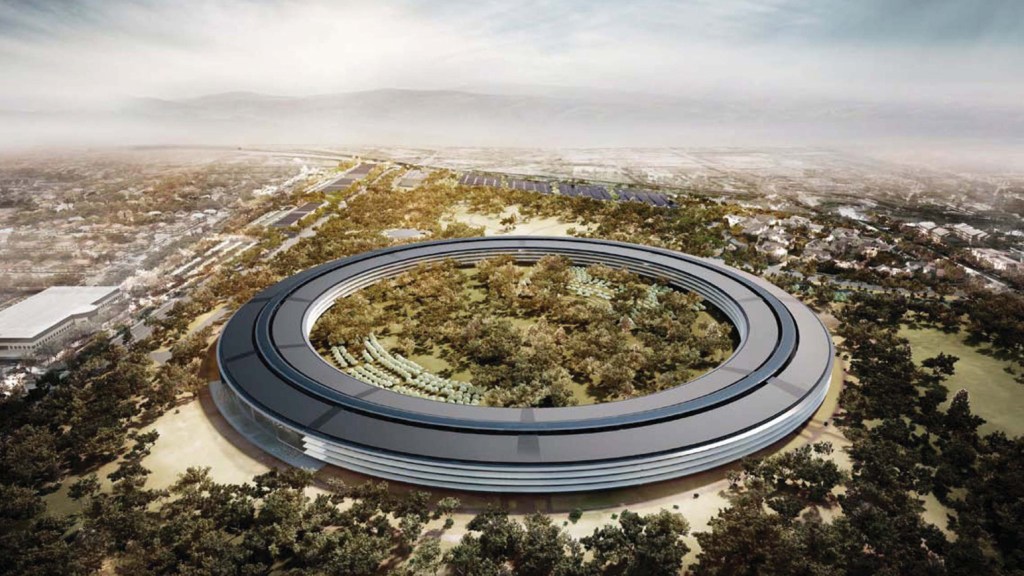 Read part 1, where we look at Google’s plan to reinvent the office park, and part 2, where we explore why all office parks look the same.

A friend who lives just a few blocks away from me in San Francisco’s Mission District used to work for one of the tech companies in Silicon Valley. Each day she would get up and walk to 24th Street and Valencia to join the long line of tech workers that forms there every morning.

The major tech buses use the same stops as the city buses, but the passengers are different. She was used to the city buses, where the crowd skewed very young and very old and more than a little crazy. In the tech bus line, no one looked younger than 20 or older than 40. Almost everyone was male. No one was visibly in the middle of a schizophrenic meltdown. On a city bus, odds were high that someone would be singing “Broken Wings” by Mr. Mister at full volume in the seat behind you. On the tech buses, the only sound was the clicking of laptop keys.

The bus was awesome in that it ferried her back and forth, for free, to a job that paid better than anything she could find in the city. But even when a bus is free, it’s hard to muster prolonged enthusiasm for spending over two hours a day on one. She hated how it would often already be dark by the time she got home. She missed all the things that she used to do between the hours of 5 and 7 p.m. — classes, walks, cooking dinner, meeting up with friends. Eventually, she quit and found a job she could walk to from her apartment. It doesn’t pay as much, she said, but those two hours a day that she spent on the bus are her own again.

Another friend of mine works for a small company on the outskirts of Silicon Valley and makes a similar commute without a company bus. To get to her job, she rides her bike to Caltrain — the commuter rail line that runs between San Francisco and San Jose. She takes the train down to the closest stop to where she works, then rides her bike for about 15 minutes through low-slung office buildings and strip malls until she reaches her office.

Without the bike, the commute would be impossible — while there’s public transit to Caltrain in San Francisco, there’s no such thing in the suburb where her office is located. But the bike also makes her commute worse. So many bike commuters use Caltrain that she gets bumped from the train at least once a week, adding a 30- to 60-minute wait. For this transit experience, she pays over $100 a month. Lately, she’s been ditching the train and commuting by car — adding to the horrendous traffic that leads into and out of Silicon Valley.

The founder of the first tech company in Silicon Valley based his company there because of his own commute issues. William Shockley built his career in Bell Labs in suburban New Jersey, but moved to Mountain View in 1956, and founded Shockley Semiconductor there, so that he could be closer to his mother. Back then, the area grew some of the most delicious fruit out there and was known as “The Valley of Heart’s Delight” — something that is fun to think about when you’re coasting at a gentle 10 mph in bumper-to-bumper traffic in a concrete highway trench, trying to get out of Cupertino.

The painful commute is the flipside to the serene office parks that American companies have been building since the 1940s, and that the economic behemoths of Silicon Valley have kept building for their employees. As the pain piles up, it raises the question: Have we passed peak office park? Google, Apple, Facebook, and their ilk in other regions have a limited set of options: They can keep building suburban corporate Disneylands and set up (or persuade governments to provide) better transit for their workers; they can try to build housing close to their campuses; or they can locate their offices in cities, closer to their workers.

That last option is slowly becoming more popular, even in the office park-mad Bay Area. High-profile new startup successes like Uber, Lyft, and Airbnb are joining relative old-timer Salesforce in downtown San Francisco. Twitter put down its corporate roots in the forlorn mid-Market Street corridor after a bruised-knuckles fight to preserve some hefty tax-break incentives.

In 2012, a few weeks before Twitter moved into its new mid-Market headquarters, it became clear that Twitter was also pulling the transit levers of local government. A new public bus line, the 83x, appeared, which connected the Caltrain Station and Twitter’s new headquarters in a way that would be very convenient for any Twitter employees who were, say, commuting in from the suburbs. It quickly acquired a nickname: the “#Hashtag Express.”

Companies like Uber, Airbnb, and Lyft may threaten to leave the city, but unlike Twitter, they are selling access to transit and lodging, which tend to be located in exactly the kind of dense, urban areas that like to make rules about everything. Leaving the city may never ever be an option for firms in that kind of business, even if they grow to the size where executives start dreaming of campuses.

Meanwhile, Apple, Facebook, Google, and Amazon are doubling down on the old-school office park approach. Apple’s glass donut-in-a-forest is a classic of the genre. General Motors or General Electric could have announced they were building something like it in 1955, the year that Steve Jobs was born, and no one would have batted an eye.

But the other three are doing something else, and plotting out office parks that would make them either the modern equivalent of a company town or the corporate version of a university campus. Facebook is building a 394-unit apartment complex with a sports bar and a daycare center within walking distance of its headquarters, with plans for 3,500 more units — enough to possibly justify reviving traffic along a rail line that cuts through the future campus. Google is trying to get 5,000 units of housing approved for its new headquarters, enough for a quarter of its current employees to live there. While Silicon Valley suburbs have been resolutely anti-apartment and anti-density when it comes to construction, some residents, like former Santa Clara supervisor Ron Diridon, dream of converting the parking lots at the Caltrain stops into high-rise apartment complexes and shopping centers.

When I began writing this article, I realized that I’d never looked closely at Silicon Valley — I had seen it mostly outside of the window of Caltrain. So I borrowed a car and went driving. Up close, Apple was a fortress made out of peach stone and blue glass, right next door to a high-end strip mall, surrounded by an unfathomable amount of parking. Google was a dead ringer for a mid-century, modern university campus — right up to and including the sweeping grass lawns and the highly performative shirtless volleyball game happening in one of the courtyards.

I spied one of the company’s clown-colored campus bikes lying on the grass nearby. I will never understand the kindergarten aesthetic of Google, but I will always understand the possibilities of an abandoned bike. I parked, picked the bike up, threw my bag in the basket, and began pedaling. It was near the end of the day, and there were tech buses everywhere.

The buses seemed a bit more gracious here than they were in my neighborhood — maybe because they thought I was a valuable employee. I pedaled past a line of them. So many buses have started pulling up outside my apartment in San Francisco these days that sometimes I think that everyone in my neighborhood spends at least a third of their life in Mountain View. Here, I could see the buses were going all over the Peninsula: Los Gatos and Sunnyvale and East Palo Alto.

After a few hours of driving around Silicon Valley, Google seemed almost Arcadian. The rest of the state was in a drought; here, everything was green. The hills were gentle and rolling, like the old default desktop for Windows XP. The air smelled good. There was a park looking out over the bay, and a man with a ponytail posing majestically on a hill. Of all the office parks I had ever visited, this was the nicest.

After a while, it was time to go home for dinner. I got into the car.

The next hour was like being gently broiled inside a toaster oven. Myself, 4 million cars, and hundreds of tech buses eased slowly down the interstate, bumper to bumper, at roughly the speed that ketchup slides out of a glass bottle.

Historically, buildings and modes of architecture get abandoned when it becomes too hard to adapt them to new uses. The office park shares many features in common with the kind of building that gets abandoned. For one thing: It’s big — like the big movie palaces (1910 to 1940) or the suburban shopping mall (1946 to 2007) or Detroit’s Packard Plant.

Places also get abandoned when they become impossible to get to, or to get away from. Today’s triumphal Versailles-like tech headquarters could well become the ghost company town of the future — but it’s not a given.

Tech companies could avoid such a fate. All they’d have to do is put a fraction of the energy into building world-class transit across Silicon Valley as they are currently putting into planning and building private transit networks and retro-futurist Bond-villain-meets-ornamental-shrubbery factory compounds. So far, they’ve done a pretty effective job of scaling up the internet so our data doesn’t get hopelessly clogged. Now the physical world — which is known to be less malleable — could use some of the same magic.