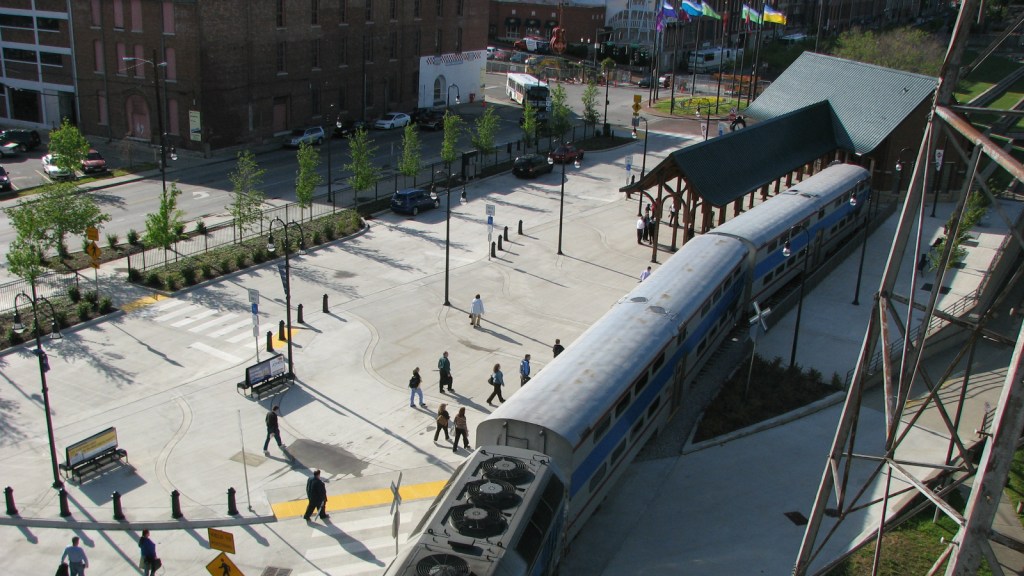 Paul Nicholson
I hear the train a comin'

Nashville: the name brings to mind country music, Tennessee whiskey, country fried steak, and light rail. Well, OK, not yet that last one. The city currently has only one rail line, which provides infrequent service aimed solely at moving commuters between the suburbs and downtown.

But the Nashville public transportation authority has a new $6 billion plan for dramatic expansion. The city’s residents are mostly behind it and so is the business community. The big question: Will Tennessee’s conservative politicians be willing to pay for it?

The transportation authority — referred to as the MTA/RTA as it’s a dual urban and regional transit agency — released its package of recommendations last month under the gratingly twee name nMotion. It proposes building four new light rail lines, creating several bus rapid transit lines on freeways, adding express buses on arterial roads, and introducing bus service on the interstate highways with stops along the shoulder.

The plan emerged from a 15-month-long process. The MTA/RTA consulted with a wide array of city residents and business leaders in meetings and also got over 15,000 public survey responses and more than 3,000 comments. The agency offered up three different plans with varying levels of ambition. Overwhelmingly, Nashvillians chose the biggest, boldest alternative.

One impediment to transit in Nashville is the lack of walkability and bikeability, and the plan would address that too. To take a bus or train somewhere, you have to be able to walk or bike to a station and from a station to your final destination. That’s often impossible on Nashville’s streets, which frequently lack sidewalks and safe crosswalks, especially on the major roads that would be getting new bus and transit service.

“Safety is one of the main reasons people cite for not using the bus, and they mean danger from cars [while one is] walking to or standing at bus stops,” says Nora Kern, executive director of Walk Bike Nashville, an advocacy group. With that in mind, MTA/RTA has integrated pedestrian improvements to over 200 miles of streets into its plan and proposes creating a bike-share program and building bicycle parking at transit stops.

How to pay for it

To assemble funding for any of the big infrastructure investments, such as a new light rail line, MTA/RTA will need to gather contributions from a bunch of different sources. Typically, when a regional public transit authority wants to build something, it applies for federal and state funding, but most of the money comes from the counties that will directly benefit from the new service.

While the city government in Nashville is likely to greet transit expansion with enthusiasm, the more suburban and rural counties that make up the rest of the 14-county Nashville region tend to be more conservative and less supportive of transit. Last year, state senators from the suburbs of Nashville blocked a proposed bus rapid transit route, fearing that losing a lane to buses would worsen traffic for drivers from their districts.

Getting money from the state and federal government requires the backing — or at least non-interference — of the state government, which is dominated by conservative Republicans. Transportation funding in Tennessee comes mainly from the state gas tax, which hasn’t been raised since 1989. There is already a $6 billion backlog of transportation projects in the state. That’s got Gov. Bill Haslam (R) and state legislators thinking about raising the tax, finally, but that’s a tough sell in a conservative state — and there’s no guarantee that any of the new money would go toward public transit. Plus, in addition to the general aversion to taxes and spending, there is much antipathy for transit outside of the major cities.

Good reasons to make it happen

But some hard realities might persuade Tennesseans to cough up some funding for transit.

First, there’s the traffic. A 2014 analysis by the navigation company TomTom found that a typical Nashville-area commuter spends 75 hours per year stuck in traffic.

Then there is the rapidly growing population that keeps making traffic worse. Drawn to the lower cost of living, milder winters, and Southern charm, immigrants are pouring in from the coasts and Midwest. Over the last five years, the Nashville metro region experienced an average of 1.8 percent annual growth, twice the national average.

Many current residents don’t necessarily see themselves taking transit, but they’d like to see new residents take light rail and buses instead of further clogging up the streets. The major roads in and out of Nashville can’t get any wider.

Since many newcomers hail from more transit-rich regions, they might be happy to hop on transit. In fact, growing businesses in Nashville often find that the region’s car dependence harms their efforts to lure top talent from larger cities. “A lot of the people are coming here from places like New York, Boston, Chicago, San Francisco and are like, ‘Where’s the transit? I like the friendly people and the music, but where’s the subway?’” says Steve Bland, CEO of the MTA/RTA.

Because business leaders are concerned about transportation, conservative-leaning constituencies like the local Chamber of Commerce have come out in support of the nMotion plan. “They’re lifelong Nashvillians and they’re no more likely to ride a bus than the Man in the Moon is,” Bland observes. “But, particularly in the creative fields like information technology, they find it a problem for recruiting. [Prospective employees] say, ‘Nashville’s a cool city, but I don’t want to drive everywhere.’”

The business community is also responding to employees who complain of ever-longer commutes, and to concerns that bad traffic could impede shopping and tourism.

“We have the excitement of being a city that people want to visit, move here, work here, start a business here,” says Jennifer Carlat, vice president for policy at the Nashville Area Chamber of Commerce. “We’re drawing new residents every day. That’s great, but it’s putting strain on our infrastructure. We see the economic-development benefits of transit as being significant — not only to facilitate future growth, but to ensure the quality of life for Nashvillians.”

All of this is having an effect on local politicians. State Sen. Jim Tracy, a Republican from the Nashville suburbs who led the anti–bus rapid transit fight in 2015, is playing a more constructive role this year. He’s working with other legislators from both parties to enable public-private partnerships to fund transit projects.

The MTA/RTA is currently accepting public comments on the nMotion plan. Then its board will vote on whether to adopt it. Since the board members already unanimously approved the draft last month, it’s unlikely that they’ll get enough negative comments to change their minds. If the plan does get final approval, the agency will begin to enact the smaller, more affordable improvements while trying to piece together funding for the big projects.

When the state legislature begins its new term next January, it may start debating whether to pay for any of it. It’s still hard to imagine Tennessee, which also needs to pay for other transportation projects and for fixing broken-down roads all over the state, appropriating much for Nashville’s transit plans. But the MTA/RTA is hopeful that Nashville and its neighboring counties might provide most of the money needed.

As state Sen. Jeff Yarbro, a Democrat from Nashville, pointed out earlier this year, “At the end of the day, there’s no Democratic traffic jams or Republican traffic jams.”