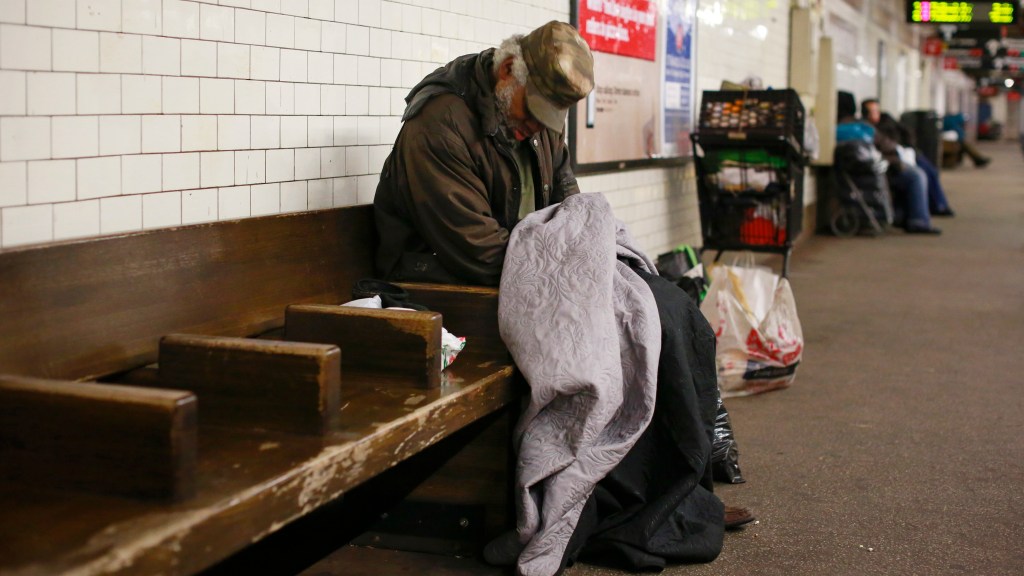 A man sleeps on a seat at the Borough Hall subway station in the Brooklyn borough of New York. REUTERS/Shannon Stapleton
Cities

This morning, as the pope spoke at the United Nations General Assembly in New York, he called for action to help the world’s most marginalized. “Economic and social exclusion is a complete denial of human fraternity and a grave offense against human rights and the environment,” Pope Francis said. “The poorest are those who suffer most from such offenses, for three serious reasons: They are cast off by society, forced to live off what is discarded, and suffer unjustly from the abuse of the environment. They are part of today’s widespread and quietly growing ‘culture of waste.’”

But as Pope Francis calls on world leaders for justice and inclusion to help the poorest, New York City — the venue for today’s speech — has been doing just the opposite.

In the days before Pope Francis landed in New York, the city dismantled homeless encampments near places the pope will be visiting, in essence sweeping homeless people to the side. Along the pope’s route, Gothamist reported that spikes were put up where homeless people often sleep. In East Harlem, 13 blocks away from where the pope will visit Our Lady Queen of Angels School, the NYPD raided and cleared out a homeless encampment that has been home to several dozen people all summer. The Daily Mail reports:

One of the men who lives at the 125th Street camp, on the corner of Park Avenue, fumed to the New York Post: ‘F*** him,’ in reference to the pope.

“He don’t live here. We live here. How can they move me for someone coming here for a couple hours? Just because we are a subculture doesn’t mean we don’t exist.”

Another said: “They just kicked us out. They said, ‘Important people is coming by.'”

“They say if we don’t move, they will give us a ticket or lock us up, and they don’t want to lock us up.”

A woman who also lives at the site told the paper: “They have been coming regularly, but more now that the pope is coming.”

Unashamed, NYPD Commissioner Bill Bratton told Metro New York, “We have 170 world leaders going into the United Nations, so I think it might behoove us to go up and give it a scrub … I make no apologies for cleaning the city up.”

In NYC, the number of homeless people has skyrocketed. One big reason for the increase is budget cuts towards Section 8 — i.e. affordable and public — housing, which began during the Bloomberg administration. In 2014, over the course of a year, 116,000 different people sought refuge in the city’s shelters. According to research done by the Coalition for the Homeless, “Surveys of homeless families have identified the following major immediate, triggering causes of homelessness: eviction; doubled-up or severely overcrowded housing; domestic violence; job loss; and hazardous housing conditions.”

If New York wants to take that pope guy’s words to heart, the city should provide more safe, affordable housing for homeless people — rather than sweeping them to the side.