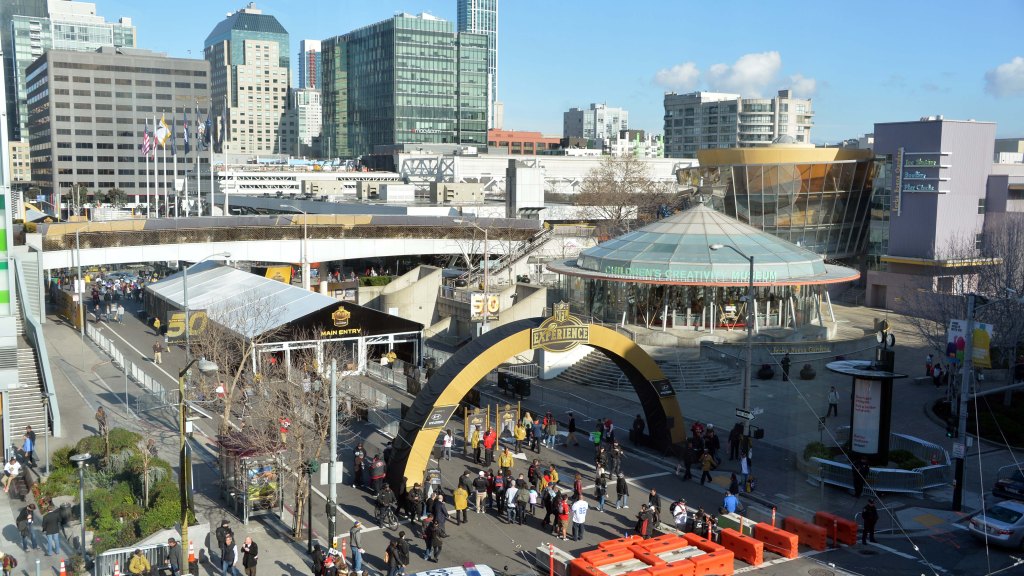 Entrance to the NFL Experience in San Francisco prior to Super Bowl 50 on Feb. 2. Kirby Lee-USA TODAY Sports/REUTERS
Cities

If you’re like me (and unlike legions of overexcited NFL fans), you have not been paying a lot of attention to the Super Bowl. Up until this morning, for example, I thought the game was going to be hosted in San Francisco — since the city is bending over backwards to accommodate it. But nope: The big stadium is in Santa Clara. Taxpayers paid for the thing, but Levi Strauss pitched in some money, so we call it Levi’s Stadium.

Anyway, San Francisco taxpayers are spending nearly $5 million to host all the Super Bowl fanatics who are visiting the Golden Gate City. According to Deadspin, most of that money is being spent on transportation and cops:

At the bottom of this post you can read a report from the San Francisco Board of Supervisors. By the board’s estimate, the Super Bowl will cost San Francisco, the city that isn’t even hosting the game, more than $4.8 million, and most of the money to cover these costs hasn’t been allocated yet. A significant chunk of this bill, about $3.8 million, is because of two agencies: transit (estimated costs up to $2.3 million) and police (estimated costs up to $1.5 million).

The San Francisco Municipal Transportation Agency (SFMTA) issued an email to companies in San Francisco, explaining that getting around is basically going to be a nightmare because of street closures and expected crowds. There’s a free “fan village” called Super Bowl City as well as what’s called the NFL Experience, where you pay $35 to hang out in what looks like a really dingy space. This means that, thanks to all these unnecessary spaces, lines for public transportation are going to get out of hand for everyone, football-lovers or not. Workers in San Francisco were also advised about security perimeters, which I can’t imagine bodes very well for any undocumented workers, even in a sanctuary city.

But that’s not all. In its email, the SFMTA offered some tips, including this:

If you can, modify your work schedule: Work remotely, stagger your work hours, or take that vacation you deserve.

“Take the vacation you deserve”? Huh? San Francisco taxpayers are not only being forced to pay for hosting annoying tourists for an event it’s not even hosting or making money on; its workers are being asked to use their earned time off to accommodate a game that all but ensures brain trauma for its mostly black players and billions for its almost all-white owners.

If workers don’t take that vacation, they can deal with out-of-towners, stand in long lines to get anywhere, and be subjected to security checks. Either way, San Francisco workers lose.