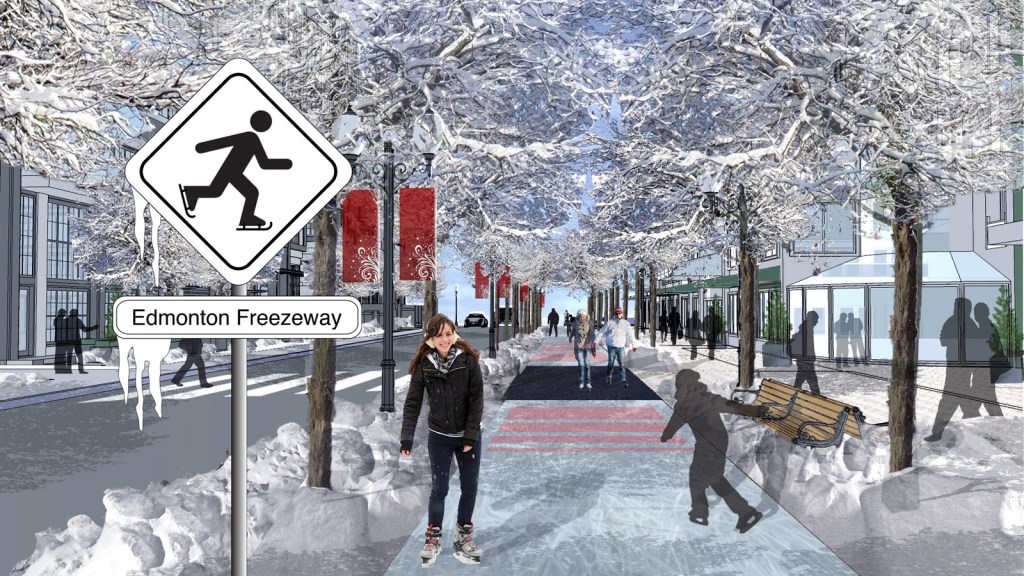 Ever wondered just how far we can take this highway thing? What about, for example, putting in a highway for ice skaters?

If that whole idea seems a little Canadian to you, you are right on the money. Matt Gibbs, a recent graduate of the University of British Columbia in Vancouver, is proposing that the city of Edmonton, Alberta — which has winter temperatures of below zero five months out of the year — flood about seven miles of bike paths around the city during those chill months and turn them into “The Edmonton Freezeway.”

“I wanted to look at the hidden opportunities that exist living in a climate that’s below freezing for more than five months a year,” Gibbs said. He’s “trying to find ways to make people fall in love with winter, as opposed to as if it was some unbearable curse.”

He has a point. I lived in Boston in 2013, during the fifth-largest snowstorm in recorded local snow history, when cars were banned from the roads for 24 hours. The day that I spent walking through the streets and seeing my neighbors go by on skis and sleds was so magical that, when the moratorium ended and cars took over the streets again, it was a total bummer. Why, I thought, couldn’t we ski through Boston every day? The city has plenty of streets. Why not, when it snows, save a few just for slipping and sliding? It would make winter something a little more special than just wading ankle-deep in slush.

Could the Freezeway actually happen? It was originally Gibbs’ master’s thesis project, and like a lot of thesis projects, its major effect appears to have been sending him to design conferences rather than garnering massive political support. The Edmonton Sun described the project as “picking up steam” but didn’t mention any specific plans in the works or upcoming votes on the matter. Creating and maintaining an ice highway smooth enough to skate on is complicated. And even with a dedicated Zamboni to maintain the ice, a Freezeway also seems like a potentially great way to saddle your city with personal injury lawsuits. But then, Canada has a single-payer health system, which means that injured Canadians are less likely to have to sue somebody to pay their medical bills.

And the Freezeway does have some civic origins: The idea of flooding the streets so that skaters could commute to work was proposed (albeit jokingly) by a city councilmember named Tooker Gomberg in the 1990s.  It’s also not as though cities aren’t already notorious for spending money on crazy projects that will distinguish them from other cities and attract tourism — aquariums, museums, shopping malls, historic waterfronts, festivals, musical fountains, fireworks.

Would a Freezeway really be that much more expensive than your average civic attempt to lure in tourism dollars? What’s the cost of a Zamboni and its driver compared to the price of a snowplow and road salting crew?

These questions, and others, are why I earnestly hope Edmonton goes ahead with a feasibility study. If climate change is going to make winters more harsh in some areas, we might as well figure out how to enjoy ourselves.