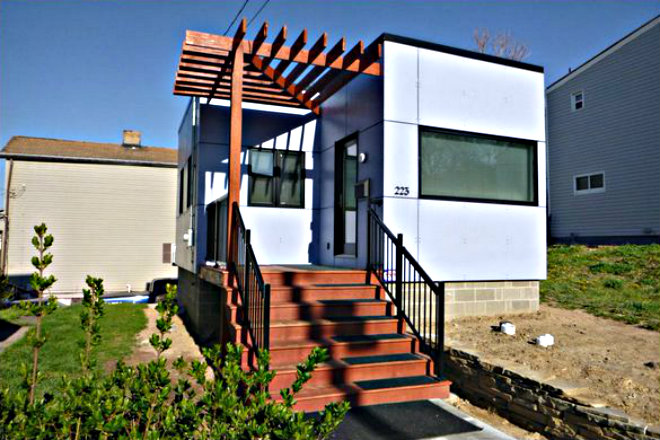 The story starts several years ago, when local urban planner and developer Eve Picker sought to revitalize Garfield, a low-income, predominately African-American neighborhood in the rapidly changing East End of the city. Picker, founder and CEO of non-profit think tank cityLAB, wanted to bring artists into the neighborhood in the hopes of attracting economic development. She called the project 6% Place.

Why? “Six percent is the number, the tipping point,” reads cityLAB’s website. “If a neighborhood can get that many creative workers, it becomes an attraction in its own right, according to a study by CEOs for Cities. cityLAB has been testing out this hypothesis in Garfield, an overlooked neighborhood in Pittsburgh’s East End, since 2011. Our goal is to fill in the neighborhood’s vacancies with creative workers who will be good neighbors, invest in the community, and help the neighborhood grow sustainably.”

One of the 6% Place initiatives was to build a prototype tiny house in Garfield. Tiny homes, cityLAB hoped, would allow local residents to enter the housing market even as the price of real estate in the city increases.

“cityLAB’s goal in both the 6% Place and the Tiny House was always about more than developing any sort of building,” Picker said in an email. “It was about recasting Garfield as a place of opportunity, not one of liability.” Plus, there were plenty of vacant lots to choose from — over 400, according to Picker.

cityLAB constructed one tiny home: a permanent, 330-square-foot structure hooked up to city water and utilities. Construction was finished in early 2016, but the project was plagued by delays and unanticipated expense. Estimated to cost $100,000 — already more than both the typical tiny home and many homes in the neighborhood — the final price tag was almost double that: $190,000. Construction was paid for by grants from the city, as well as corporate gifts and individual donations made through Small Change, a Picker-founded platform that uses crowdfunding to invest in development.

The first tiny home ended up selling for $109,500, the asking price (and well below the building cost). And now, reports City Paper, it’s popped up on Airbnb at least twice before abruptly disappearing. This isn’t just potentially uncouth — Airbnb’s critics claim that it directly contributes to gentrification, increases in rent, and displacement — it could violate the terms of grants cityLAB received from Pittsburgh’s Urban Redevelopment Authority (URA), a city agency that provides funds for economically sustainable development.

“I don’t think the URA would accept this, and could conceivably require the developer, cityLAB, to repay the $49,000 in URA funds that the project received,” Rick Swartz of the Bloomfield-Garfield Corporation, another cityLAB lender, told City Paper. City Paper reports that the house’s owners had indicated that they would occasionally rent the house out to visiting artists.

Picker said that once the tiny home was sold, “cityLAB relinquished any say over its use … Still, as far as we know, the owner does not have the house listed on AirBNB.”

But regardless of whether or not the tiny home is listed on Airbnb, some of its neighbors aren’t happy with the project itself. Matthew Buccholz, who lives a few blocks from the tiny home and first saw the listing on Airbnb, told Grist that few of his neighbors support the project. “It doesn’t send a great message to a neighborhood struggling with gentrification to have public funds spent on this project,” Buchholz says.

It’s clear that while Pittsburgh’s tiny home may have a small footprint, its impact on the neighborhood could be anything but.