Violent cops suffocate the street life they claim to protect 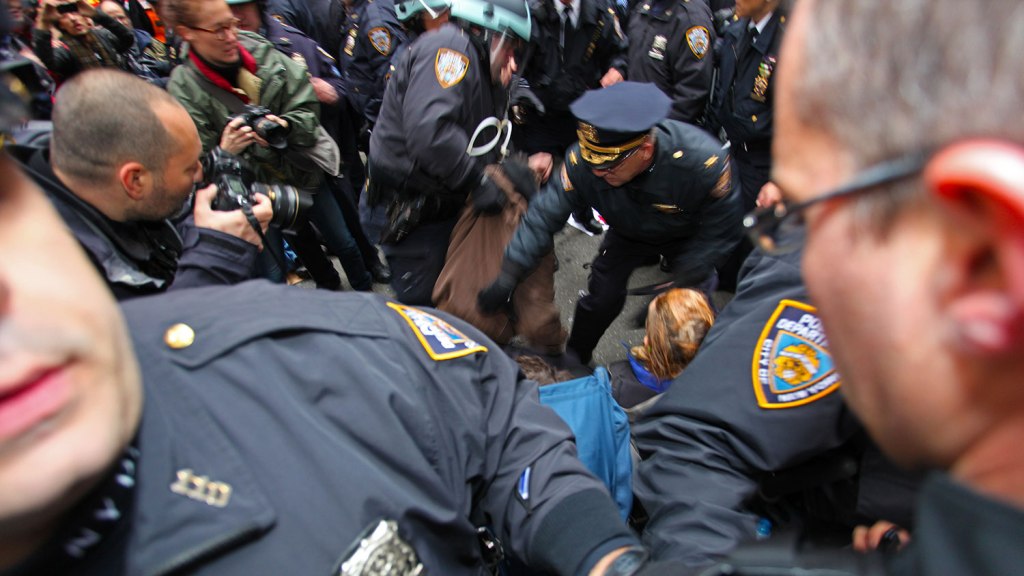 Violent cops suffocate the street life they claim to protect

On Saturday afternoon, Ismaaiyl Brinsley — whose last known address was in Georgia, who had arrest records in Georgia and Ohio, and who earlier that day had shot his ex-girlfriend in Baltimore — murdered two NYPD officers sitting in a patrol car in Bedford-Stuyvesant, Brooklyn, before killing himself. Brinsley had suggested on social media that he was seeking retribution for the murders of Michael Brown of Ferguson, Mo., and Eric Garner of Staten Island, N.Y., at the hands of police.

The police were eager to pin the blame on protesters who have rallied against police brutality — and on New York City Mayor Bill de Blasio, who has spoken in support of the protesters’ freedom of speech. But in railing against protesters, the cops misjudged this political moment, and showed us that they are blind to the challenges U.S. cities face in rebuilding urban street life.

Here is how Patrick Lynch, head of the Patrolmen’s Benevolent Association, the largest union of NYPD officers, responded on Saturday from outside the hospital where the slain officers were taken: “There’s blood on many hands tonight — those that incited violence on the street under the guise of protests, that tried to tear down what New York City police officers did every day. That blood on the hands starts on the steps of City Hall, in the office of the mayor.” When Mayor Bill de Blasio showed up at the hospital, cops there turned their backs on him.

The Sergeants Benevolent Association said this in a series of tweets: “The blood of 2 executed police officers is on the hands of Mayor de Blasio … This is a result of a failure of leadership & an atmosphere of enabling the nay-sayers to become the majority voice. The end result now is 2 dead Police Officers. The silent majority has allowed the naysayers to continue with this rampant anti-cop rhetoric.”

What’s especially audacious about the police unions’ extreme reaction is that Garner’s death was hardly an isolated incident. In just the last few months, other videos have shown NYPD officers taking a man’s money in a playground and pepper spraying him and his sister when they ask for it back; violently attacking street fair merchants for not dispersing quickly; and punching a teenage robbery suspect who was already being restrained. Last month, an officer in a Brooklyn housing project was patrolling the stairwell with his gun drawn when he shot an unarmed, innocent resident and killed him. (The officer says it was an accident.) An audio recording from 2011 released in 2012 famously captured a Latino teenager being searched and verbally abused by cops for literally just walking down the street.

Police imperiousness is sadly not unique to New York. In Cleveland, Browns Wide Receiver Andrew Hawkins wore a T-shirt calling for justice for a 12-year-old boy who was shot to death by police for having a toy gun in his waistband, and a 22-year-old man who was killed by police in a Walmart near Dayton, Ohio, for carrying a pellet gun he had picked up in the store itself. Cleveland police union chief Jerry Follmer demanded an apology from Hawkins. When asked by MSNBC about the fears of parents that their own children might be shot by police, Follmer responded, “How about this: Listen to police officers’ commands … I think that eliminates a lot of problems … I think the nation needs to realize that when we tell you to do something, do it.”

LAPD officer Sunil Dutta complained in the Washington Post of having to endure “outright challenges to my authority.” A policeman’s authority challenged? By a mere civilian? God forbid! Who do these anarchists think they are, taxpaying citizens of a representative democracy? Don’t they know the police are their lords and they are mere subjects? Dutta’s advice to them: “If you don’t want to get shot, tased, pepper-sprayed, struck with a baton, or thrown to the ground, just do what I tell you.”

The notion that the police should be immune from criticism, even when they kill unarmed civilians, is anti-democratic. In our system of government, police serve the public via their elected officials. Just like the protesters from Manhattan to Ferguson, Mayor de Blasio has the right to criticize the police. Indeed, he has the obligation to do so, and to lead them toward better behavior — behavior that will make the city safer, and more attractive, to everyone.

It is an observation as old as Jane Jacobs’s The Death and Life of Great American Cities that “eyes on the street” keep it safe. In 1961, Jacobs observed how the watchful eyes of elderly stoop-sitters, idle shopkeepers, and other neighborhood busybodies kept her neighborhood in New York’s West Village safe for children and other vulnerable pedestrians.

America was undergoing a radical transformation at the time, thanks to the automobile, air conditioning, television, the federal highway program, cheap government-subsidized mortgages, and the resulting suburban sprawl. People were staying indoors or in their cars, city streets were being abandoned, and crime was beginning its 30-year rise. Cops in that era were often focused on reaction — on reducing response times to 911 calls — rather than proactive community policing.

“Broken Windows,” the theory of aggressively policing minor crimes to restore a sense of order to the streets, has been rightly criticized for falling disproportionately on the African-American and Latino communities. But in this regard Broken Windows was right: How public spaces feel matters. A vibe of harmony versus chaos, or liveliness rather than abandonment, will affect whether people want to live in a city or enjoy living in it. And just as city streets were long caught in a negative spiral of crime, fear, and flight, the inverse can be self-reinforcing. More active streets are safer, they feel livelier, and they attract more people. So if America is to restore its cities, expand its urban population, and enhance walkable urbanism, people must feel safe on streets, in parks, and on mass transit systems.

Decades of high crime rates led to intrusive policing that may have helped in the dramatic crime reduction cities have enjoyed over the last two decades. But for some Americans — especially many young black and Latino men — their primary fear of being out in public now comes from the police. It is not a total coincidence that Michael Brown of Ferguson, Mo., was stopped by a cop for walking in the street. As Grist’s justice editor, Brentin Mock, noted, before the rise of cars, the streets belonged to the people.

The vituperative reaction of New York City’s police unions to Saturday’s tragic shooting of two NYPD officers demonstrates an unwillingness to even hear, much less address, those concerns.

In fact, de Blasio’s policies have not sided with anyone against the cops. In a move that disappointed many of his liberal supporters, de Blasio appointed Bill Bratton as New York’s police commissioner. Bratton is an originator of the Broken Windows approach who first helmed the NYPD under Mayor Rudy Giuliani.

The SBA’s invocation of “the silent majority” is telling. The term was coined by Richard Nixon to marginalize anti-war protesters. Nixon’s lasting political achievement was moving many middle and working class whites — angry at black civil rights activists, urban rioters, and longhaired hippies — into the Republican Party. A strategy of appealing to those same “law and order” voters put Giuliani in New York’s City Hall 20 years ago.

But this is not the New York of the Giuliani days. The white bastions of deep Brooklyn, Queens, and Staten Island have seen steady out-migration to the suburbs, with their populations being replaced by immigrants from the Caribbean, Latin America, and Asia. Meanwhile, young liberal professionals cram into Manhattan and interior Brooklyn and Queens. They have no memory of the bad old days of high crime that reactionaries like Republican mayoral nominee Joe Lhota have invoked. The city’s population has become less white, and the whites more liberal.

In deference to the cops’ hysteria, de Blasio suggested Monday that all protests against police brutality should be put on hold until after the slain officers’ funerals. But if, after taking a pause, de Blasio confronts the police unions’ despicable leadership, the coalition of racial minorities and white liberals that elected him will support him. Cops must treat the people they encounter — the man standing on the corner, maybe hustling loosies, the kid walking home from school with the sagging pants, the people hanging out in the playground — with respect. Otherwise, the police threaten to chase away the pedestrian vitality that gives cities their spirit.