How to win at last-minute holiday shopping (hint: buy vintage) 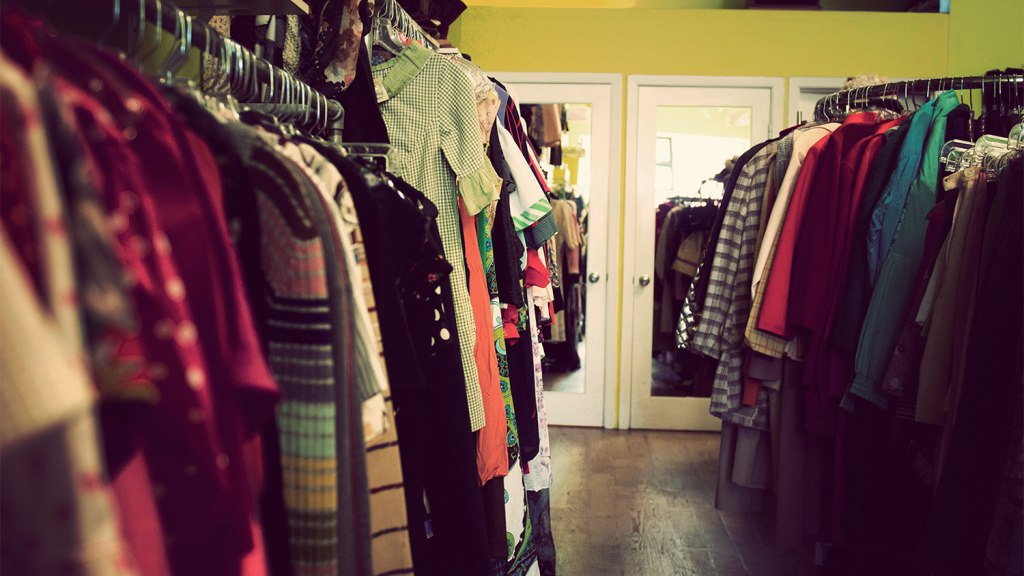 Ashton
OLD IS THE NEW BLACK

How to win at last-minute holiday shopping (hint: buy vintage)

At Grist, we’re all about making the holidays less commercial. Over the last couple weeks, our assistant art director Amelia Bates has illustrated 12 days of DIY gifts, teaching us how to home-make everything from lip balm to bourbon balls for our special someones.

You know, because the effort you spend making gifts is more meaningful than the present itself. Good times spent together are better than cheap plastic stuff. Yadda yadda.

Sometimes, though, hyper-consumerist material culture gets in the way. We need a tangible thing to buy for someone, because that’s what “normal” people do and we don’t want to be weird to this person. And we’re running out of time. Today might be a little too late to get started on a crafts project — even an easy one like wrapping wires in thread to make tangle-free headphones. So, we need to go (gasp) holiday shopping.

Don’t fret, though! There’s a better way to shop. Buy used! Or, as I like to call it, brand-used.

As we’ve written before, buying vintage clothing is an excellent, and fun, way for the style-minded to reduce their carbon footprint. Producing new ugly sweaters stresses life and the climate. Buying used ugly sweaters helps get more out of what’s already made. And smart fashion folks are making sure you’ll always find some rad vintage wears.

So, how big of a difference does buying used clothing really make? According to some back-of-the-Christmas-card-envelope calculations, a more vintage-driven economy could make a big difference.

In 2013, Americans spent $360 billion on new clothing and footwear, according to the Bureau of Economic Analysis. What if that number went down by, say, 1 percent this year? Meaning $3.6 billion worth of new clothes purchases were swapped out for used. (Only purchases of new stuff count in these standard economic accounts.)

According to economic input-output life-cycle assessment, a tool created by  Carnegie Mellon University researchers using a model of the U.S. economy and its interactions with the environment, here’s what not creating $3.6 billion worth of new apparel would yield:

Now, this math is quick and dirty and relies on plenty of assumptions that we can debate in the comments section or on social medias. The point is that a healthy reuse economy — an awesome-yet-underappreciated sector — can help slow down the wrecking of the environment.

You may also be wondering: Is there really enough brand-used clothing lying around to take on this sort of demand increase?

Yep. More than enough, in fact. This awesome Collectors Weekly article from May reveals Americans discard so much clothing that even big used retailers like Goodwill can only display a fraction of the donations they receive. And that’s with 85 percent of old clothes going to the landfill — 70 pounds per person per year (!) — according to an EPA waste study.

So run out to that eclectic consignment store or mom-n-pop thrift shop in your community — probably the one no one’s ever heard of, that smells a little funky. We also like shopping at donation-secondhand chains with worthy missions and responsible protocols for reselling and recycling our stuff, like Goodwill, which trains and employs youth, veterans, seniors, criminals, people with disabilities, and others who may not be considered employable elsewhere.

Or, skip the store altogether. You can buy handmade and vintage stuff at Etsy, which sells gift cards to save your procrastinating ass. Use the good ol’ local Craigslist to deal or procure, well, anything in your area. There probably won’t be any flea markets or garage sales on Christmas Eve, but keep those options in mind for next year — or next time you’re looking to update the ‘drobe.

‘Cause the spirit of the holidays is all about giving, right? Riiiiight?