Long after the athletes have packed up their Speedos and the torch has gone out, the structures that house the 2016 Olympics will remain. While Rio de Janeiro used its existing national soccer stadium for the opening and closing ceremonies, it also built a number of other stadiums and venues for the games — and displaced 80,000 residents in the process. So what’s to come of all those buildings once everyone has taken their balls and gone home?

The Rio games were billed as a model for sustainability, but they failed in many respects — from polluted waterways to nightmarish congestion to the construction of a golf course on a nature preserve. But one of the more important indicators of an event’s sustainability is what happens to the infrastructure after the games are over — and on that front, Rio has ambitious plans.

Future Arena, the handball venue, will be taken apart and the pieces used to build four schools around the city, each serving 500 students. Architect Manuel Nogueira said the Future Arena was built with “nomadic architecture,” designed to be easily dismantled, transported, and rebuilt. “The way everything gets moved from place to another is a bit like Lego,” Nogueira told CityLab.

In addition to Future Arena, the city will turn the aquatics stadium into two community swimming centers; the media center will become a high school dorm; and the 300 acres of land on which Barra Olympic Park currently sits will go be turned over for public parks and  private development. Repurposing venues like this can be good for both people and the planet: According to architect Jeff Keas, who has worked on seven Olympic games, temporary buildings have half the carbon footprint of conventional buildings, and can cost up to 80 percent less.

That’s assuming, of course, that everything goes to plan. Other cities have tried to repurpose Olympic venues without much luck. The iconic Bird’s Nest stadium in Beijing, for instance, was supposed to house China’s leading soccer club after the 2008 games, but the team later backed out amid reports that they were embarrassed to play in an arena built for 91,000 when they averaged 10,000 spectators per game. Now, Bird’s Nest sits empty but for visiting tourists — and still costs $11 million a year to maintain. 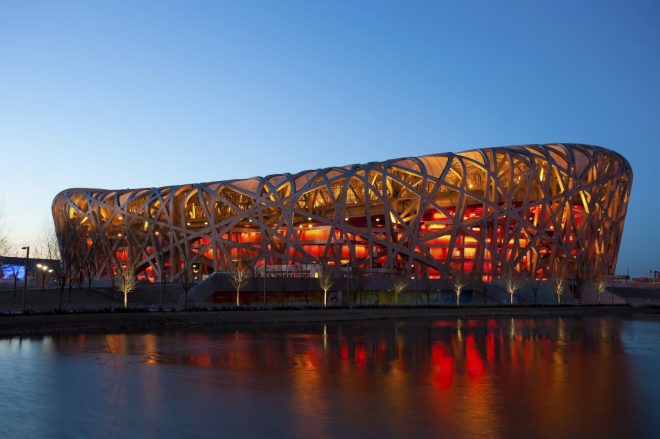 The Beijing National Stadium, or the Bird’s Nest, was home of the 2008 Beijing Olympics. iStockphoto

London, too, has run into trouble with its retired venues. While an aquatic center, a velo dome, and a handball arena left over from 2012 are all open to the public, there has been controversy over the redevelopment of Queen Elizabeth Olympic Park, home of the Olympic Village and several sporting venues during the games.

The park is located in London’s East End, a historically low-income area burdened by tracts of toxic land from centuries of exposure to industrial waste. The city (and taxpayers) cleaned up the land for the Olympics, and the plan was for the park to be redeveloped with an emphasis on affordable housing. Instead, London’s erstwhile mayor and Brexiteer Boris Johnson announced in 2014 that available housing would be reduced in favor of more commercial development. Now that the land was detoxified for the games, the East End is rapidly gentrifying and lower income residents are being pushed out.

Elsewhere, former Olympic venues have simply been left to rot. Hitler’s Olympic Village in Berlin housed a hospital for German soldiers during World War II, but today, it’s a ruin. The same is true of former venues in Turin, Sarajevo, Athens, Munich, and beyond. You can visit these sites — maybe stand on abandoned podiums and run on Olympic tracks — but that’s about all you can do.

Perhaps Rio will not meet such a fortune. But even if the city’s arenas are successfully repurposed, the new buildings are not likely to bring solace to the 80,000 residents — most of them poor — who lost their homes to the Olympics. The games may be a two-week-long show for the rest of us, but for the displaced, the disruption they cause could last a lifetime. A new pool to swim in won’t change that.

Want to know more about the effect that Olympic infrastructure has on cities? Watch our video: