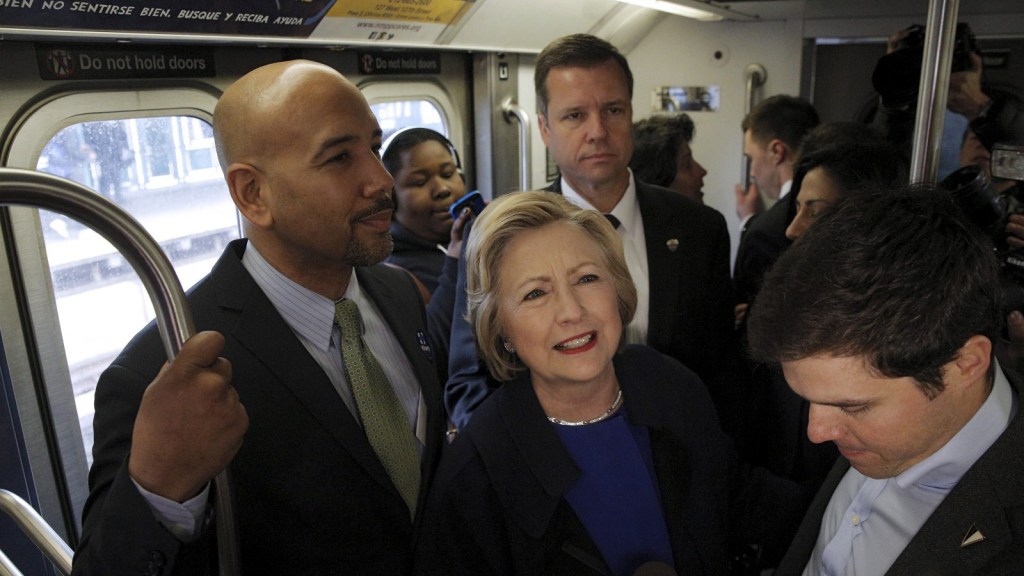 If you run for president, you have to demonstrate fluency in local culture on the campaign trail: loving NASCAR in South Carolina, enduring extreme cold in New Hampshire, consuming corn dogs for the cameras at the Iowa State Fair. This year, with competitive races stretching longer into primary season than usual, even New York got in on the act. And in some ways, there’s nothing more authentically New York than riding the subway — and getting criticized for doing it wrong.

Accordingly, the local media were delighted when Hillary Clinton had trouble swiping her MetroCard (even though the most experienced subway riders often have to swipe the cards more than once) and noted that she might have broken a rarely enforced law against campaigning on subway cars. Sanders might not even have made it that far. When asked by the New York Daily News editorial board how one rides the subway, he replied, “You get a token and you get in,” which hasn’t been true since 2003.

All this makes for fun tabloid headlines, but does anyone really think Sanders or Clinton would be remotely unqualified to run the federal bureaucracy or negotiate with Russia because they don’t know how to ride the subway?

What’s most disconcerting about all this is the fact that using mass transit is treated as a New York-specific novelty. It’s a sad statement on America’s failed transportation system and policies. Driving is so incredibly dominant that it is presumed as the norm everywhere other than New York City. When presidential candidates go to Iowa, do they ever have to prove their prowess behind the wheel of a car? Of course not. That would make no sense, because driving isn’t an Iowa-specific tradition. It’s just how people get around in America.

As a group of urban planning professors noted in The Washington Post in 2014, “Transit … accounts for 2 percent to 3 percent of all U.S. passenger trips and 2 percent to 3 percent of all U.S. passenger miles.” Total trips made by transit in the U.S. are touted for having reached their greatest number since 1956. That’s misleading, though: The American population has doubled since 1956, meaning ridership per capita is still half what it was 60 years ago. Moreover, 1956 ridership was well below ridership in the 1940s, which was lower than the 1930s, and so on, back to about 1920. Transit use went straight down as cars became more widespread. It bottomed out around 1970 and has stayed there.

The supposed uptick in recent years is largely a myth. It’s mostly the product of population growth. As Wendell Cox notes in the New Geography, “Destinations within the six transit ‘legacy cities,’ (not metropolitan areas) of New York, Chicago, Philadelphia, San Francisco, Boston, and Washington account for most of the nation’s transit work trips.” And almost all the new trips taken in recent years have been in and around New York.

There are a lot of factors at work here, but one of them is just plain neglect. As John Raskin, executive director of the Riders Alliance, an organization of New York City subway and bus riders, noted in a Daily News op-ed after Clinton and Sanders came to town, subways everywhere suffer from a lack of funding. The poor service resulting from our abandonment of our public infrastructure makes people not to want to use transit: It’s seen as too dirty, too unreliable, even sometimes unsafe.

Investing in transit is one step our next president could take that would actually have an impact, and would matter a whole lot more than whether they swipe their MetroCard correctly — or remember that MetroCards exist at all. Both Clinton and Sanders have said they’ll invest in expanded mass transit, but paying for it would require a new source of funding, unlikely in the tax and spending-averse Republican Congress. With meaningful mass-transit policies and budgets in place in all our cities, America can turn into a country where riding subways is seen as no more of a local curiosity than pulling into a parking lot. Then candidates can pander to New Yorkers properly, by showing that they know how to order a plain slice or a bagel with a shmear.