Urban waterways are usually the worst; just picture any inner-city harbor, anywhere, and you’ll see what I mean. But maybe they don’t have to be! Wetlands are nature’s oldest tech for cleaning up bodies of water — and there is way to get some wetlands back into our city waterways. 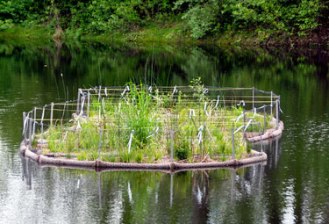 The concept is fairly simple: Install a floating platform somewhere in your body of water, with room for plants and animals to move in … and wait to reap the clean-water benefits! The plants will feed on nitrogen pollution in the water, starving algal blooms and pumping the waters full of oxygen instead.

They also can help soften the “edges” where city runs up against country, adjusting to changes in water level, providing shelter for native plants, fish, birds, and other animals. In Hanwell, a small town just outside of London, locals revamped an urban stream in just this way — these wetlands started out as a series of floating platforms tethered to the concrete wall edging the stream, but native plants soon colonized the new turf, and now the river banks looks like a lush natural slope. As CityLab reports:

Within a year of installing the system, the riverbank has been utterly transformed, the diversity of plant species has gone from three to 30, and dragonfly larvae — a good indicator of water cleanliness — are in abundance.

River Brent before and after.Biomatrix Water

The company responsible for this particular instance of island magic is called Biomatrix Water, and it’s spreading the wetland gospel, along with a few other enterprising companies. Last fall, a few floating islands were installed in a lake outside of Seattle; Baltimore’s Inner Harbor got its own archipelago this past spring.

Floating islands: Coming soon to a disgusting body of water near you.

Farming in the face of climate change? Monsanto has an app for that