25 years after Exxon Valdez, oil spills ain't what they used to be 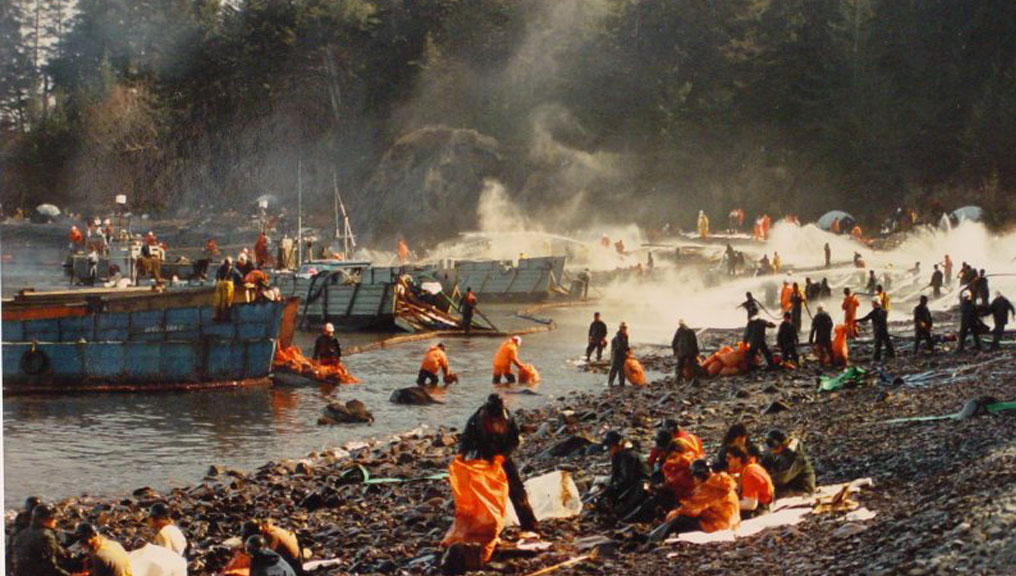 25 years after Exxon Valdez, oil spills ain’t what they used to be

As I’m sure you’ve noticed, if you are the sort of person who likes to relax on the weekend by reading about past environmental catastrophes, this Monday is the 25th anniversary of the Exxon Valdez oil spill.

Happy anniversary, Exxon Valdez oil spill! If we were married, we would give you silver. But we’re not married, except in that way we all are inextricably bound together in a global web of shared ecology. In which case you probably wouldn’t want silver anyway, because of the downstream effects, so let’s just keep it at congratulations.

So: 25 years after Capt. Joseph J. Hazelwood downed several vodkas and left the Valdez poised to strike Prince William Sound’s Bligh Reef at four minutes after midnight, what is the spill’s environmental legacy?

Money, mostly. There were some changes in safety measures — ships that carry oil to the United States need to have double rather than single hulls these days. Some have argued that this is unfair — that the real issue at play is how drunk the person piloting the tanker is, rather than how many hulls the tanker has. But it is true that because of the Valdez, single-hulled tankers are now banned from U.S. ports, though they still deliver crude to other countries. The Valdez itself was actually repaired and was delivering crude to east Asia as recently as five years ago. The otters of Valdez have recovered, reportedly. The herring — or rather, their tiny hearts — seem to be having a harder time of it. The spill also may have been a tipping factor in keeping Congress from approving drilling in the Alaskan National Wildlife Refuge.

But the main legacy that environmentalists produced in the wake of the Exxon Valdez was 1990’s Oil Pollution Act. The act set up a structure for oil spill response (mostly, local fishermen trained to respond to oil spills by using air quality equipment, booms, and skimmers) and an Oil Spill Liability Trust Fund, which can provide up to $1 billion worth of cleanup for any “oil liability incident.”

The trust fund is financed by a tax on crude, and this is where it gets interesting. The tax applies to the kind of crude that spilled out of the Valdez, but not the kind that makes up your modern, red-blooded American oil spill. Dilbit — the heavy, solvent-laced tar sands crude that oozed into the Kalamazoo River in 2010 and across Mayflower, Ark., in 2013 doesn’t count, technically, as “oil.”

The trust fund has been dipped into to cover these cleanups, but the kind of oil that caused them was never taxed to begin with, meaning that the fund is likely to run short in the future, if tar-sands crude — which was just a small player in the oil game when the Valdez hit that reef — isn’t folded into the current definition of what “oil” is.

Another legacy of the Oil Pollution Act was that oil spill response training isn’t evenly distributed. The fishermen of Cordova, Alaska, may be well-trained to respond to another spill like the Valdez. But the domestic oil boom in America and Canada since the Valdez spill suggest that the largest environmental risks will be occurring along the routes where crude is transported inland — through pipelines, along freight lines, and on boats moving across the Great Lakes, particularly Lake Superior.

Tom Crane, the deputy director of the Great Lakes Commission, an alliance of eight states and two Canadian provinces that seeks to mitigate any risks to the water quality of the Great Lakes, recently told the investigative nonprofit Wisconsin Watch that oil-spill response funding is underfunded in the area. The last EPA conference for freshwater spills, scheduled for 2012, was cancelled, and funding for equipment and training is also minimal.

A report published this summer by the U.S. Coast Guard’s research and development division was remarkably blunt about the agency’s lack of knowledge in dealing with underwater spills, especially spills involving the heavy crude that is coming from tar-sands extraction. It sinks, and no spill response team is entirely sure how to deal with that — booms and dispersants don’t work well.

“Current methods,” the report reads, “are inadequate to find and recover submerged oil, with responders having to reinvent the techniques on each occasion.” Regional Response Team 5, which is responsible for spills in Wisconsin, Indiana, Illinois, Michigan, Minnesota, and Ohio, has never done any exercises involving submerged oil.

A lot has changed in 25 years. For decades following the spill, America tried to mitigate its oil risk in ways that made for fewer spills domestically, but arguably, just pushed the risks overseas. Exxon called it quits on sponsoring a ride at DisneyWorld. And today we produce crude — a lot — instead of just importing it. If America is serious about producing its own oil, instead of importing it, then it’s also going to have to change its idea of what an oil spill looks like, and prepare for that new reality.