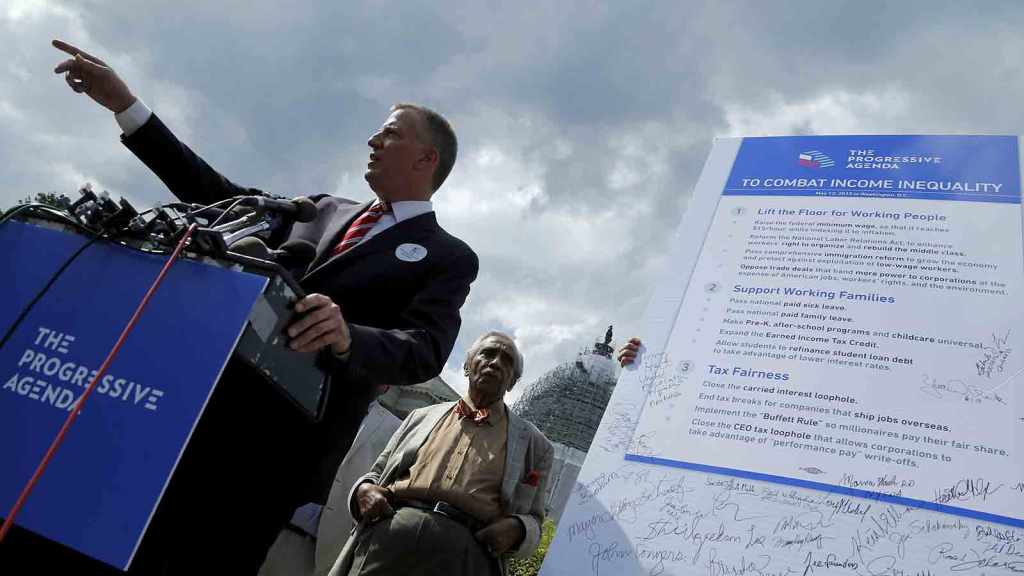 At a rally in front of the Capitol in Washington, D.C., on Tuesday, New York City Mayor Bill de Blasio and fellow liberal Democrats such as Rep. Barbara Lee of California unveiled a national agenda for greater economic equality. The 13-point “Progressive Agenda,” which was heavily influenced by Nobel-winning economist Joseph Stiglitz’s new 100-page report for the Roosevelt Institute on policy solutions to income inequality, is a left-wing wish list meant to echo Newt Gingrich’s 1994 Contract with America.

“The Progressive Agenda” includes plenty of popular, and populist, ideas, from raising the minimum wage to mandating paid employee sick leave. The emphasis is on correcting a system that has been rigged for the benefit of corporations and the wealthy, particularly through the tax code, and replacing it with a fairer system that rewards labor rather than just wealth. The agenda would do a lot to help the U.S. catch up to the policies of other developed countries that have more equitable income and wealth distributions.

Notably absent, though, is practically anything to do with the fossil fuel economy, suburban sprawl, and the policies that prop them up, which are bad for both regular Americans and the climate. De Blasio’s agenda contains a token reference to environmental protection, along with labor rights, as something that shouldn’t be sacrificed to global trade deals. Stiglitz makes brief mention of a carbon tax. But many sources of inequality related to the dirty energy economy — and sources of opportunity that arise from a shift to a clean economy — go unmentioned.

Still, just because these concerns weren’t out front on Tuesday doesn’t mean they’ll be neglected. De Blasio’s climate plan for New York City, unveiled last month, is heavily focused on addressing poverty, so he certainly understands how the issues are linked. And a source with knowledge of de Blasio’s plans said that more Progressive Agendas will be forthcoming and they will address other aspects of economic inequality, possibly including environmental issues.

To help progressive leaders develop such a plan, here’s a list of six policies that would help cut carbon pollution, clean up the air, strengthen our cities, and redistribute tax dollars from fossil fuel companies and rich individuals to the poor and middle class.

As mayor of the nation’s biggest city, a coastal metropolis that faces some of the worst threats from climate change, de Blasio should use his national profile to promote climate action as much as anything else. That isn’t a distraction from his commitment to reducing inequality; it can be a core part of it.