It’s no secret that Africa is vulnerable to climate change. After all, regions within the continent are already familiar with devastating droughts and severe floods, and climate change will only make extreme weather worse. Now, according to a recent poll from the Pew Research Center, 59 percent of Africans surveyed name global climate change as their top concern. Just take a look at the charts, via Quartz, below: 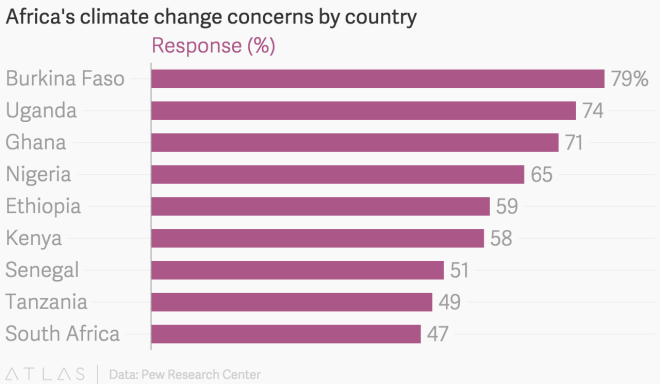 For comparison, in the United States, 68 percent of those surveyed were most worried about ISIS while only 42 percent prioritized climate change as their top concern, Pew Research Center reports.

Considering the dramatic effects climate change could have on the continent, it’s really no surprise so many people in Africa are worried, Quartz says:

Decreased rainfall and general weather unpredictability could mean that by 2020, agricultural yields for some [African] countries could decrease by up to 50%. By the middle of this century, predictions are that average temperatures will jump by 1.5°C to 3°C, with the trend going up. (This warming will be larger than the global annual mean.) And by 2080, the amount of arid and semi-arid land on the continent is projected to increase (pdf) by between 5% and 8%.

So although African nations are some of those least responsible for climate change, they are much more likely to feel — and lose sleep over — the effects.