Before his world was thrown into turmoil, Fasil Tekola lived a comfortable life in Ethiopia’s capitol city, Addis Ababa. Born into a wealthy family, his father a colonel, he was one of only a few kids who drove their own cars to school. But his family also had a strong connection to the land: They owned farmland along the Awash River, a few hours south of the city. Tekola remembers his parents planting eucalyptus trees around Addis Ababa because the trees had been cut down.

Outside of Ethiopia’s larger cities, people relied on wood fires to heat their homes and cook. But after years of forest cutting, the Sahara Desert began extending its reach, which caused crops to fail. While deforestation played a part, there were more devastating changes afoot. Sulfate emissions from North America and Europe were cooling the surface of the Atlantic Ocean, which prevented moisture from being swept up in the air and returning to the ground as rain. The decline in rainfall in Africa’s Sahel desert region, combined with forest cutting and a chronic drought that spanned from the 1960s into the 1980s*, claimed the livelihoods of thousands of proud, generational farmers.

Tekola’s life, like those of most city-dwellers, was largely unscathed. But with Ethiopia’s agricultural-based economy in shambles, violence broke out. Militants, disillusioned with the Ethiopian government and newly enamored of communism, swept through Addis Ababa. Catching the city by surprise, they rounded up men of all ages, targeting the educated and wealthy, and gunned them down. Known today as the Red Terror, the genocide claimed more than 10,000 lives in Addis Ababa alone.

Tekola was 19 years old. He and other students were rounded up and jailed. But because his father was a well-known community leader and had left the military in the years preceding the war, he was later released. Two of his friends were not so lucky. After hearing about their murders, Tekola and a friend decided to flee the country.

Their escape began a journey that would send Tekola bouncing across the world in search of asylum. After years of traveling, he’d end up literally a half a world away in Seattle. 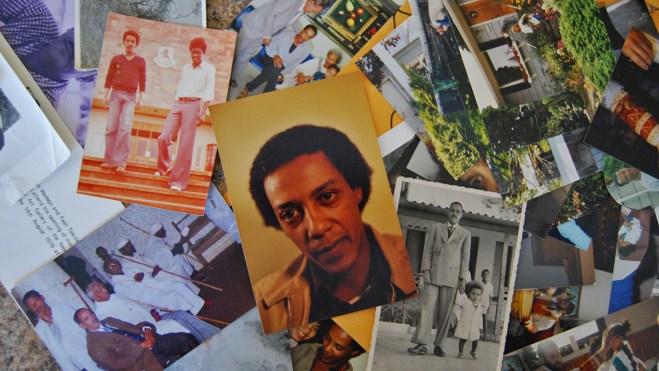 Tekola says he fled the violence not the drought. But the drought, exacerbated by human-caused climate change, likely created the conditions for civil war*. Climate change is a silent aggressor, which makes it difficult to pinpoint it as the sole culprit in droughts, hurricanes, or typhoons. Events like these set Tekola and many others like him into motion — and such disasters are happening with greater frequency as global temperatures rise.

The term climate refugee is controversial, says Ellicott Dandy, a policy associate at OneAmerica, a Seattle-based immigrant justice group. The United Nations has no official designation for climate refugees in its refugee aid programs, Dandy says. “The U.N. has gone back and forth about using a specific designation that you point to to claim refugee status. [In general], that’s a really difficult thing to do worldwide.”

But because climate affects all aspects of human life, it can act as a catalyst for hundreds of subsequent events. “There are absolutely people who have been negatively impacted by climate change enough to force them to move,” Dandy says.

And there will be more. Today, between the rising sea levels threatening to swallow up Pacific island nations and the drought-induced civil war in the Middle East, hundreds of thousands of people already face the prospect of having to leave their homes.

A 2014 working paper from the National Bureau of Economic Research (NBER) reported that rising temperatures will make violent tensions more common. These include everything from rape and murder to more country-wide disasters such as government collapse and civil war.

“Small amounts of [temperature] change have tremendous consequences,” says Solomon Hsiang, assistant professor of public policy at the University of California at Berkeley who is a co-author of the NBER study.

The likelihood for intergroup violence, which includes everything from government breakdowns to civil war, will increase by about 11 percent per degree Celsius of warming, according to the NBER study. That means we’ll see a significant rise in violence long before we reach the 2-degree-C warming threshold set down by the Intergovernmental Panel on Climate Change.

“The 2-degrees-C number gets thrown around a lot,” says Marshall Burke, another co-author of the NBER study. “All our research shows that we will see substantial impacts below that.”

And in a cruel irony, many countries that will experience the worst impacts of climate change will be those least responsible for the climatic damage. Currently, developing countries are bearing most of the burden hosting people displaced by climate change, said Alex Lenferna, a Fulbright Scholar and PhD student at the University of Washington who focuses on climate justice. “There’s this compounding injustice going on. [These countries] are some of the least responsible for causing climate change and they’re also the poorest.” 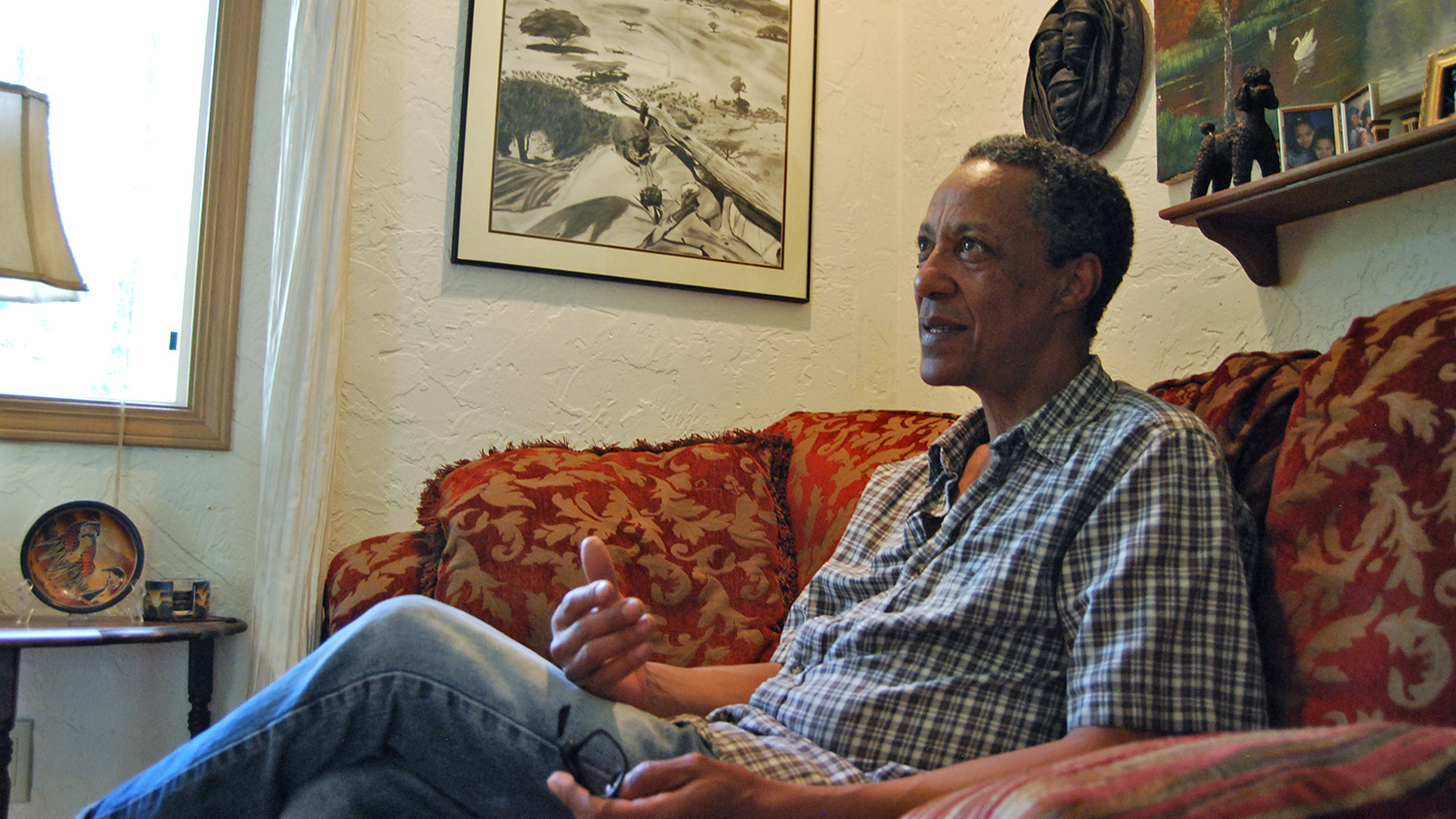 Tekola sits in his home in Maple Valley, Wash., an hour south of Seattle. The drawing on his left is one of his few remaining pieces from his days in Kenya. Grist / Ana Sofia Knauf

After fleeing Ethiopia, Tekola and his friend made their way to Nairobi, Kenya. To support themselves, the duo made North African-styled art to hawk to tourists. When they scraped together some money, they could stay in a hostel. When they couldn’t, they slept in one of the local parks. The friends were out of immediate danger, but they were foreigners in a neighboring country. And they couldn’t go back home.

After several months of scraping by in Kenya, Tekola saved enough money to get to Israel, where he had a brief stint working on a kibbutz, and then passed through Greece and Sweden. He attempted to apply for asylum in Stockholm, but did not have adequate identification and was eventually deported back to Kenya. By that time, he was 23.

Back in Kenya, Tekola attended college briefly, studying wildlife range management, and took an interest in environmental work. He left the university after a year and worked for a short time with the United Nations Educational, Scientific, and Cultural Organization (UNESCO), helping to address problems with desertification in African communities.

He first came to the U.S. in 1980, with an American girlfriend he’d met while she taught English in Kenya. After spending a couple months in Annapolis, Md., the couple took a cross-country road trip, eventually landing in Seattle. They drove into the city at night and ended up camping out in Volunteer Park, an urban oasis atop Capitol Hill, above downtown, with sprawling gardens and a commanding view of Puget Sound. Within a week of arriving to Seattle, they moved into an apartment across the street from the park.

“We decided to stay because [the city] supported interracial relationships,” Tekola told me, laughing over lunch at a local café. “The people were free and they didn’t restrict you. It’s a kind of world where I think of as God’s place.”

Tekola and Debby married in 1981 so he could get U.S. citizenship. He has lived here ever since. 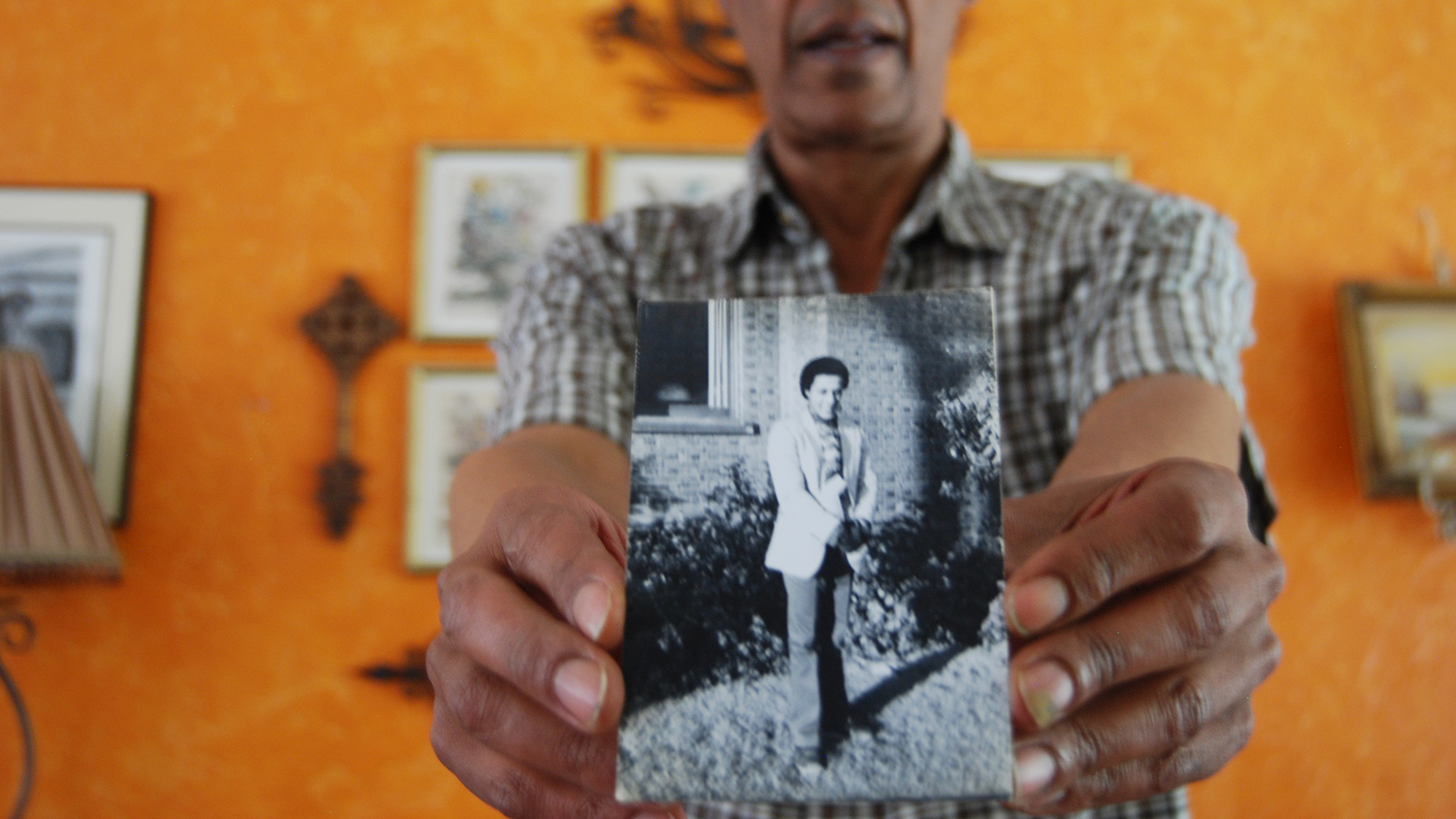 Tekola shows a photo of him taken on his first day of living in Seattle. Grist / Ana Sofia Knauf

As the world experiences seemingly small, but significant temperature spikes, Seattle could become a haven for more people like Tekola.

According to the 2014 National Climate Assessment, the temperate climate will allow Northwesters to weather the changes better that residents of other regions. And it won’t just be international immigrants who flock here. Between the drought in California and the Southwest, and more frequent, severe storms along the Eastern Seaboard and Gulf Coast, climate change will likely push populations around the U.S. as well.

We’ve already seen it happen in the aftermath of Hurricane Katrina, which saw hundreds of thousands of people displaced to neighboring counties and states.

In the 1930s, 2.5 million people left the Great Plains region when the Dust Bowl decimated agricultural communities. An exodus of Midwesterners headed for the coasts, with some 200,000 immigrating to California where they found there weren’t enough houses or jobs — let alone the discrimination the displaced faced.

The Great Plains are expected to see twice as many days above 100 degrees F by 2041 than in the latter part of the 20th century, and water shortages and drought will become more common, according to the National Climate Assessment. Hsiang says there’s about a 20 percent chance that the central U.S. could take on the more permanent climate conditions of the Dust Bowl. 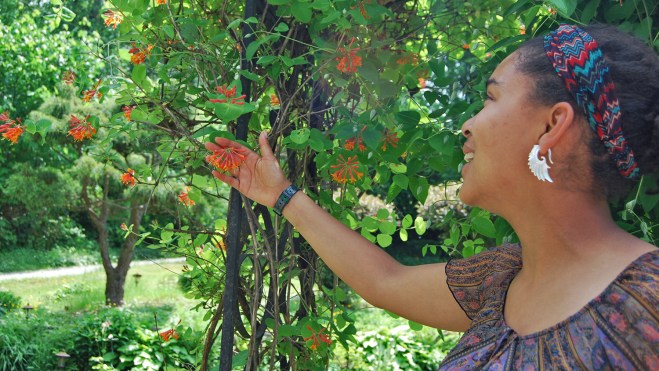 Sarra, Tekola’s second eldest daughter, points out a honeysuckle plant that is native to the Northwest. Grist / Ana Sofia Knauf

Today, Tekola lives with his second wife, Susan, in Maple Valley, about 45 minutes southeast of Seattle. The couple has four daughters, the oldest of whom is in graduate school, the youngest finishing up high school.

Sarra, the Tekolas’ second daughter, is an outspoken activist and recent graduate from the University of Washington’s environmental science and natural resources management programs. When I met her this spring, she was skipping out on a school lecture to speak out against a plan to allow the oil giant Royal Dutch Shell to harbor its Arctic drilling fleet at the Port of Seattle. She talked about how her father left Ethiopia because of drought and how Shell’s “climate bomb” would create new generations of climate refugees.

“His story has inspired me to do the work that I’m doing,” Sarra told me later. “My whole family is kind of displaced around the world. They all had to leave. When [scientists] talk about 2 degrees of warming, that really hits home because that’s like the displacement of the last few family members I have in Ethiopia. That’s going to uproot them from their homes.”

The family’s home is surrounded by a lush garden full of flowers and vines, perhaps an ode to the Tekola’s family farms back in Ethiopia. Sarra even monitors her own rain garden along the driveway. Inside, a few of the charcoal drawings Fasil made while living in Kenya hang on the walls.

Watching father and daughter, it’s clear that he worries about her activism. And she gets a kick out of telling him about the threatening emails she occasionally receives because of her environmental work.

But it is also apparent that, despite their good-natured tussling, Tekola admires what Sarra is doing. “It’s more than being proud,” he told me. “Sometimes I think, ‘Those are the kinds of things I wanted to do!’ … [The connection] is very special to me.” 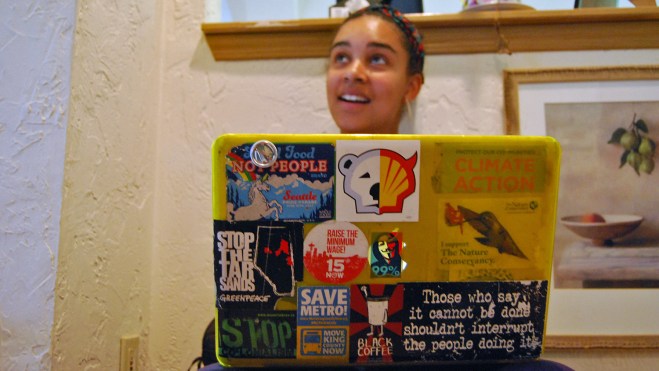 “As an American citizen, I have such a privilege to protest and to stand up for what i believe in without fear of death like my father had,” said Sarra, an outspoken activist and recent graduate from the University of Washington’s environmental studies program. Grist / Ana Sofia Knauf

*This story originally attributed desertification in Africa’s Sahel to forest cutting. While that was a factor, according to University of Washington PhD student and Fulbright Scholar Alex Lenferna, emissions from North America and Europe were the biggest drivers. Grist regrets the error.