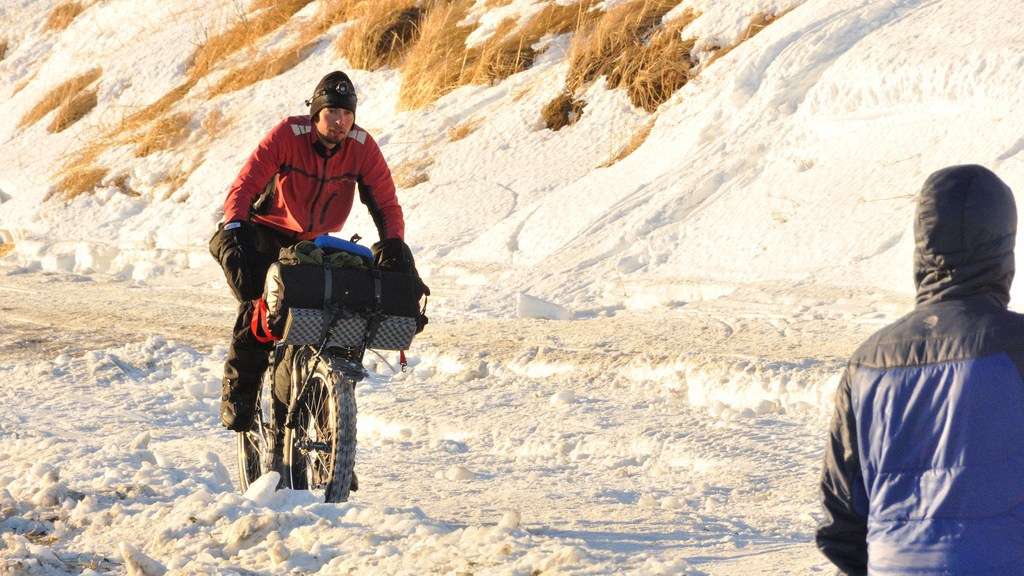 It takes a special kind of person to want to bike 1,000 miles through the dead of winter in Alaska (being hard as nails, or Iceman, helps). But if you’re going to do it, at least now you’ll get a little boost from global warming. Bicyclists on this year’s Iditarod Invitational — the foot and bike race on the same frigid route as the infamous dog sled event in Alaska (people do the weirdest things in the name of fun) — smashed records. And not because of doping: Less snow just made the course a little easier. Thanks, climate change!

Some thought it would be pretty much impossible for anyone to break Mike Curiak’s 2000 record of biking the course in 15 days (and not because contestants would suddenly wise up to the fact that biking 1,000 miles through snow is, well, miserable). But this year Jeff Oatley, Aidan Harding, and Phil Hofstetter finished the race in 10, 11, and 12 days, respectively.

But how? As The New York Times reports:

In January, when temperatures usually hover in the low 20s Fahrenheit, it topped 60 degrees this year. Sections of trail that have been buried under chest-high snowbanks were entirely bare, making for easier riding. In fact, R J Sauer, who finished the race in 16 days, said that on some days this year, he had more problems with mud and frozen tussocks than with snow.

Not that weird weather automatically implicates climate change. But Kevin Trenberth, senior climate scientist at the National Center for Atmospheric Research in Boulder, Colo., told the New York Times that he does think what went down in Alaska this winter is part of a broader climate shift. (A lack of snow also bogged down the canine Iditarod in March.) “It was extremely warm on the North Pole,” Trenberth said. “Alaska is already seeing many signs of climate change and will be profoundly affected.”

While that’s good news for Iditarod Invitational cyclists, it’s an entirely different story for those who opt to go on foot. Tim Hewitt should know: The 57-year-old lawyer from Pittsburgh, Penn., just finished his eighth Iditarod Invitational foot race. (That’s more times than anyone else has run it. And, oh by the way, he won five of them. Some years he was the only finisher).

“It was unlike any weather that I’ve seen on the trail this year,” Hewitt told me by phone. There were sections where “we probably pulled our sleds across 40 or 50 miles of just dirt.” While the lack of snow made it easier for cyclists to pedal across, it made it harder for foot-racers to manage their 45-pound sleds: instead of effortlessly gliding (OK, maybe not effortlessly), the sleds would get tangled up in rocks and roots. “It was more like pulling anchors behind you,” Hewitt said. “They didn’t slide. It was very frustrating.”

Hewitt crossed the finish line after 26 days, and while that wasn’t a personal best, his wife Loreen ran alongside him for the first time. If he returns to the Iditarod Invitational next year (all signs point to yes), he might want to consider swapping his sled for a wagon.