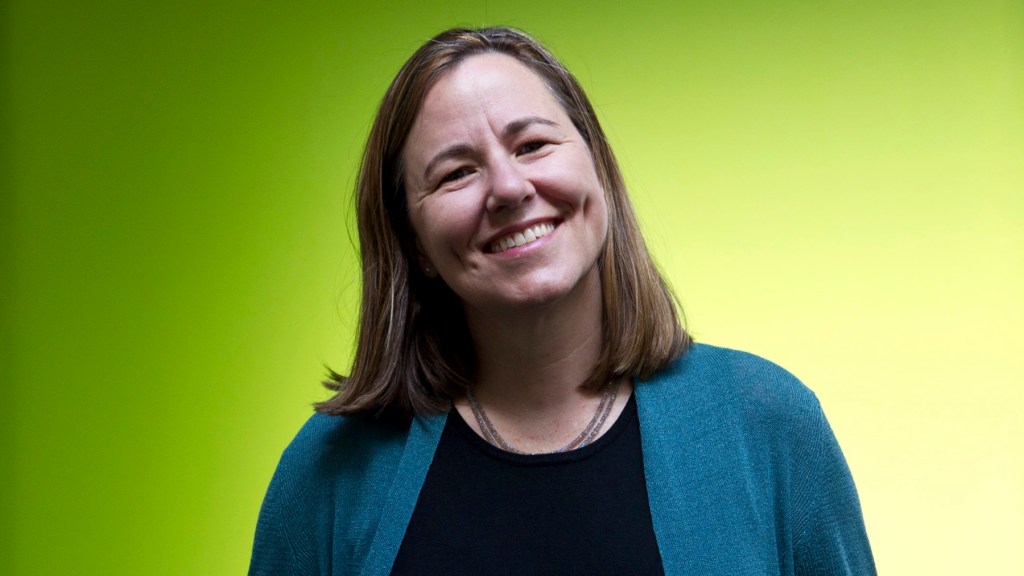 Erin Lubin/Greenpeace
Come out, come out, wherever you are

On Tuesday, Greenpeace USA announced that Annie Leonard, the force behind The Story of Stuff Project, will take the reins as the organization’s new executive director.

Leonard first made a name for herself in 2007 with the release of her 20-minute web video The Story of Stuff, a clever animated explanation of where our stuff comes from and where it goes after we throw it away. It quickly went viral, and that led to more explainer videos, a bestselling book, and a successful nonprofit. So she has plenty of experience engaging audiences on topics that might seem mundane or off-putting, but in fact have far-reaching and large-scale consequences. (For example: where your iPhone comes from, and where it goes to die when you spill beer on it. Whoops!)

We got to talk to Leonard about how her work with The Story of Stuff Project has prepared her to take on new challenges at Greenpeace. First and foremost: helping more people realize that they are environmentalists – whether or not they identify with the dirty word itself – and they need to fight for change accordingly.

Q. What’s first on your to-do list when you start work at Greenpeace in August?

A. One big priority is building connections between other organizations not only in the progressive moment, but also beyond it — with organizations whose success is intertwined with our own. The more we look systemically at the problem, we see that issues from economic inequity, to women’s rights, to civil rights, to environmental justice are so interconnected. I think that for many years we’ve obstructed the progress of our collective movement by seeing these issues as different from each other. So I’d like to reach out to what I call “unlikely partners,” to figure out how we can help each other, because it’s just increasingly clear to me that we are all going to succeed or fail together. And if we can work together, we will have a smarter and a stronger overall movement.

Personally, that goal has especially grown because of my experience with The Story of Stuff. When I released the first Story of Stuff film, I got hundreds of thousands of emails from people who said, “I’m not an environmentalist, but I really care about these issues.” They said they’d never responded to environmental messages before, but they shared the same concerns and values. And I thought, “Gosh, what are we doing that people think they can only work with us if they’re a self-defined environmentalist?” And the fact that people had to actually distinguish themselves from environmentalists — I thought, “That is a problem.” So we’re figuring out how Greenpeace can do its incredibly good work in a way that’s more inviting and accessible and relevant to a broader number and diversity of people.

Q. So how do you want to change Greenpeace’s activism to reach out to this audience — people who care about the environment, but don’t identify as environmentalists?

A. There are two parts to that. First, we already have a tremendous membership base, and that membership base is loyal and generous and committed. Their contributions have allowed Greenpeace to be so strong and independent, and that’s really important. I want to start by reaching out to our supporters, thanking them for their commitment, of course, but also encouraging them to broaden their ideas of what it means to be a Greenpeace supporter. We really appreciate their contributions, but we also hope that they’ll get involved in letter-writing and advocacy campaigns and attending local meetings, and protesting in the street when necessary.

And second, in terms of reaching beyond the Greenpeace core, I want us to be more skillful and experimental in how we communicate. One of the things about environmentalists, especially if you’ve had any kind of scientific training, is that we are really data-driven people. And anybody who looks at the current data about the state of the planet and understands them knows that they are incredibly compelling. So for those who know that there is all of this amazingly terrifying data, it is hard not to lead with that. But I’ve learned over the years that leading with data and facts does not touch people’s hearts in the way that we need to do to increase their involvement in these campaigns.

So I’d like to encourage Greenpeace activists to have all their numbers and facts correct, but keep them on tap, not on top. That is what’s really going to inspire people — if we can speak a language that’s familiar to them, if we can articulate a vision for how things can be better, if we can be accessible and inspiring – not just bombard people with data. It does take restraint, though, for people who understand the data, because it’s so compelling that you just want to run down the street yelling it.

Q. Are you planning different types of media in that regard, like you did with The Story of Stuff, to make that data more appealing and accessible?

A. Absolutely. I think there’s so many ways that we can say the same thing without corrupting the information — we can speak the truth and still relate to different people. Saul Alinsky, one of the famous community organizers from the 1950s, wrote a sort of manifesto of basic rules for organizing, and one of them was: “Talk to people where they’re at, not where you’re at.” And when you’re so deep in information, and you have all these facts and figures, it’s so easy to forget that not everybody else is there with you. We need to pause and think: “Who are we speaking to and what aspect of this would be most relevant to them?” Greenpeace is already doing such a great job on this.

Story of Stuff — which is still going to exist — has been such fascinating experimentation with communication and shrinking the gap between online context and offline engagement. It was kind of a lab for this kind of stuff. So Story of Stuff and Greenpeace are going to be collaborating to share lessons and experiences there.

Q. Time for a bit of reflection: How have you seen environmental activism change since you first launched your career at Greenpeace 25 years ago?

A. I think it’s changed in some positive ways and in some ways that concern me, which is one of the reasons I wanted to come back. I think that some of us within the environmental movement have been beaten down, because trying to get environmental policies passed is like beating your head against the wall. I see people getting tired and demoralized and feeling that the change is not keeping up with the need — which, clearly, it isn’t — but I think it is so important that we not be demoralized. In fact, we should roll up our sleeves and dive in even harder — partly because the actual empirical evidence calls for it, but also because people are ready.

Right now, there’s an openness and a readiness to work together for solutions in the American public that I have not seen in my entire life. The evidence that our current model is not working is just increasingly clear, whether in terms of the economy, the environment, or health. There’s a hunger for doing things better, and environmentalists need to jump in and help steer that.

I think that some environmentalists have gotten too cautious. In this era of it being so hard to move things politically, sometimes we confuse political reality with physical reality. We look at what’s needed — for example, building a clean energy economy — and it’s so easy to then look at the paralysis that is our government and say, “Oh, it’s not possible.” But it is totally possible to build a clean energy economy. It is totally possible to figure out how to make and use and throw away stuff that doesn’t involve toxic chemicals and poisoning workers and the planet. It’s all absolutely possible. I want us to bust through that delusion that change isn’t possible, and work more courageously and boldly.