With the world’s attention focused on Paris as leaders negotiate a plan to deal with climate change, artists and activists have turned the city into a canvas for some fascinating art projects. The changing state of our planet can seem intangible, but these artists’ efforts seek to make it feel real.

1. “Ice Watch,” an installation by Olafur Eliasson and Minik Rosing, features 12 huge, melting blocks of ice (harvested from icebergs in Greenland) arranged in the formation of a clock. 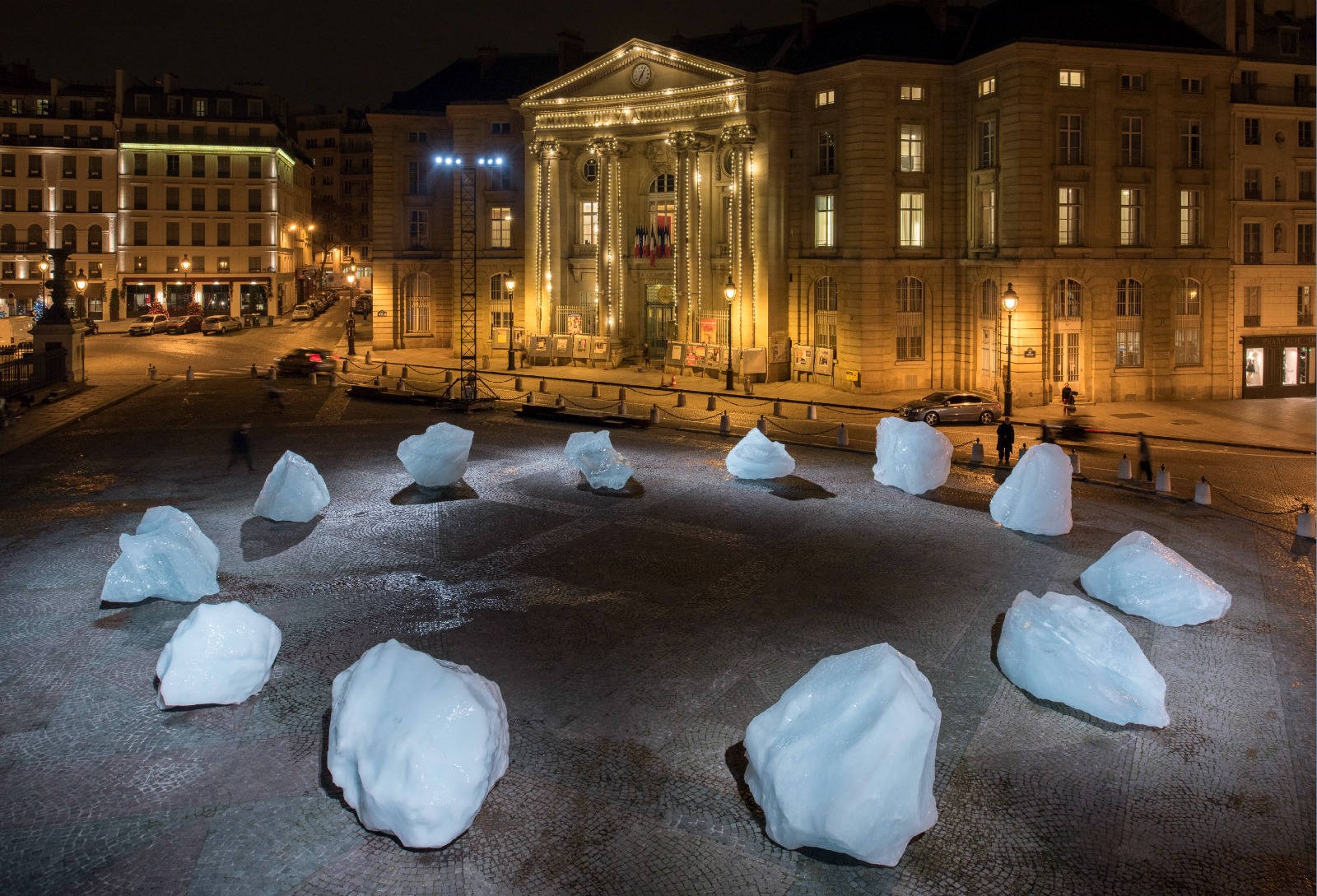 2. The eight-meter-wide orb hanging from the Eiffel Tower isn’t a gigantic Christmas ornament (though it does look like one). It’s actually “Earth Crisis,” a sculpture by activist and street artist Shepard Fairey, meant to inspire action to protect the planet. 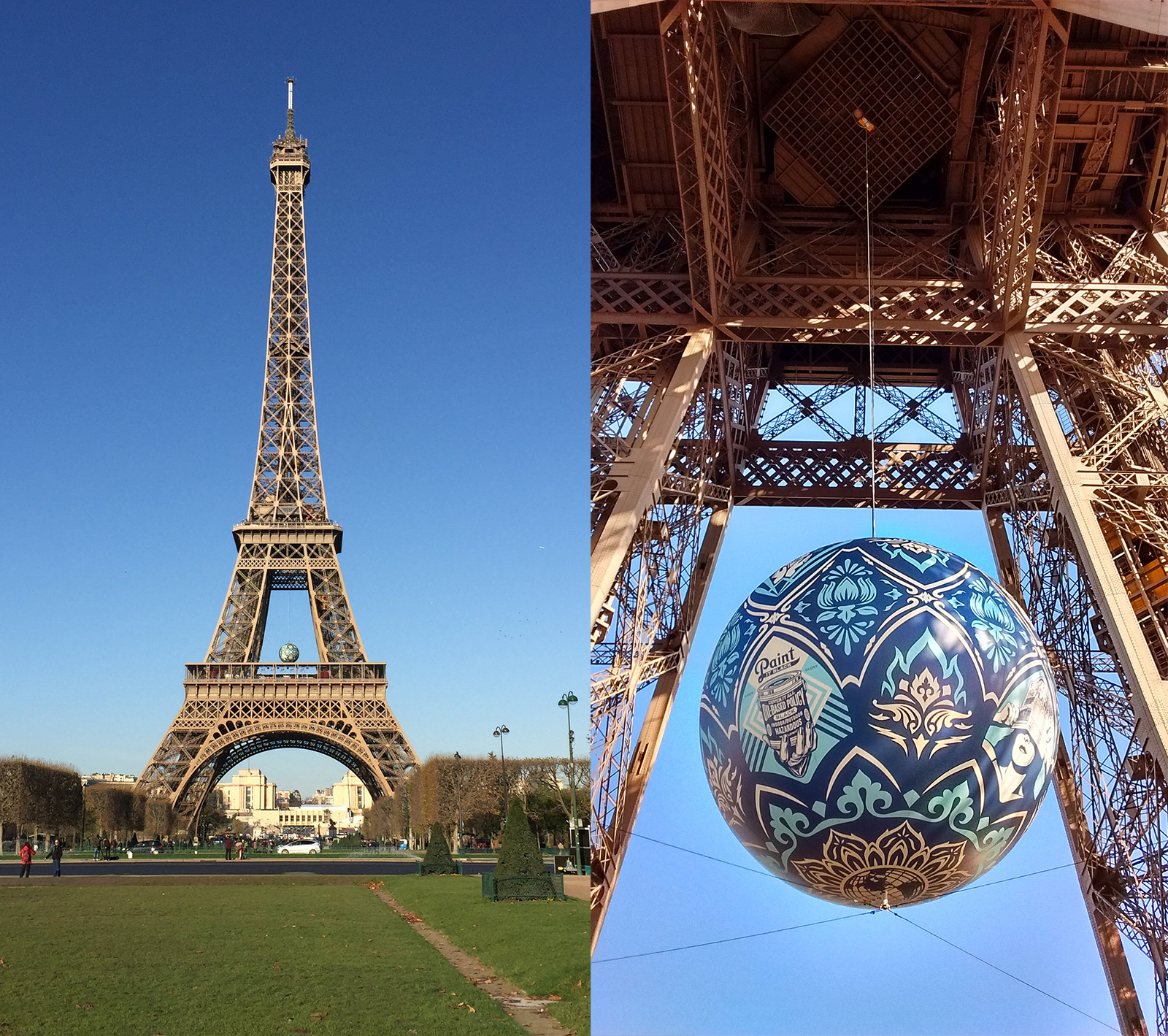 3. “The Standing March,” a collaborative video by French artist JR and filmmaker Darren Aronofsky, projected images of faces onto Parisian buildings to remind leaders at the climate talks that the world is watching.

4. Activists plastered Paris with 600 subversive ads that took aim at corporate polluters — some of which are sponsoring the Paris talks — as part of the Brandalism project.

5. A series of 140 plastic animal sculptures by French artist Gad Weil called “Climate Noah’s Ark” has been traveling around Paris to draw attention to species threatened by climate change. 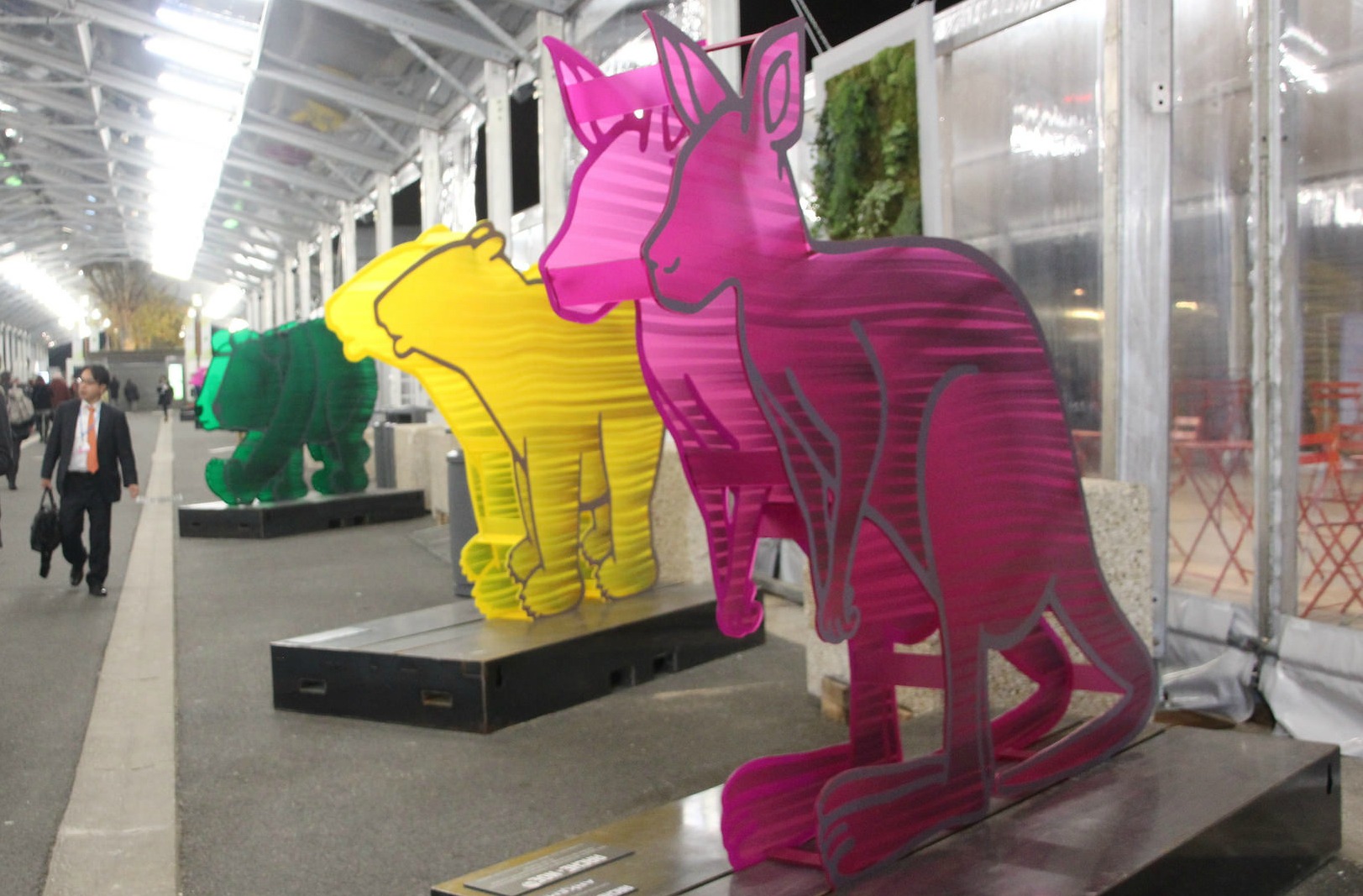 6. Danish sculptor and activist Jens Galschiot teamed up with World Wide Fund for Nature to create this sculpture of a life-size polar bear pierced by a spear. (Hint: The spear represents climate change.) 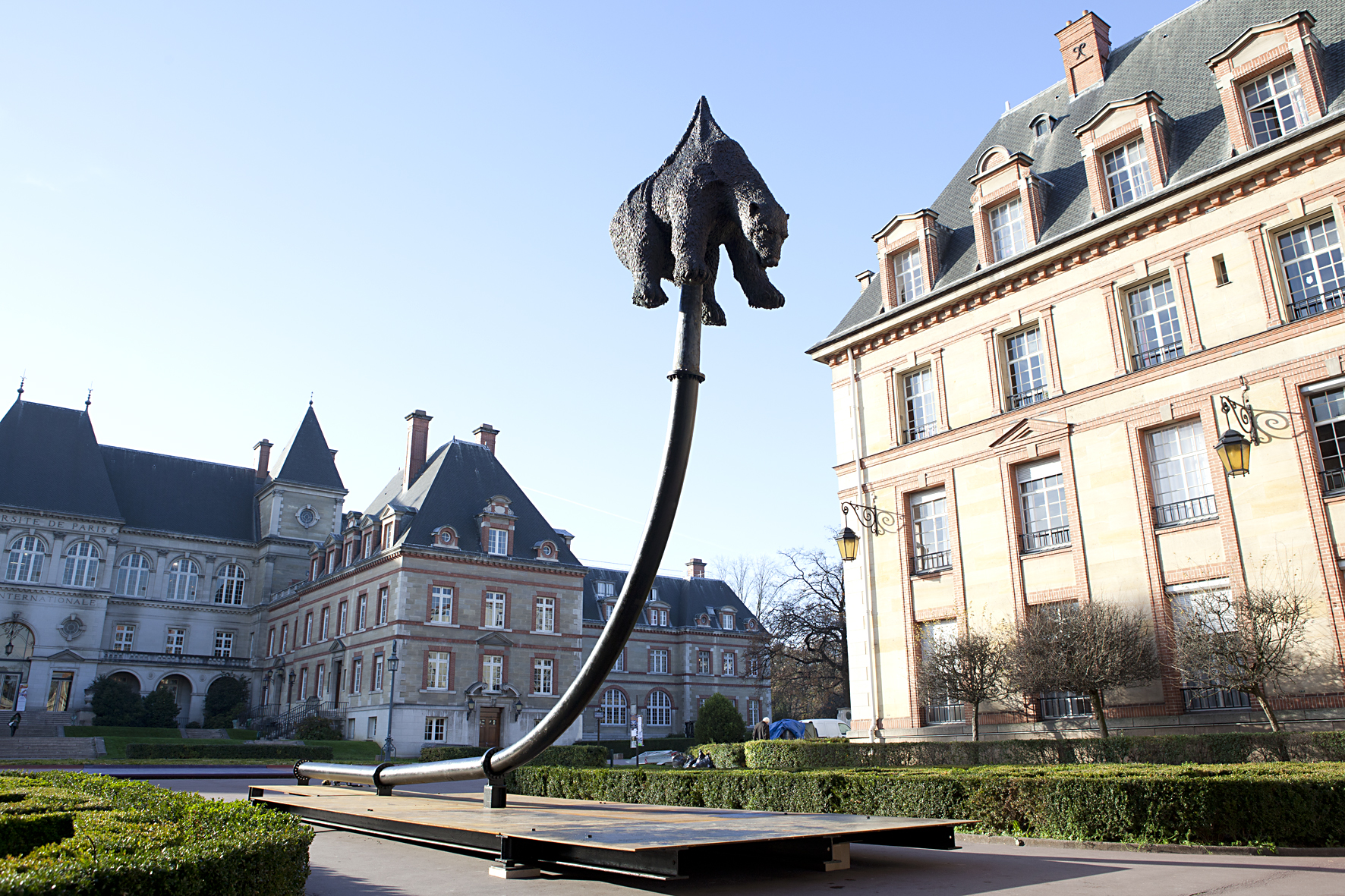 7. Not to be outdone, Greenpeace lugged its huge, mechanical-looking polar bear, “Aurora,” to Paris to bring attention to the effects of climate change on indigenous peoples. 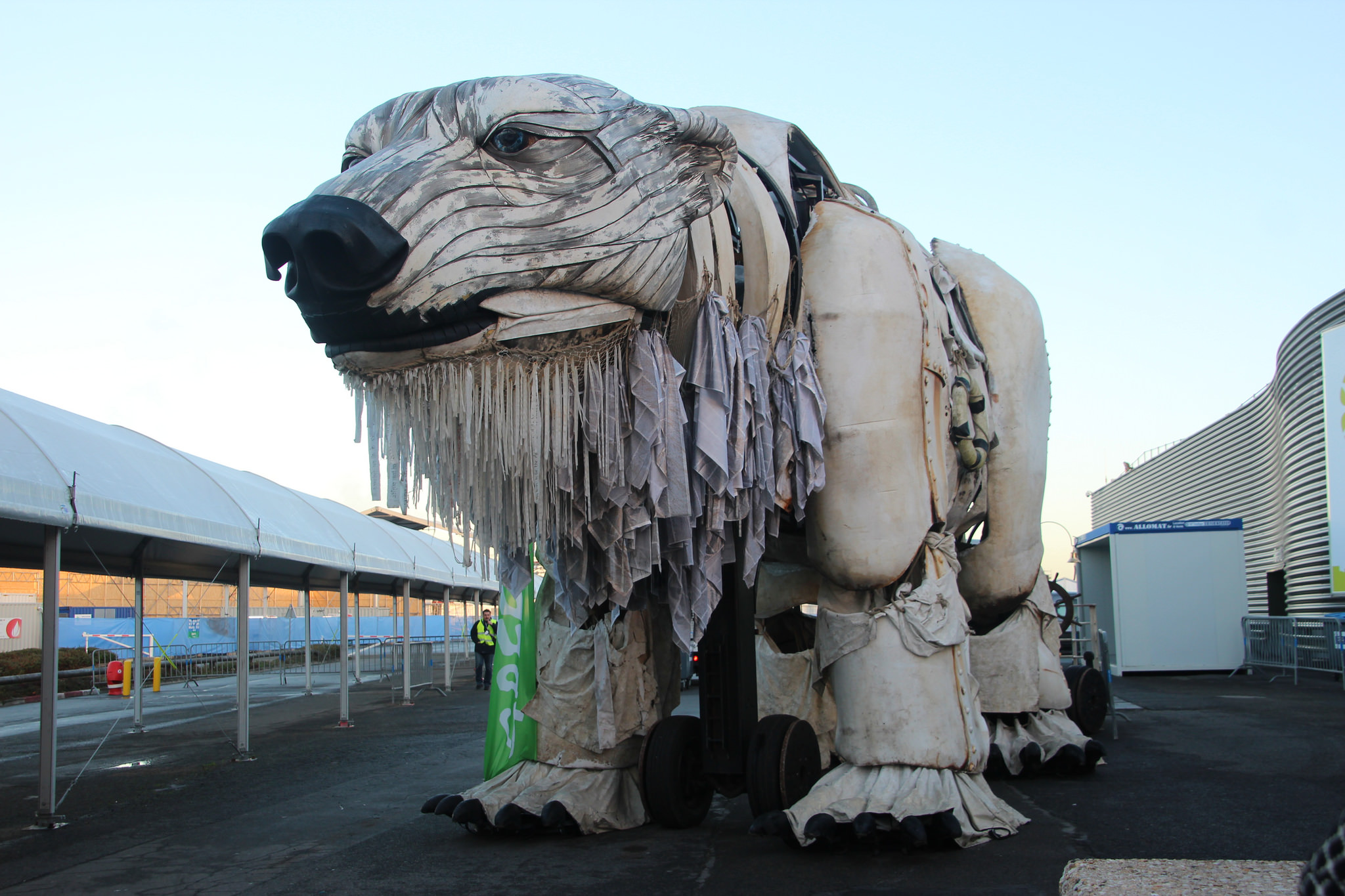 8. These 33-foot-tall “wind trees” displayed outside the U.N. Climate Conference site might not blow you away — until you learn that they’re working wind turbines that generate 2,400 kilowatt-hours of electricity a year, created by NewWind. 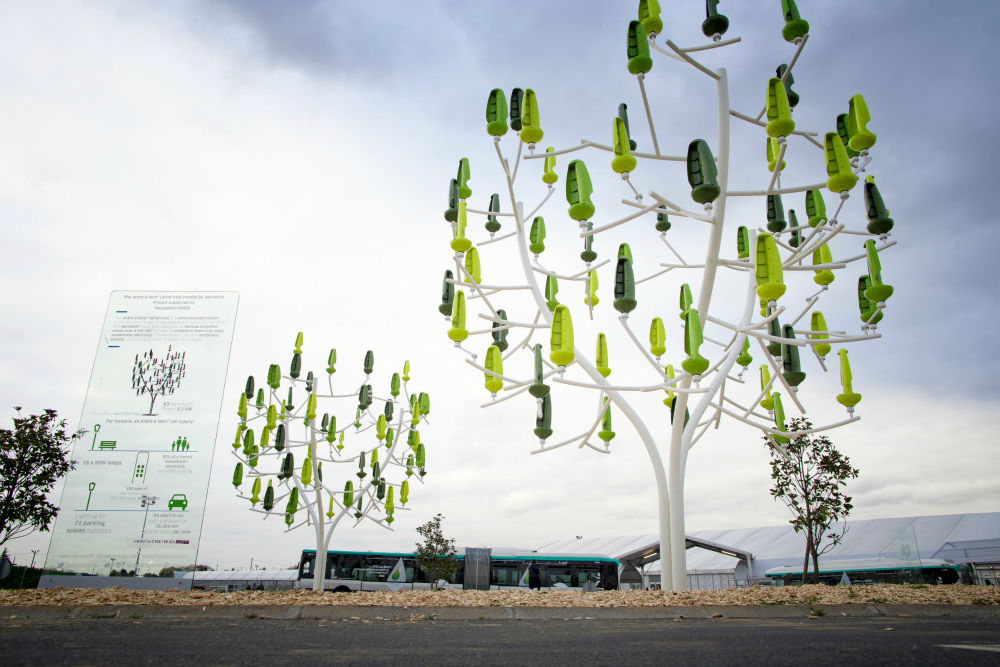 9. Yann Toma, a French artist, lit up the Eiffel Tower with dazzling displays in a series called “Human Energy.” The project is powered by “virtual energy” generated by the millions of users of the app Runtastic. 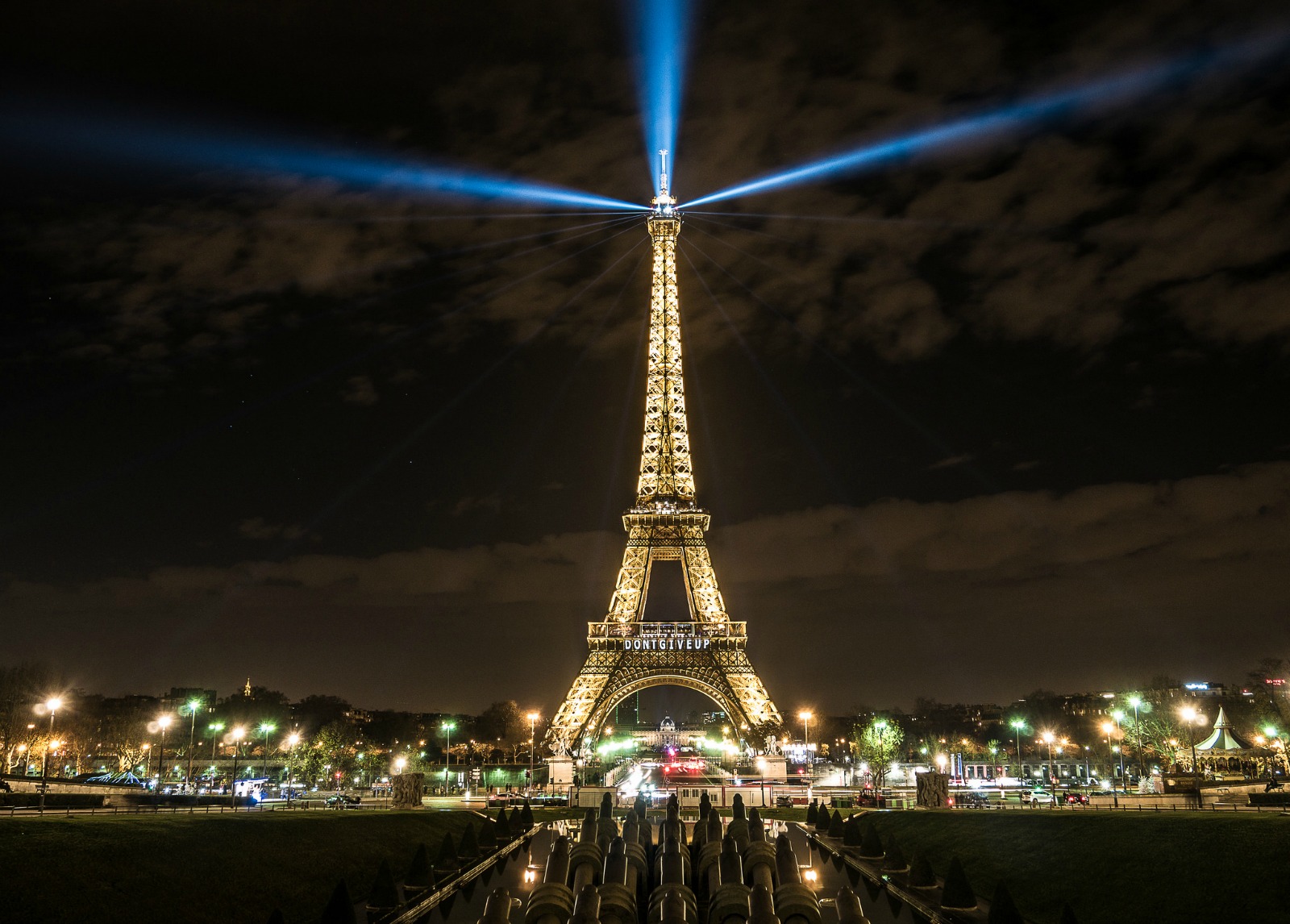